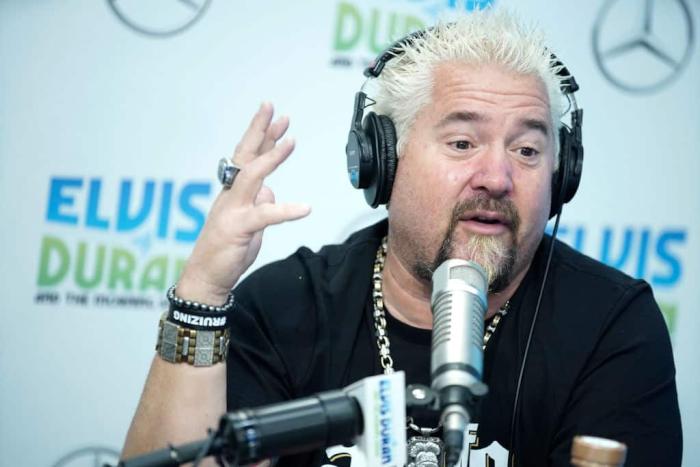 First Class to Flavortown: The Revenge of the Pop Culture Punching Bags

With statues and monuments of slave-traders, colonizers, and Confederate losers toppling across America, some citizens of Columbus, Ohio, have turned their attention to their city’s namesake. Why bother keeping noted genocidal rapist Christopher Columbus as your city’s patron saint of sorts when there are other, truer American heroes to celebrate? That’s why one resident has started a petition to have Columbus renamed in honor of a true local icon: Guy Fieri. The spiky-haired, backward-sunglasses wearing lover of the finest trashy dining has long been the Mayor of the mythic world of Flavortown. Now, Woodbridge and close to 76,000 others are hoping to make that dream a reality.

Is this petition a prank? On some level, it has to be. Will it actually happen? Hell, no. What remains so fascinating and oddly uplifting about this cause, however, is the genuine sincerity behind the obvious irony of such a concept. It’s another step in the direction of public redemption for Mr. Fieri, a man who has been a pop culture punching bag from the first moment he stepped into the spotlight.

Scaachi Koul wrote a piece for Buzzfeed declaring Fieri to be ‘the only good food person left’, in the aftermath of the Alison Roman scandal. It’s an exaggeration, of course — hello, Samin Nosrat, among many others — but Koul did tap into something that explains why Fieri, among many other former pop-culture punching bags, have seen their fortunes change in the public consciousness. Koul noted how Fieri had raised tens of millions of dollars for a restaurant workers relief fund during the ongoing pandemic, as well as his support for gay marriage and the work he has done in feeding and aiding thousands of evacuees during the 2017 California wildfires. There’s more to it, however, than his good deeds. The man with the flame-covered shirts and try-hard names for his grease-laden recipes suddenly became a meme of pure earnestness.

He’s not alone in that endeavor. Think of how Nicolas Cage went from critics’ darling to industry joke to beloved internet hero of self-aware mania. Look at the evolution of Britney Spears after years of being mauled at by the media, or Rebecca Black’s post-‘Friday’ triumph. Even the Insane Clown Posse are getting their dues thanks to their oddly progressive politics and adorable dad support. Some of these about-turns have been a long time coming, so what’s behind it all?

A driving force behind the initial backlash against many of these figures is good old-fashioned classism. Fieri is frequently referred to as ‘trashy’ and other derogative terms that are rooted in the notion that he is of a lower class and ergo undeserving of ‘legitimate’ respect, both personally and professionally. Britney, one of the long-time princesses of pop, is a Tennessee girl whose rise, fall, and revival in the world of music and celebrity is inextricably tied to perceptions of her ‘trainwreck’ status. The ICP typically evokes images of angry working-class white dudes chugging cheap soda and causing a ruckus. It’s easy to deride such a figure thanks to that potent combination of societal disdain for the lower-classes and tall poppy syndrome, a phenomenon where the public feels the urge to cut down those who they see as having risen above their station in life.

So-called guilty pleasures are often rooted in the derision of ideas, hobbies, and entertainment that is unabashedly enjoyed by marginalized groups who are easy to pick on, most notable teenage girls and Black women. This notion’s intersections with class are less widely discussed but are evident across the board. Having this discussion has proven more difficult over the past few years as the concept of the working and middle-classes have been weaponized by bad-faith right-wing politics as an excuse to elevate racism and bigotry as justifiable in society. It’s a strange bind to be in, to see this false representation of working-class people deified as the patriotic ideal all while the most infamous cultural markers of that are thrown to the wolves.

Of course, such backlash isn’t exclusively an unwarranted phenomenon. The ICP’s history is hardly squeaky clean, nor is Fieri’s. Both have made some amends in terms of atoning for controversial and nasty comments and behavior in the past, which won over many fans. Still, it’s worth noting that many of the beloved pop culture punching bags getting their moment in the sun are white and that such privileges are seldom awarded to people of color in the same manner.

There’s something to be said for true, wholehearted earnestness, for an evidently authentic display of kindness and charm that goes against our natural cynicism as well as the more calculated aspects of celebrity. Think of Ellen DeGeneres, a wildly famous and beloved talk-show host whose entire brand is the weakest dilution of niceness for the masses, a powerless platitude that she has literally commodified into clothes, accessories, and subscription boxes. She has made that message so indomitable that it’s taken until the past year or so for the widely spread stories about her bullying behavior and mistreatment of her staff to emerge to the forefront of the gossip conversation. While such revelations haven’t tarnished DeGeneres’s image entirely, she has certainly taken a hit over these past few months and made a lot more people question the ethos she’s selling. When niceness in the current celebrity ecosystem is so unfairly dominated by the likes of DeGeneres and every political commentator who thinks calling out white supremacy is a form of ‘but both sides’ bullying, it’s no wonder we’re hungry for a return to cheesy simplicity.

Said simplicity also has its own near-primal appeal. Sometimes, you just want easy-to-understand pleasures in life. It’s not hard to see why Fieri’s everything-but-the-kitchen-sink approach to fine dining would be so tasty, or why there are few things more joyous than screaming along to ‘Work B*tch’ in a club after four margaritas. The world is dark right now. We want unfussy joys. We need something that makes us happy, screw the haters.

Moreover, these are stories of redemption, but perhaps not so much of the subjects themselves. Britney Spears did not need to be redeemed. She didn’t do anything wrong. She was a troubled woman who had a public meltdown and was mocked for it, something a whole lot of us joined in on at the time, whether we want to admit it or not. It took us far too long to realize how abhorrently she’d been treated, and now we cannot help but want a lifetime of good things for her. Just let her live her life. It’s the least she deserves after everything we put her through.

Perhaps we’re done with pretensions, at least during this strange moment in time. Maybe we simply need things and people who make us happy through the sheer force of their own oft-mocked pleasures. Pop culture is full of enough figures whose sunny exteriors conceal darker or crueler rhetoric. It’s time for the ridiculous to rise.

← Brie Larson Has Decided To Be A YouTuber | What's Streaming On Netflix In July 2020, Plus Disney, Peacock, Amazon, Hulu, And Apple →