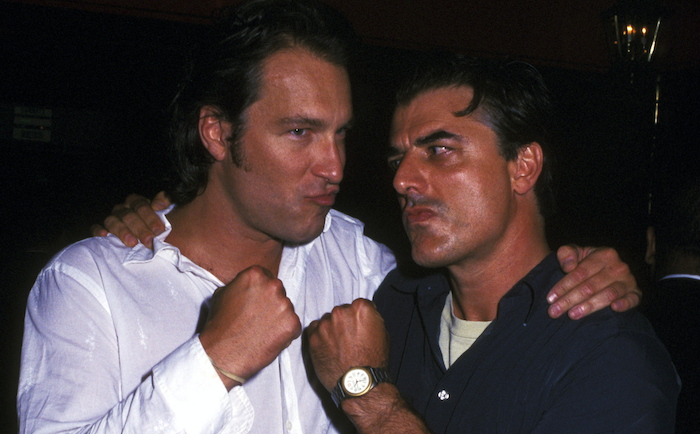 Friends, today’s post is going to anger you because it will reveal something about me—f*ckbois are kind of my kryptonite. I bring this up now to prepare you for my answers for the eternal game of F*ck, Marry, Kill (or as we called it growing up, “Screw, I Do, Boooooo.”)

See, I woke up today and this lady’s tweet kept popping up in my timeline, so I figure, why not?! Let’s play this thought exercise out, shall we?:

Okay who do we f*ck marry kill pic.twitter.com/GRuXNMwJ40

So let’s do this— F*ck, Marry, Kill for Steve, Aiden, and Big of Sex and the City fame.

Look, I hate myself for this answer, but I would 100 percent go down this path with Big. I know he is the worst. I know he is a f*ckboi—but you know what? I f*ck with fuckbois, usually for far too long. Just ask my friends. It’s not a good look, but I know who and what I am, and I know without a doubt that this is the category Big belongs in, for me. Also? This is one of my favorite scenes in the entire show and we have Big to thank for it, so there you go:

Any dude who knows that “Moon River” is a classic can’t be all bad.

Obviously you marry Steve, as Miranda did. I didn’t love how they made him a cheater in the movie, but overall, Steve is calm, cool, collected and keeps his s*it about him when you’re melting down. That’s someone you want to have in your corner, friends—all I’m saying. Granted, being married to a bartender might be a pain in the ass to coordinate schedules since he works super late, but overall it’s worth it to be married to a normal, nice guy.

So, I never liked Aiden. At all. I could come up with reasons to justify said dislike, but I’m going to be honest—I disliked him first and then I came up with the reasons to justify it after the fact. He’s just not for me. I like my dudes uptight and withholding, instead of kind of sloppy and open, what can I say?!

Besides, it’s not like I’m the first one to opt to kill Aiden— they completely assassinated his character in the second movie already. I’m just late to the party!

Now, usually when you dump on Aiden you get everyone chiming in about how Carrie was the absolute worst, and yes, she was pretty terrible. Even though she catted around on Aiden, I still have a very soft spot for Carrie, because I like messy people. Big and Carrie were well suited for each other (moreso than Aiden was for her), and overall, he’s my favorite of all her boyfriends. The less that can be said about Berger, the better. Aiden obviously tops Berger.

Anyway, that’s my grouping, what’s yours?

← Harry and Meghan Announce That They Will No Longer Cooperate with British Tabloids | What's Going On With Ben Affleck and Ana de Armas? →