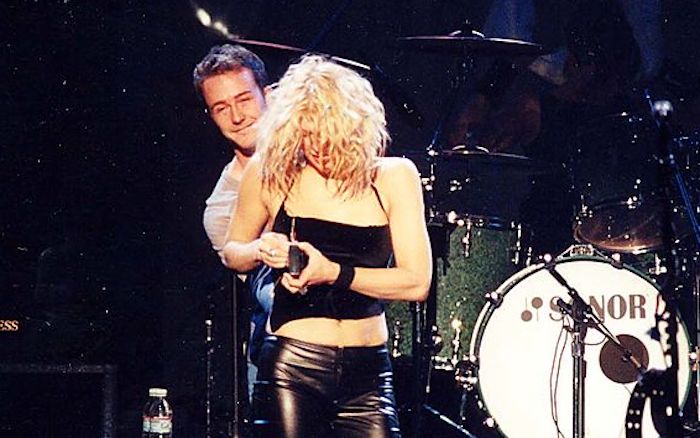 Courtney Love appeared as a host on Marc Maron’s WTF podcast this week to promote her forthcoming solo effort but mostly to shoot the sh*t with Maron. At nearly 60 years old, Love has been in the industry long enough and through the recovery process enough times that she doesn’t have any f**ks left to give, which would make her a publicist’s nightmare but fairly compelling as a podcast guest. She’s like a steam train who doesn’t stop talking long enough even to hear Maron ask questions. It was basically the Courtney Love hour. I’m not complaining.

One particular subject that came up with Love’s former boyfriend and fiance, Ed Norton. Coincidentally, Norton is also the guest on the Smartless podcast this week, although you’ll likely find out more about the actor from Love than on Smartless, where Norton comes off as a dick even in the relatively safe confines of that podcast. For those who don’t know, Norton is not a nepo baby in the traditional sense, but he comes from a lot of money (obvious in the way he spits “public school” with a certain derision), and Love claims that the two ultimately didn’t work out because of the vast class differences between the two.

Love also spoke about her role in Fight Club, where she was famously fired and replaced with Helena Bonham Carter. A couple of years ago, Janeane Garofalo claimed that she was up for the role, and the only reason she didn’t get it was because Courtney Love was Norton’s girlfriend at the time.

Love denies that. In fact, she said on the podcast that she “thinks” she may have been the one who brought the Chuck Palahniuk book to Fincher to begin with, and she was excited to work with him. In either respect, the “lawyers talked to the lawyers” and hammered it out, and Love landed the role.

Meanwhile, Love also said that around the same time, she received a call from Gus Van Sant, who was apparently having dinner with Brad Pitt and the two were talking about doing Brokeback Mountain back when the script was more “X-rated.” Van Sant apparently told Love while Pitt wasn’t around that Pitt was guarded about his sexuality. “You know how he is about his sexuality,” Van Sant told Love.

However, once Pitt and Van Sant both got on the phone with Love, the “Hellmouth” opened and Pitt started talking about doing a Kurt Cobain biopic. “I went nuclear,” Love said. “I don’t do Faust. Who the f**k do you think [inaudible].”

“And then [Norton] gets home,” Love continued. “He starts sobbing … and he was like, ‘I don’t have the power!’” Soon thereafter, Love’s “landline rang. It was David Fincher. And I knew it was going to be him … and he fired me because I wouldn’t let Brad play Kurt.”

Love went on to say that Cameron Crowe once told her that “Brad Pitt was put on this Earth to stalk you for Kurt, which has been going on since 1996.” Love said that, even as recently as 2020, Pitt’s production company, Plan B, wanted to produce a Cobain biopic, but she declined because, according to her, Brad Pitt “didn’t get” Love. She said she went nuclear on Pitt again, however, when she learned that Plan B had a piece of her deal with Warner Brothers.


← 'Babylon' Bombed at the Box Office, and the Reaction Is Divided | Reddit Asks the Question: 'Which Actor Pairing Had the Best Screen Chemistry?' →