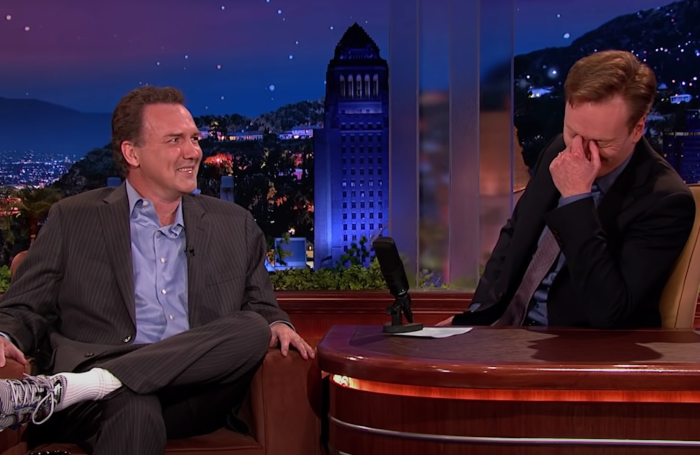 Norm Macdonald passed away earlier this week, and I am sure that within 30 seconds of the announcement, someone posted “The Moth” joke from Conan to pay tribute to the late, great comedian. I must have watched it at least four times all the way through on Wednesday and even passed around to some folks who wouldn’t otherwise know Norm Macdonald (YOUTHS). It is a quality joke — the seeds of which came from another “Update” anchor Colin Quinn — but what’s interesting about it is that the joke wasn’t planned. Norm Macdonald came up with that on the fly after Conan asked him, unexpectedly, to stick around for another segment.

Yesterday, Conan, Andy Richter, and their longtime producer, Frank Smiley, devoted an entire podcast to the memory of Macdonald, and in doing so, discussed the origins of The Moth.

“I’m so happy that the Moth joke is getting circulated so much from our The Tonight Show,” Conan said, “because it is completely outrageous what he is doing. It’s The Tonight Show and he is telling this very long story, and he is taking all the time in the world. I love it just because even though I was there, I’m delighted every time I see it because what he’s doing breaks every rule. ‘Brevity is the soul of the wit.’ That is the rule. And man, he completely — like Picasso — blew up the form. He goes and he tells this joke forever, and he finally gets to the punchline and you can see that everyone is delighted. He has broken every rule in the book.”

However, the reason The Moth joke exists is because he was only supposed to do one segment. He had a second segment sprung on him during the commercial break.

“When I had Norm,” Conan added. “I was greedy. I always wanted more Norm. But when we asked him to do a second segment, he had nothing planned. Absolutely nothing planned.”

“He did that joke from Colin Quinn,” Smiley continued. “He did the segment. He only had seven minutes prepared. When [Conan] said, ‘We’ll be right back with more Norm,’ he had nothing prepared. And then he remembered the Colin [Quinn] joke. It was a 20-second joke. And he asked [Conan], ‘How long is the segment?’ and he was hoping [Conan] would say ‘20 seconds.’ But [Conan] said seven minutes. So it became a 7-minute joke.”

“He’s doing this on the fly,” Conan said. “His way to slow it down is to invent a Chekhov play with Russian names and an ineffable sadness with life weighing on the character’s soul … I have never met anyone who would take that chance and make that choice, and I’ll never meet anyone like that again.”

“The joke doesn’t even matter,” Andy Richter chimed in. It’s about “taking a stroll through this guy’s brain.”

And what a brilliant brain it was.