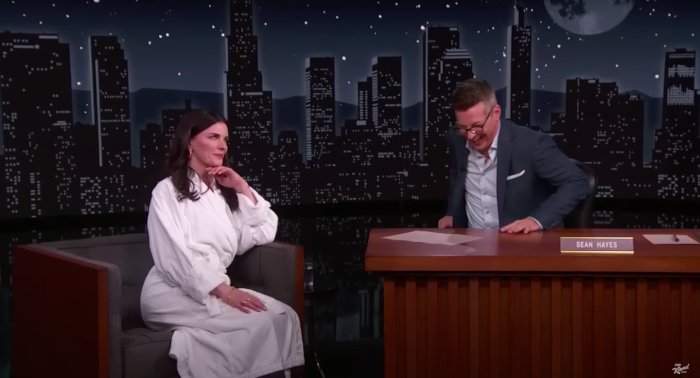 British Airways Lost Aisling Bea's Luggage, So She Went To 'Jimmy Kimmel' In A Bathrobe

First, since this involves one of our beloved Pajiba 10 candidates and clothes being lost, there’s a good argument that I might need to be preemptively bonked in the head by a certain Shiba pupper. So, let’s get that out of the way(fu).

So Aisling Bea is in the US as a guest in Paul Rudd’s Big Slick Kansas City 2022, the charity he started with Rob Riggle and Jason Sudeikis. Unfortunately, British Airways lost her luggage in between connecting through London and O’Hare, which is not optimal when she has other comedy sets to play and probably a few FYC commitments for season 2 of her gem This Way Up. Wouldn’t be “British” without mismanaging the property of the Irish.

Celebrity reps are well-trained for this kind of situation. There’s probably a whole org chart at CAA or Endeavor on how to procure emergency designer clothes. But since Aisling is very serious about sustainable fashion and using clothes more than once, that probably wasn’t an option for her. So when going to Jimmy Kimmel last night (guest-hosted by Sean Hayes), and being a force for Chaotic Good, she chose to go with her hotel’s proprietary, “If you would like to take this, a charge will be billed to your account” collection. She also took the time to do an Amber alert-style plea to recover her luggage. Get it together, British Airways! You’re risking a diplomatic impasse that the UK cannot afford.

The whole interview is as hilarious and charming as you might expect from Aisling, and yes, she pulls the robe and slippers off too. Stream This Way Up, people.