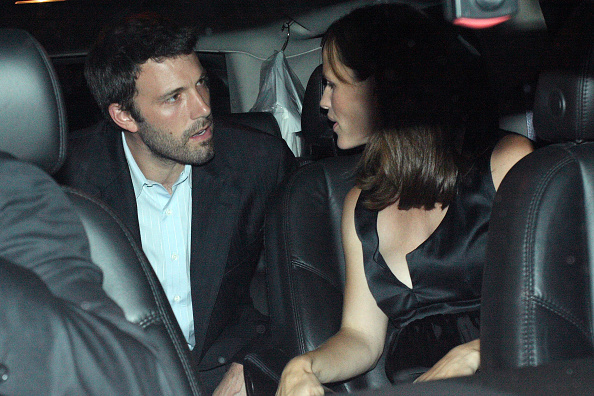 The thing about the public life of Ben Affleck is that most of what we know about it is gleaned from paparazzi photos and statements massaged and released by publicists. If Ben Affleck is trying to balance seven packages and two cups of Dunkin Donuts coffee while returning home, we make certain assumptions. If we see him smoking a butt out on the terrace while J.Lo is doing yoga, we make assumptions about that, too.

“The truth was, we took our time, we made a decision, we grew apart,” Affleck said. “We had a marriage that did not work. This happens. It is somebody I love and respect, but to whom I should not be married any longer.”

Affleck also admitted a few years ago that he started drinking heavily when his marriage began unraveling, and he told Stern that he “would probably still be drinking” if he and Garner were married. “That was part of why I started drinking alcohol — I was trapped. I was like, ‘I can’t leave because of my kids, but I am not happy. What do I do?’ What I did was drink a bottle of scotch on the couch, which turned out not to be the solution.”

But, he added, “You know what? We tried. We tried, because we had kids,” but he thought he and Garner “would have ended up at each other’s throats” if they stayed together. “Both of us felt like, We don’t want this to be the model that our kids see of marriage.”

Nevertheless, they ended their marriage amicably and with mutual respect. “Did we have moments of tension? Did we have disagreements over the custody? Was stuff difficult for us? Did we get angry? Yes. But fundamentally it was always underpinned with respect. I knew she was a good mom. I hope that she knew that I was a good dad. I was. I had to get sober —- I knew that too — and I acknowledged that. I said, ‘You’re right. I’ve got to quit drinking.’”

Affleck also admitted that he was also wary of reuniting with current girlfriend, Jennifer Lopez, mostly out of fear it would disrupt the lives of his children. “My responsibility to my children is the highest responsibility. I don’t want to do anything that is painful or destructive to them if I can help it. … My life affects them. Me and their mom are celebrities. That is hard. That is a cross to bear.”

That’s that, I suppose, and I won’t speculate any further because that’s how pop-culture writers get themselves in trouble, except to say that this all seemed fairly inevitable to me after Kevin Smith said that he and Affleck had a falling out after Affleck married Garner. Also, drinking a whole bottle of scotch on a couch in a house you share with your three kids is probably not a great idea, either, no matter how trapped one feels. There’s little more traumatizing to young kids than drunk Daddy.

And that’s all I got to say about that.

Source: The Howard Stern Show via US