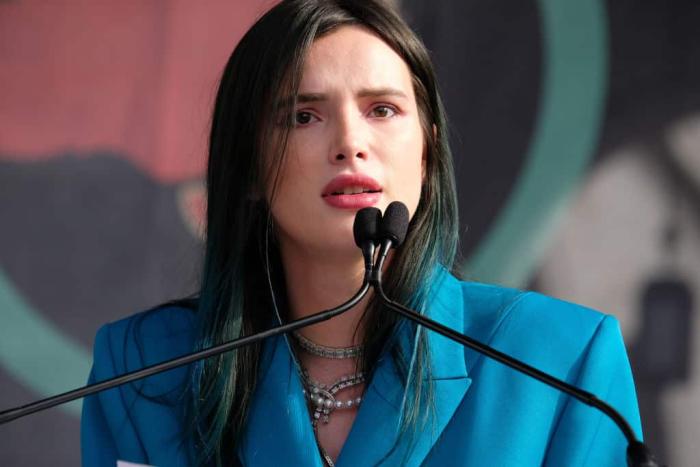 In the space of less than a fortnight, Bella Thorne’s OnlyFans journey has become a deeply controversial and divisive development in her career. The actress joined the subscription-based site and quickly became the first person to earn $1 million in the first 24 hours on the platform. She earned $2 million in less than a week. OnlyFans is best-known as a site used by the sex worker community as a safer means to conduct business, especially given how inhospitable most other major subscription or patronage sites are to such individuals. While Thorne told fans over Twitter that her page would not include nudes, she became embroiled in backlash anyway, with many sex workers candidly discussing how her presence on the site could hurt them in the long-term. Claiming that her account was a means of research for a film she was making with The Florida Project director Sean Baker, sex workers accused Thorne of playing dress-up in their community and not fully understanding their long-term issues or struggles.

Things took a darker turn when Thorne allegedly promised nude photos for $200 to users but did not provide them, leading to a barrage of chargebacks and refund demands from subscribers. As reported by Out, Throne reportedly ‘began teasing to followers via private messages that she was selling a nude photo for $200. OnlyFans allows users to sell locked photos on an ad hoc basis, essentially up-charging fans for the most premium content.’ Since the image in question wasn’t what was allegedly promised, subscribers wanted their $200 back, and in the hours that followed, OnlyFans instigated new guidelines that limited the amount creators can charge fans moving forward, presumably to avoid repeat incidents like this. As Out explains, ‘The new changes have changed the pay-out to a 30 day process, the max upcharge to $50 per post, and have maxed out tipping at $100.’

OnlyFans users were understandably upset. Sex work is already heavily stigmatized and difficult to conduct online given the restrictive legislation of FOSTA-SESTA, and OnlyFans is a rare porn-friendly site where they can get paid without having charges blocked by companies like PayPal. So, Thorne entering the scene to ‘do research’, making millions off her presence, then screwing around in such a public manner that the consequences end up impacting potentially thousands of people is, to put it mildly, kind of sh*tty.

Thorne tweeted out an apology that left many with more questions than answers:

PT1 Remove the stigma behind sex, sex work, and the negativity that surrounds the word SEX itself by bringing a mainstream face to it that’s what I was trying to do, to help bring more faces to the site to create more revenue for content creators on the site.

…I am a mainstream face and when you have a voice, a platform, you try to use you in helping others and advocate for something bigger than yourself. Again in this process I hurt you and for that I’m truly sorry.

Ps. I’m meeting with only fans about the new restrictions to find out why!!! This is fucked up and I’m sorry comment any ideas or concerns you want brought up to OF!! and send me your links and a pic so I can promote you guys

Many sex workers were not won over by this explanation. It seems self-aggrandizing, at best, for Thorne to assume that the best way for her to help destigmatize sex work was to join OnlyFans, make a seven-figure sum from it, then pretend that her little experiment was somehow comparable to actual sex work. A mainstream, non-sex worker presence on OnlyFans doesn’t highlight their plight: It simply draws attention away from it and gives a more ‘presentable’ sheen to the platform. If she wanted to help, then why was her way of doing so seemingly designed to make her money and not those she says she wants to support? Where’s the allyship there? If sex work does indeed need a ‘mainstream face’ then surely it would be a face of someone who is or was, you know, a sex worker? Think of women like Janet Mock, for instance. Given how many sex workers are women of color and queer or trans women, maybe the most beneficial proto leader for the movement would be someone who reflects that, and not a former Disney Channel star with a reputation for shock tactics?

A great way for her to use her allyship responsibly would have been to follow in the footsteps of FKA Twigs, who launched a GoFundMe to aid sex workers who have been hit hard by COVID-19. Twigs herself credits her time working in a gentleman’s club with informing ‘the strong and formidable woman that I am today, but also a lot of my work as a music and visual artist — sometimes even subconsciously.’

I can’t speak for sex workers, but I personally don’t buy that her intentions were wholly altruistic here. Not when there’s $2 million on the line for a woman who hardly has to worry about how she’s going to pay her bills. There doesn’t seem to be much evidence that ‘mainstream voices’ on sites like OnlyFans leads to trickle-down benefits for everyone else. Indeed, if the site becomes more popular with people like Thorne then what’s to stop OnlyFans from embracing that more than the base that made them who they are? That doesn’t even bring into consideration the perils of insidious legal entanglements that already put sites like OnlyFans in precarious positions.

This story took a weirder turn when Sean Baker, the man with whom Thorne was supposed to be making a movie, interjected with his own statement. It turns out that he’s not making any movie with Throne, and that he claims he warned her against hurting sex workers with her ‘research.’

So, assuming that Baker is telling the truth, Thorne either seriously jumped the gun and assumed their collaboration was ready to go or she’s using the prestigious sheen of Baker’s film-maker clout as an excuse for some seriously exploitative nonsense. Neither option makes her look great, does it?

Thorne said she would promote sex workers on her social media but hasn’t posted since her apology.