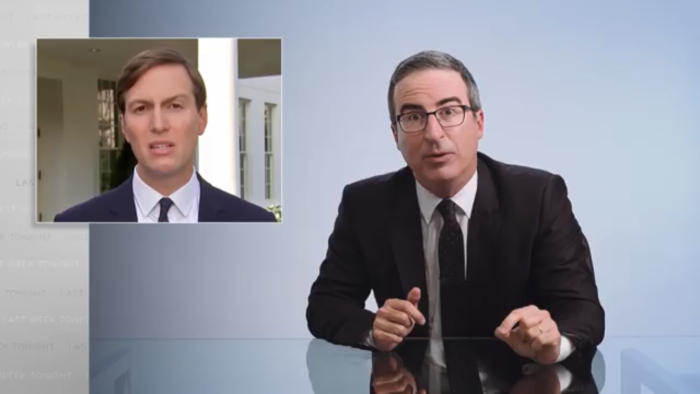 We’ve all told Jared Kushner to get f***ed at one point or another. However, we don’t all have a show on HBO Max, so our screams of frustration often go unheard. That is not the case for John Oliver. He said what we all yell at our phones and TVs on a regular basis on the newest episode of his show Last Week Tonight.

The shooting of unarmed Wisconsin man Jacob Blake by police gave way to protests all across the country this past week. In particular, professional sports games were postponed as players in the NBA, WNBA, NHL and MLB refused to play out of respect for much bigger issues facing our nation. Jared Kushner responded to the NBA postponement in the most tone deaf way possible.

While he was a guest on CNBC, Kushner said “I think that the NBA players are very fortunate that they have the financial position where they’re able to take a night off from work without having to have the consequences to themselves financially, so they have that luxury which is great.”

If that quote is infuriating to you, then you and John Oliver have something in common. “First, get f***ed, Jared,” said Oliver in response to Kushner. He continued by pointing out, “They are not taking a night off from work. The emotional toll of being Black in America, combined with the pressure to perform at an elite level during a global pandemic, is, I’m guessing, pretty taxing. So by not playing, they’re not exactly taking a spa day.”

Well said, John. You can watch the whole segment below and then, if you like, scream into your own house/apartment/car/mind for Kushner to get f***ed as much as you like. I’ll start.


← Brad Pitt's New Girlfriend, Nicole Poturalski, Is in an Open Marriage with Roland Mary | Bella Thorne Apologizes to OnlyFans Users But Many Feel The Damage Has Already Been Done →