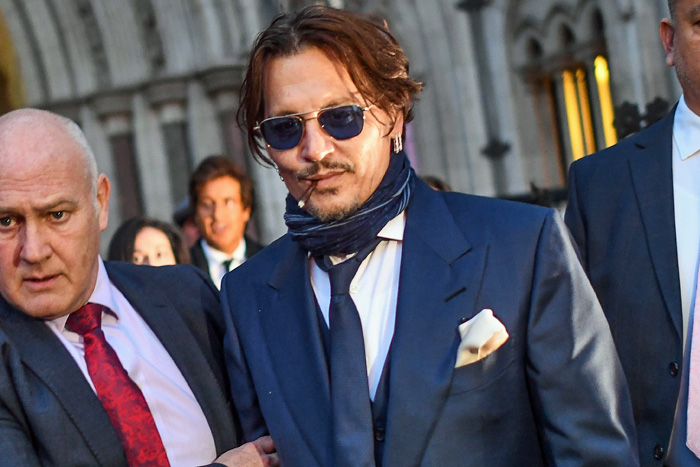 When we last checked in on Johnny Depp’s lawsuit against The Sun, the court was being shown texts between Depp and Paul Bettany — yes, that Paul Bettany — where the Jack Sparrow actor expressed his desire to drown Amber Heard, burn her, and then rape her corpse to make sure she’s dead. You know, the usual urges of a kind, gentle soul who’s just a “loving, extremely caring guy” in the words Winona Ryder generously provided the court, but not to call anyone a liar! Let’s not get carried away. She just wants everyone to know that when she dated Johnny almost 30 years ago, he was very sweet, so it’s “impossible to believe that such horrific allegations are true.”

Thanks, Winona. You too, Penelope Cruz and Javier Bardem, who also provided statements declaring how wonderful of a friend Johnny is to them, so it’s crazy to think that he’d only beat his wife in private without witnesses. What are the chances?

Anyway, once again, Depp’s text messages came back to bite him in the ass, which happens when you leave a long electronic trail detailing your daily booze and pill benders. This time around, Depp’s own words blew holes in the viral story that Heard sliced the top of his finger off while assaulting him, which first made #JusticeForJohnnyDepp a trending topic after a photo of Depp’s severed finger conveniently found its way online.

Johnny Depp texted his doctor asking what to do when he severed his finger during an alleged attack on Amber Heard, ripping off her nightgown, grabbing her breasts and strangling her, a London court has heard.

Depp had claimed in US court papers that his ex-wife Heard had chopped off the top of his right middle finger by throwing a bottle of vodka at him during a violent altercation just a month after they were married.

But two texts Depp wrote to his personal doctor, David Kipper, in 2015 were read out in London’s High Court on Wednesday, in which Depp admits he inflicted the grisly injury himself.

Whoops! If only one of Depp’s lawyers had warned him that vindictive court battles would do nothing but blow up in his face as Heard’s lawyers show up with mountains of receipts. Except, oh wait, one of his lawyers did advise against doing exactly that, and guess who didn’t listen. Now the courts and the public get to hear Heard’s side of the story, which had been locked down by the divorce settlement.

To the surprise of no one, it is some shit.

“That night, Johnny shoved me into a ping pong table that collapsed underneath me. Johnny threw bottles through the window panels of a glass door, breaking two panes, and leaving glass everywhere. Johnny then grabbed me, gripping my body and nightgown. He tore the nightgown off, and at some point, I was naked and barefoot, covered in alcohol and glass.

“Johnny grabbed me by my hair and choked me against the refrigerator in the kitchen. I tried to stand myself up but I was sliding around the glass-strewn floor and countertop. Johnny threw me away from him, and I tried to run away as Johnny continued to throw objects and alcohol at me

“In one of the most horrific and scariest moments of this three-day ordeal, Johnny grabbed me by the neck and collarbone and slammed me against the countertop. I struggled to stand up as he strangled me, but my arms and feet kept slipping and sliding on to the spilled alcohol and were dragged against the broken glass on the countertop and floor, which repeatedly slashed my feet and arms.

“Scared for my life, I told Johnny, ‘You are hurting me and cutting me.’ Johnny ignored me, continuing to hit me with the back of one closed hand, and slamming a hard plastic phone against a wall with his other until it was smashed into smithereens. While he was smashing the phone, Johnny severely injured his finger, cutting off the tip of it. … Once I was able to get away, I barricaded myself in an upstairs bedroom.

“On the third day of Johnny staying awake without sleeping, I came downstairs to find numerous messages Johnny had written to me around the house, on the walls and on my clothes, written in a combination of oil paint and the blood from his broken and severed finger. Johnny also urinated all over the house.” He was finally hospitalized.

For the record, Depp’s lawyer Adam Waldman obviously disputes Heard’s story, specifically the dates provided, and when reached for comment, Waldman told Page Six that her team is “so lost in their lies, they can’t even get their fake sequence of events, times or dates straight.” As for Heard’s team, they basically said “bring it.”

“Amber Heard is very eager for the U.K. trial to proceed. In the lead-up to trial, Mr. Depp and his team have engaged in a daily press campaign to selectively leak materials, spin them in every way possible, and embarrass and harass Amber and the people around her, including potential witnesses. Ms. Heard believes that the truth coming to light through the presentation of evidence in court will finally put an end to this abusive campaign.”

Considering Johnny Depp drunkenly texts anyone and everyone when he’s thinking about arsoning his wife then diddling the ashes, I’d feel pretty confident about seeing his ass in court, too. On that note, in case it was too subtle, I was being sarcastic to Winona Ryder and Penelope Cruz earlier. They suck. Suck real bad.

← Look for the Helpers, Because They Are Everywhere Right Now | There Was No Good Reason for Brandon Routh's Departure From 'Legends of Tomorrow' →