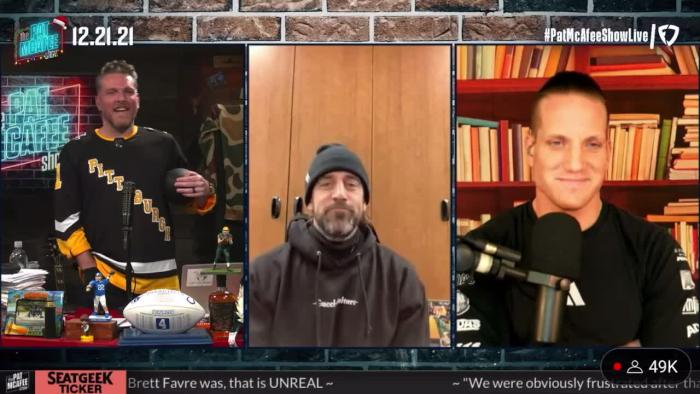 If you enjoy watching football, never try to learn any personal details about your favorite players. Quarterbacks are often the worst. The number of QBs who are not vaccinated or who are vaccine-hesitant is ridiculous: Kirk Cousins, Sam Darnold, Cam Newton, LaMar Jackson, Joe Flacco, and Carson Wentz, among others. Josh Allen won’t say (and because I became a little enamored with Allen, I did some research on him recently, and whoa boy! His vaccine status is the least of his issues).

Retired QBs like Peyton Manning (Republican, sexual harassment issues in college) and Drew Brees (homophobia) have their issues, too. Plus, Tom Brady. Let’s not even get into it.

Aaron Rodgers, however, used to be the one NFL QB you could sort of depend on to be sane. He went to Berkeley, he appeared to be level-headed in podcast interviews, he dated Olivia Munn and Danica Patrick (for whatever that is worth), and he was even chosen to guest host Jeopardy, and he actually wanted the gig permanently. Up until a few months ago, the worst I ever heard about Rodgers is that he had a minor fascination with UFOs.

But then he started dating Shailene Woodley, which seemed fine. Sure, she’s super woo-woo, but whatever! Only then, Rodgers lied about his vaccine status, and given the crowd that he and Shailene Woodley hung with (Miles Teller), it felt like Rodgers may have gone off the deep end. All of a sudden, Rodgers is admitting to ingesting horse-paste for COVID and taking advice from Joe goddamn Rogan, which doesn’t even jibe with anything I would have associated with Woodley. Rodgers also started getting paranoid about his coaches leaking his vaccine status (not an unreasonable paranoia given his relationship with the Packers this last year), and started railing against the “woke mob” and saying that he’s canceled.

Canceled? The guy makes $33 million a year and leads a team that was the first to clinch a playoff berth this season. If that’s canceled, the rest of us should be so lucky.

Somehow, however, Aaron Rodgers managed to stoop even lower, wearing a Barstool Sports’ cancel culture hoodie on the Pat McAfee Show yesterday that he personally received from Barstool founder Dave Portnoy, which Rodgers gloated about. Dave Portnoy! This guy.

Can confirm @AaronRodgers12 is still fully on #TeamPortnoy @stoolpresidente pic.twitter.com/NzJxcKmE1m

At least we still have Patrick Mahomes.