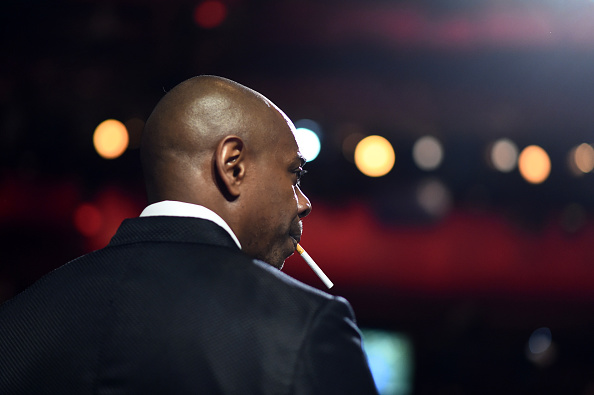 Earlier this month, in the wake of the controversy incurred by Dave Chappelle’s transphobic jokes in his Netflix special, Closer, Chappelle’s high school alma mater, Duke Ellington (in Northwest D.C.), decided to postpone the dedication of a new theater in the school named after Chappelle. The school decided to delay the renaming until April so that they could address questions and concerns from students and the community (at this moment, the school still plans to name the theater after Chappelle; the objective, according to the school, is not to change minds).

Nevertheless, Chappelle still made a surprise appearance at the school on the originally assigned November date earlier this week. For the most part, it did not go well, according to Politico. Chappelle took shots at the kids and made jokes at their expense, so much so that neither the students nor parents allowed their names to be used in the Politico piece for fear of backlash. When one student called him a “bigot” and said, “I’m 16 and I think you’re childish, you handled it like a child,” Chappelle responded defensively. “My friend, with all due respect, I don’t believe you could make one of the decisions I have to make on a given day.”

In response to another critical question, Chappelle told the student body of nearly 600, “I’m better than every instrumentalist, artist, no matter what art you do in this school, right now, I’m better than all of you. I’m sure that will change. I’m sure you’ll be household names soon.” Later, when a student told Chappelle that his “comedy kills,” Chappelle replied, “N——— are killed every day,” to the dismay of at least one parent, who didn’t appreciate the use of the N-word in front of students. At another point, he singled out a student who left before the event was over, saying, “Of course she left early.”

Chappelle’s spokesperson dismissed issues raised by students, saying that “They are complaining that he talked and said the n-word. If anything, Dave is putting the school on the map.” The spokesperson also complained that students who supported Chappelle were not allowed to speak at the event and that the kids “deserved an F for forgiveness.”

It wasn’t all bad, however. Chappelle did decry the death threats some students have received for criticizing Chappelle. “This is my family and whether they know it or not I love these kids,” he said. “I don’t want to hear about any threats to these kids. These kids don’t deserve that.”

“He was really kind,” a student said, according to Politico. “If [only] he [had] acted that way the whole time. … There was no reason to be mean to us. He was just laughing at kids.”

What’s remarkable, but unfortunately not surprising, is that Chappelle got a lot of support on social media for lashing out at kids. “Dave Chappelle remains undefeated. Imagine being a teenager trying to dunk on the king of comedy and thinking it will go well,” one user on Twitter said. Others, however, saw the behavior for what it was. “dave chappelle is a rockstar comedian beloved worldwide and admired by a-listers and presidents and this is the most loser shit i’ve ever seen in my life,” another user tweeted, while another joked, “sure glad Dave Chappelle can defend himself from being cancelled by the all-powerful (checks notes) high school student cabal.”


← All 3 Killers of Ahmaud Arbery Found Guilty of Felony Murder | Trailer Watch: The Team Behind 'Lost' Gives Us 'From' with Harold Perrineau →