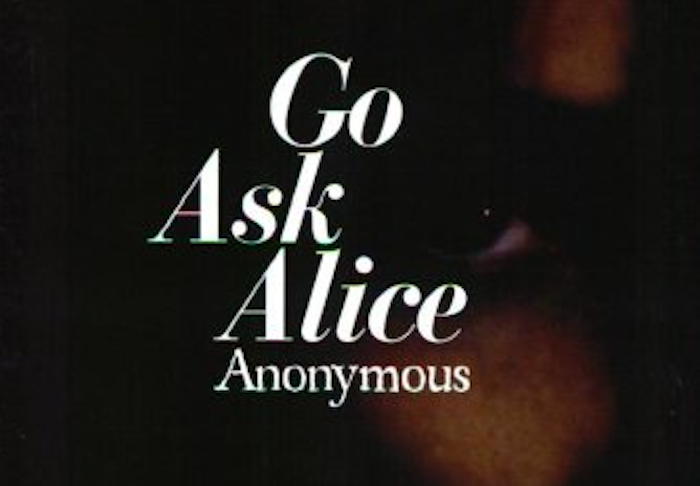 Oh, friends, this…this is a special book, but not for the reasons the author probably wanted. Go Ask Alice was supposedly the diary of an anonymous teen girl who drank some Coke laced with LSD and became a drug addict almost immediately. What ensues is nothing short of ridiculous bananas fiction that is desperately trying to masquerade as hard-hitting stuff to keep children away from drugs and on the straight and narrow—so, of course, the diary ends with our heroine dying. In fact, the “epilogue” is so overwrought and ridiculous that I need to post it here for good measure. 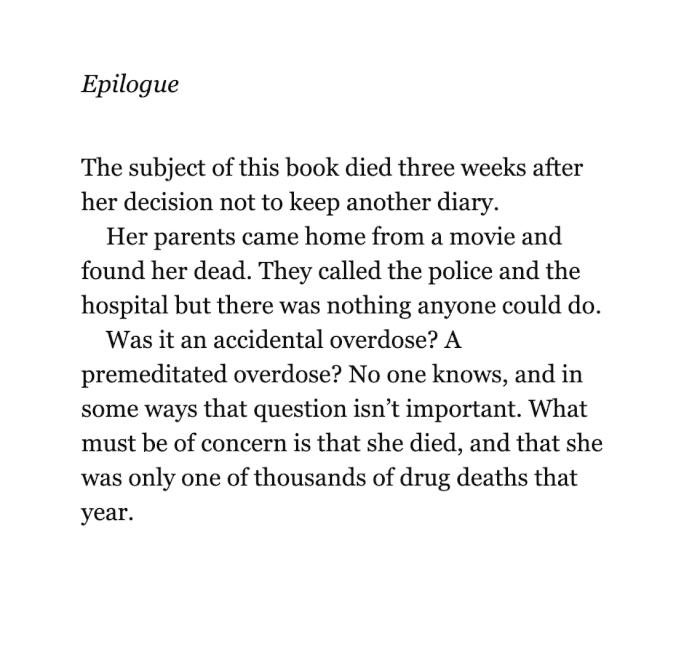 Now, a note before we dive into this: Addiction is a serious medical issue and one that some of my loved ones have struggled with, and I know I’m not alone in that. There is nothing funny or amusing about it. It tears families apart and has devastating consequences for everyone who gets caught in its crosshairs. I find nothing amusing about it. This book, however, is unintentionally hilarious, and I want to make the distinction clear before we move forward.

I’m not sure when I first encountered Go Ask Alice but it must have been between the ages of 10 and 12 (so, between The Baby-Sitters Club and Valley of the Dolls basically) and I remember thinking that this was such grown-up stuff to read (as a kid), and then having the realization that 15 (the age of the unnamed protagonist/diarist at the start of the book) wasn’t so far off, and how did things get so bad for her? Then I was really confused how she could just up and run away on a bus, because I grew up on a mountain in Anchorage Alaska, and there really wasn’t any way to get out of town for teenagers then (or now, probably.) I was a naïve kid, but even back then, by the end of the book, I had my suspicions that Go Ask Alice wasn’t a real diary found and meticulously put together from real diaries and scraps of paper (when she runs away and lives on the road with the hippies, she has time to write things down on “single sheets of paper, paper bags, etc.” OK.) Upon rereading as an adult, it was so clearly obvious that this book was written not only by an adult, but an adult who neither knew any teenagers, nor met anyone who suffered from addiction, and basically tried to scare the youths straight with a tale of teenage horror that the end result is honestly pretty funny. Yes, the “Anonymous” author of Go Ask Alice was, in fact, a 50-something Mormon youth counselor named Beatrice Sparks, who would later go on to write Jay’s Journal (about teenage Satanism that ultimately ends with his death) and It Happened to Nancy (about teenagers and HIV that ultimately ends with a teenager’s death.) Obviously, all of these books end with the teenager dying, because if I know anything, it’s that teenagers have an acute sense of their own mortality and anonymous diaries are the best way to get through to them to inform them of the dangers of anything. That’s why after this, I’m going to go write Don’t Eat the Tide Pods, Tony. Important stuff.

So what is Go Ask Alice about? Oh, friends, buckle up. It’s a car crash of a book.

Our young, unnamed protagonist feels like she doesn’t fit in and has a crush on some dude at her school. The first couple pages are basically about how she’s dieting (with her mother’s support…uh, OK?!) and then in an exciting twist, she’s told that the family is going to move to a new state. Hooray!

She moves to the new state (I think it’s Colorado? I mean, the point is her new location is Anytown, USA. It could be where you live, reader. This happens everywhere, dun, dun, dun.) The new state is basically like her old state, but she makes a friend and everything is OK. That is, until, she goes back to her old town to spend the summer with her grandparents, and unwittingly is given a glass of Coke laced with LSD and trips, and LOVES it.

Side note: I have never, in my 34 years on this planet, encountered someone who wasted drugs on people who didn’t want them. Like, ever. And, friends? I used to work in a bar back in the day. Growing up we were warned about Halloween candy laced with LSD, and now, I occasionally read about the growing threat of cannabis-infused candy getting into the hands of children. That s*it isn’t cheap. You wouldn’t just drop LSD in Cokes as a fun, kicky science experiment because that is a waste of the drugs you bought, and again, s*it is expensive. However, to our author, it is a good scare tactic to keep the youths on their toes, so in the book it goes!

The next 170-ish pages are a wild ride, which demonstrates our “author’s” descent into the throes of addiction.

She loves her first LSD trip so much, she does it again and ends up losing her virginity while on a trip. Drugs make you fast and loose, see? Then, her grandfather has a heart attack, so she steals her grandparents’ sleeping pills to cope. Eventually, she returns home from her summer of sin, and the drug use doesn’t stop. She gets her own prescription for sleeping pills and eventually begins selling drugs her college boyfriend supplies to her and her edgy friend Chris to fund her own habit. Her parents, of course, have no clue any of this is going on. Are you picking up the author’s message loud and clear? Teenage girls are addicted to drugs and their parents don’t have a clue. Everybody panic!

So our author and Chris are dating college boys who are friends, and also drug dealers. One night, she and Chris walk in on their boyfriends in flagrante (I hate it when that happens) and they realize that they were being used by them. So they do the only thing you should do in that situation. Report them as drug dealers to the police, and run away to San Francisco to escape retaliation, of course!

Once in San Francisco, Chris befriends Shelia, who owns a hip boutique and is in the habit of hiring 15-year old girls to work in it because child labor laws aren’t a thing that exist. As a result of working for Shelia, Chris and our author get invited to Shelia’s parties at night, where of course drugs are being used. Shelia’s boyfriend gives the teenagers heroin, and then rapes them, because everything is awful and you need to know that before you too drink LSD-laced Cokes at a party.

Chris and the author decide “f*ck this” and move over to Berkeley where they lease space and open a jewelry shop because again, 15-year-olds with no credit are absolutely given leases to commercial spaces all the time. The girls get homesick, so they decide to come home to their families to enjoy Christmas with them. I guess they just up and leave their shop, and now their credit is ruined along with their lives. That said, that’s probably why 15-year-olds aren’t allowed to lease commercial real estate. You can thank Go Ask Alice, teenagers.

The family time doesn’t last long, and after the author and Chris get caught in a police drug raid, she skips town again and hitchhikes around California. On the road, she meets a girl named Doris, who is a “BP” (an author’s footnote helpfully points out that means Baby Prostitute, because everything about this book is supposed to show the horrors of drug use.) So, if you see where this is headed, congratulations.

Yup, our author becomes a prostitute herself. Keep in mind, this is all being recorded, by her, on scraps of paper, because of course, she’s still keeping her diary.

Anyway, she encounters a priest, decides to stop using and go back to her family, because she’s sick of drugs. Concurrently, she starts to date a college kid, and her parents are OK with that (!?!) I don’t know anymore. They lost me back in San Francisco, tbh.

She gets released from the hospital and is optimistic for the future. She decides to stop keeping a diary, because the diary is what was wrong with her life for the past year and a half or so, not everything else. Then, bam! The epilogue. She died. Drugs kill. The end.

This … wow. It was a lot. I can’t believe I ever fell for this as a kid. It’s so clear the real author read about the horrors of teenage drug use in the newspaper one day and decided to write a situation where the worst things imaginable happen to one, young, once-innocent teenage girl as a way to scare kids straight. The end result, rather than an even mildly effective way to demonstrate what could possibly happen if you start down that path, is just a trashy, campy, pulpy mess that is high on the “oh, you tried, didn’t you” factor. It’s the literary equivalent of a disco ice dancing routine to warn you of the dangers of bear attacks. This book tried to be a humorless warning, and in the end, is a truly unintentionally funny book, whose trashy factor is only exceeded by V.C. Andrews. Probably not what the author was aiming for.

I was a gullible 10-year old, apparently. By the time I was 15, I would have truly enjoyed reading this for the camp entertainment it is, and no doubt would have staged dramatic readings for my friends because I was a dork and that’s how 15-year-olds were back in my day. I suspect they’re still closer to what we were than what our author was in the book.

I just hope that the perils of teen drug use is handled more nuanced now than it was back in the day because Go Ask Alice does nothing in that regard. Although it does make me want to track down Jay’s Story, because I definitely want to know how Sparks tackles that oh-so-common problem of teenage Satanists. Note to self, next band should be: I was a Teenage Satanist.

To keep with this theme of YA books boning up teen drug use, next week we’re going to visit a very special Sweet Valley High. Oh yes, you know the one. Sweet Valley High #40: On the Edge. Until then, friends.

← Reddit Asks: What Movie F*cked You Up Mentally? | What's Irina Shayk Saying by Not Saying Anything About Bradley Cooper (and Lady Gaga)? →