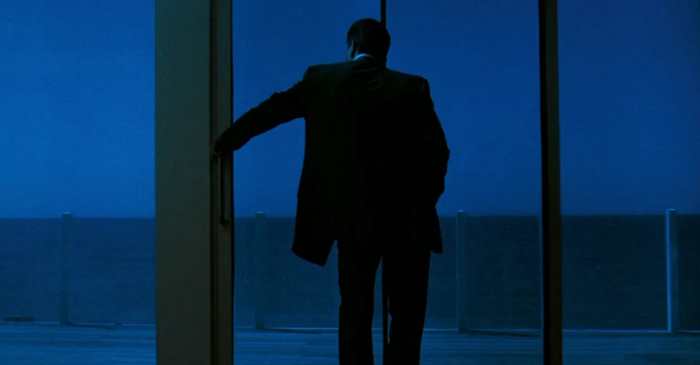 Blake Howard’s incredible podcast, One Heat Minute—in which he dedicates an episode each to analysing one minute of Michael Mann’s Heat—is, aside from the Always Sunny boys, the only podcast I’ve ever been able to listen to. An early episode of One Heat Minute covers Robert De Niro’s entrance at the start of the film. For twenty or so minutes Blake and his guest track the minute in which we meet Neil McCauley, the character melting out of the pre-dawn light of an otherwordly LA in the film’s opening credits, accompanied by Elliot Goldenthal’s emotive soundtrack, and transitioning into the sequence in which he floats through the hospital from which he is going to steal the ambulance that he and his crew will use to pull off the armored car/bearer bonds heist later in the movie. It’s one my favorite film openings of all time—fitting, I suppose, for what is my favourite film of all time (alongside the Before Trilogy, of course)—and the depth to which Blake and his guest go in analysing the perfect way McCauley’s opening moments are pitched in order to communicate so much about him and the cool and efficient professionalism which defines him above all else is a joy to listen to.

It was also the first answer that immediately popped to my head in response to this Twitter prompt:

What is the best character introduction you've ever seen in a movie? pic.twitter.com/GIfplcWyGZ

There’s not many things in this world better than a good character intro, as Twitter’s other examples in response show:

The Fata morgana in the scene in the film Lawrence of Arabia at the well is one of the most beautiful moments in a film I have seen. Like looking into the heart of the film itself: a mirage the silence and the endless desert. What a matchless entrance by actor Omar Sharif. pic.twitter.com/JymJBBBLIP

V. In V for vendetta. pic.twitter.com/DKL2OBqx6v

There's only one. Talked about for the whole film but only in it for 5 minutes.
Harry Lime. https://t.co/dwCe3VHyef

The original 1977 version of course pic.twitter.com/HGR5B3ZLhI

M (1931). It is the definitive serial killer film. Monumental performance by Peter Lorre. Fritz Lang is a giant. pic.twitter.com/ItfKpCT2YJ

Danny McBride in This Is the End, without any hesitationhttps://t.co/f1luQxYSKX

My thumb was getting sore from hitting the like button. So many good replies here.
I’ll add, Martin Sheens Apocalypse Now intro. pic.twitter.com/3nmkPkZcYY

the way the opening scene of Cleo from 5 to 7 (1962) introduces the titular character by having a card reading that goes into the formative experiences in her past, her present anxieties, and her doomed future in a way that establishes all you need to know for her and the film. pic.twitter.com/lYedm81u14

The barrage of character introductions that is the opening scene of shaun of the dead pic.twitter.com/aDRNFlQXvL

It starts the night before, when we see how sick with dread all our main characters are at the prospect of seeing him. Then Ben Kingsley's uptight march through the airport kicks off a legendary performance.

Sir Anthony Hopkins as Dr. Hannibal Lecter in "The Silence of the lambs".(Director: Jonathan Demme) pic.twitter.com/oF6ZIy0r7s

I've always loved this one. pic.twitter.com/bt4y39TGZh

One of my top three pic.twitter.com/wPMENyOY0p

Jackie Brown definitely deserves to be on this list. Her long intro walking through the airport says so much about her. pic.twitter.com/xI0jngsO08

The rather low key appearance of Tim Curry pic.twitter.com/1Aa9MTbXhQ

Vito Corleone in "The Godfather". We get his character just from the opening scene and his dialogue. pic.twitter.com/NDuexbPWwf

In BLACK ORPHEUS, Eurydice getting spit out then swept up, literally at one point on a trolley, in the middle of Carnival is one of my favorite character intros. pic.twitter.com/oBBLb44daw

Indiana Jones and the Raiders of the Lost Ark (1981) pic.twitter.com/XpSaoQvH3P

I agree with this tweethttps://t.co/FuApdOd27v