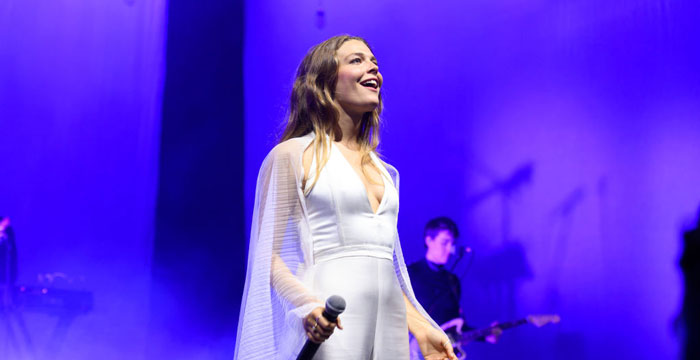 Maggie Rogers has taken to Twitter to respond to sexually harassing hecklers who interrupted her concert over the weekend.

The American singer-songwriter, who was discovered by Pharrell, is currently touring the U.S. to promote her debut album Heard It In A Past Life. It was at one of these performances at Austin City Limits Live at the Moody Theater in Austin, Texas that two men in the audience heckled her by commenting on her looks and demanding she “take (her) top off.” Rogers does not detail what happened next at the show. But through a Twitter note, she does speak to how this experience felt and how she hopes to move forward.

“take your top off” pic.twitter.com/pqTmWlYIQ6

Here’s her statement in full, recreated exactly as written:

every night before the alaska acoustic encore, i speak about gratitude and growth and change. it’s the most vulnerable part of the set. just me and a guitar before i say goodnight.

last night, in the middle of this speech a man yelled, “take your top off.” another joined in and yelled “you cute though”.

i was stunned. furious. fuming. confused. and also - on a really basic level - it really hurt my feelings.

i step on stage every night with a deep reverence for the stage, my craft, and the privilege that is making music for my job. i’ve been writing and producing music for 10 years - my body is my greatest tool in communicating that work.

i want to use this moment to be very very clear. there is no space for harassment or disrespect or degradation of any kind at my show.

be kind to each other out there.

Here’s her “Alaska,” her breakthrough song she was preparing to play before reckless bros snatched at her spotlight.

Fall into a Rogers’ music rabbit hole at her Youtube channel.