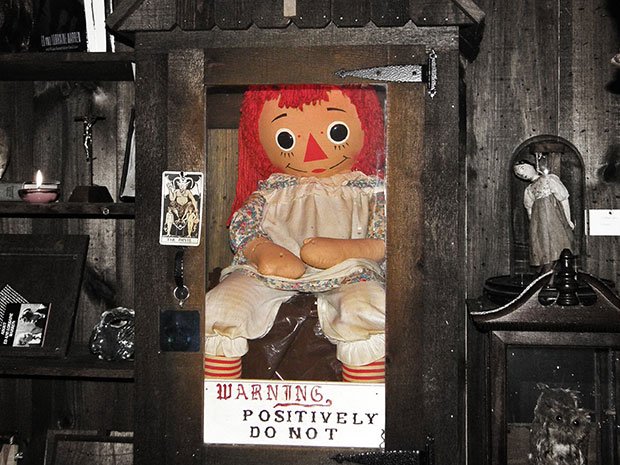 Did The Infamous Annabelle Doll Escape From Its Prison Inside The Warren's Home Museum?

Of all of the paranormal cases supposedly conquered by Ed and Lorraine Warren, their struggles with Annabelle the doll may be the most famous. This is, of course, due to James Wan bringing the Warrens and their dubious adventures (that I cannot get enough of, honestly) to the big screen in The Conjuring movies and then Annabelle’s own spinoff flicks. The movie version of the possessed doll is so terrifyingly beloved by audiences that Wan even popped her into an underwater scene of 2018’s Aquaman.

The real Annabelle, unbeknownst to most people, is actually a Raggedy Ann doll and not a nightmarish porcelain-faced abomination as portrayed in the movies. Honestly, Raggedy Ann and her dead, unclosed eyes are more horrifying to me, especially when you add in the alleged abilities of the doll. Seeing Movie Annabelle blamed for writing things and reappearing: sure. Thinking about Raggedy Annabelle writing notes and moving on its own, slumping over and sliding across the floor like a possessed inchworm? GOD NO.

For some reason, reports surfaced today concerning whispers about Raggedy Annabelle escaping her confines in the Warren Occult Museum in Connecticut.


The cursed Annabelle doll, the inspiration behind ‘The Conjuring’ and ‘Annabelle’ franchise, has been trending after rumors of her escaping from the Warren museum where she is housed started circulating. pic.twitter.com/nZpPPgjXkt

I have questions for this tweet. What reports? Where? Can I see them? The answer is Chinese mistranslation of an interview with Annabelle star Annabelle Wallis concerning her method for getting Tom Cruise to run with her during the filming of The Mummy. This does not make any more sense than a demon doll escaping a Jesus-infused glass case, but that’s the impetus for Twitter to freak out.

Did Annabelle the doll escape or did the demon in annabelle escape? 🙃 pic.twitter.com/7ir6sUEDQN

the warrens both already passed away and they were the ones keeping annabelle in their museum… so it would make sense for her to escape if no one is able to contain her.. y’all we’re fcked

NOT DEMI BEING THE ONE WHO LET ANNABELLE ESCAPE pic.twitter.com/gV1xK6m39B

me and my friends after we heard Annabelle Escape pic.twitter.com/sVcFxA7EC5

Well even if she did escape she can't come to me.. Right? pic.twitter.com/o23BcrCLPr

Annabelle on her way to McDonald’s after escaping warren museum #Annabelle pic.twitter.com/xGBCAp7CRG

I think Annabelle escaping would have been a nice change of pace for 2020. At least we know how to stop her.

← How Can We Ensure Our Vote Will Count in November? | Review: 'Endless' is a Movie of False Notes →