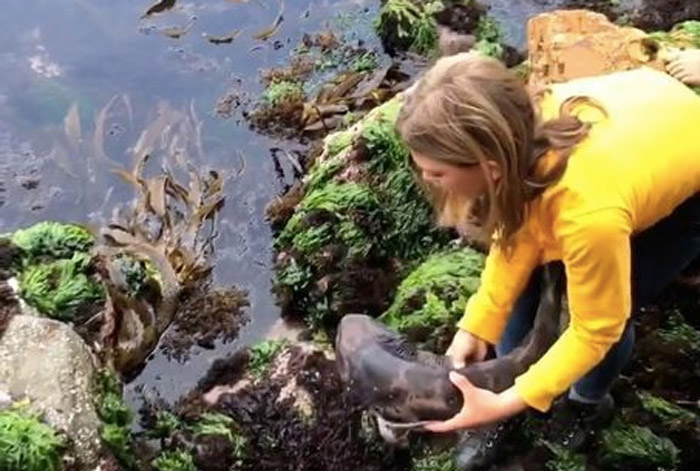 Yesterday, we shared the exciting story of a retiree who rescued his dear doggo from the jaws of a hungry gator. Today, the tables are turned as an 11-year-old girl rescued a shark that’d lost its way.

Last week, young Billie Rea was walking along the tide pools on the edge of Kingston Beach, Tasmania, when she spotted a shark trapped among the rocks. We’re not talking a massive maneater, but the lesser-known draughtboard shark, which is a bottom-dweller that eats shellfish and grows to about three feet long. Rea recognized it right away, calling out to her mother, “I’ve got a draughtboard shark.” The poor thing was trapped between two rocks, having become stuck by low tide. To the trapped critter, the girl said, “Come on, darling,” as she hoisted it up to carry it back to the ocean.

The shark thrashed in her arms as she lifted it from the tide pool, but all the while Rhea cooed, “It’s alright. It’s alright.” As her mother, Abby Gilbert, filmed her, she carefully trekked across slippery rocks to a point in the pool where the shark could easily swim away. And that’s just what it did.

A 11-year-old girl rescues a trapped draughtboard shark and guides it to sea in Tasmania pic.twitter.com/MY5c3aq0nV

This isn’t the first time Rea has been a wildlife rescuer. Her mother told the press, “She’s quite often coming home with orphaned pademelons, Bennett’s and rufous hare-wallabies, and she knows how to feed them, toilet them. Nothing that she does with animals surprises me anymore. I’m just really impressed.”

The girl has also long had a special love of draughtboard sharks. “She was so passionate about these beautiful sea creatures that one of the volunteers at the marine discovery centre actually hand-sewed her a draughtboard shark toy,” Gilbert shared, adding, “She spent a lot of her youth with this as her bedtime toy.”

As for the live shark that Rea cuddled, Gilbert said, “We saw it swim off and we stayed with it until we lost sight of it. It was a beautiful moment.”