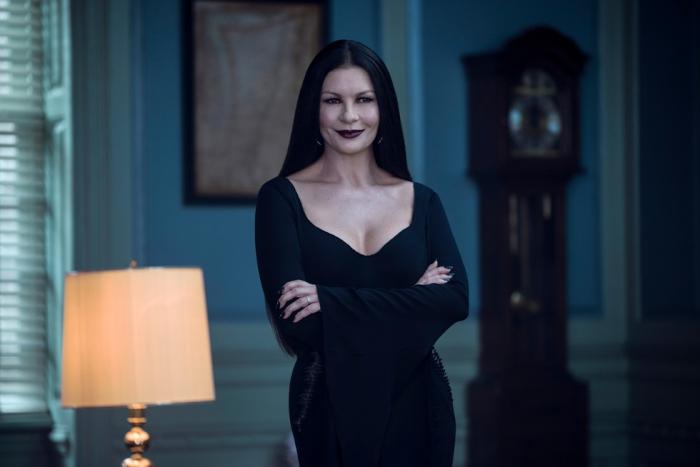 Every family is difficult in its own way, and the legendary Addams family is no exception. For years, we’ve been entertained by Charles Addam’s creations, particularly his little death trap, Wednesday Addams. Jenna Ortega takes on the role of the title character in Tim Burton’s new Netflix series, but the show isn’t just about the girl’s time at the legendary Nevermore Academy for outcasts. It’s also about Wednesday’s relationship with Morticia (Catherine Zeta-Jones) and their shared paranormal abilities.

The spooky, supernatural, and thrill-packed series tells the story of Wednesday’s time at Nevermore Academy, where she learns how to control her psychic abilities, attempts to stop a monster killing spree, and solve the murder case that nearly destroyed her parents. Wednesday and Enid Sinclair (Emma Myers) — a werewolf roommate — are determined to solve all the school’s perplexing puzzles at any cost — even if it means incurring the wrath of Principal Weems (Gwendoline Christie).

Tim Burton’s series explores Wednesday’s melancholic, dark visions and the existence of paranormal capabilities among the Addams family members as well as their family history. Wednesday’s visions play a significant role in the narrative. A Nevermore student constantly receives clues about the mysterious, murderous monster preying on innocent students through her exceptionally unexpected premonitions. They don’t terrify her; Wednesday simply wants the truth. The fifth episode, “You Reap What You Woe,” directed by Gandja Monteiro, centers on her premonitions and her tense dynamic with Morticia. The episode also takes a walk down memory lane while the present meets the past in flashbacks to Gomez and Morticia’s times at the Academy.

The fifth installment includes an interesting Parents Weekend at Nevermore. While her family is in Jericho, Wednesday accidentally implicates Gomez in the decades-old murder of Garret Gates, a normie and direct descendant of the town’s creator and outcast-hating colonist Joseph Crackstone. While he’s imprisoned, Morticia can barely function without her husband, but she and Wednesday collaborate to prove Gomez’s innocence while Wednesday delves deeper into the past in the story of Goody Addams (also played by Jenna Ortega), Wednesday’s powerful predecessor who also carried the gift of premonition. Accused of witchery, Goody fought the most formidable foe of Nevermore, Crackstone himself. Goody not only killed the antagonist and “stole” his land but she also helped build the school and founded the secret Nightshade association.

Gomez’s arrest allows the Addams women to bond while working on his release. What better way to prove his innocence than to exhume the supposed victim’s body? “This reminds me of when you first got your grave-digging kit,” Morticia says as Wednesday excavates Garrett Gates’ coffin. Once Ortega’s character has her vision in Morticia’s presence, she quickly understands what’s going on —- her daughter inherited her gift. The incident awakens something in the Addams matriarch, who sees herself in Wednesday Addams, and she decides to tell her daughter what occurred the night Gates was killed. Once she discovers Wednesday’s gift, they both realize how similar they are and how much they can learn from one another and how unstoppable they are when working together. After successfully proving that Gates was killed by nightshade poisoning, Gomez is finally free.

Morticia is a Dove with positive prophecies, while her daughter is a Raven with dark, foreboding visions, but in the episode’s final scenes, both women nevertheless realize they share more in common than they previously assumed. “I’m sorry you didn’t feel you could tell me,” Morticia says, referring to Wednesday’s psychic abilities. “I know we’ve had problems recently trying to navigate the treacherous shoals of our mother-daughter relationship. But, Wednesday, I’m always here for you.”

The girl confides in her mother, sharing how her visions started, how they work, and what provokes them. Wednesday stays at school, filled with a newfound confidence that she can solve the crimes of Nevermore. Morticia, as befits a good (and spooky) mother, reassures Wednesday that everyone has their own unique ways and there is no reason to stay in the shadows. “You have your own path to blaze. I don’t want to be a stranger in your life, Darling. I’m only a crystal ball away.”

Wednesday is now available for streaming on Netflix.


← Clutch: The Artist You Probably Don't Know Making the Best Music Videos Today | Everything You Need To Know About 'Good Will Hunting' For Its 25th Anniversary →