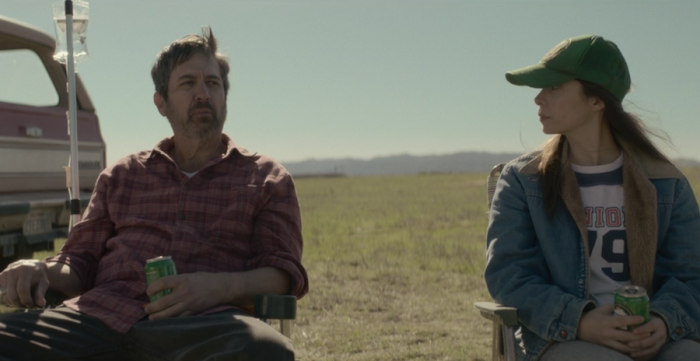 With One Heartbreaking Scene, 'Made For Love' Season Two Brings Its Philosophy Into Focus

“Under Open Sky,” the penultimate episode of the HBO Max’s Made For Love season two, absolutely wrecked me — but if I’m being honest, the episode wasn’t saying anything the whole show hasn’t been talking about this whole time. It’s more like its message finally landed, and with it, I could see all the ways the series has been cataloging its central conceit from the very start: That love is an inherently selfish, and self-deceptive, state of being. It’s easy to miss in season one, if only for the very fact that the Byron/Hazel relationship is very clearly not based on love at all. Byron’s professions of love are easily discounted by the fact that he doesn’t know the real Hazel at all, and any emotion Hazel may have at one time felt is destroyed when he put that spy-chip in her head. The sci-fi comedy seemed like an unsettling portrait of toxicity, a cat-and-mouse chase that had more to do with freedom than with love, but looking back I think Byron’s real crime wasn’t just trying to steal Hazel’s autonomy. In violating her mind and placing himself in it, he broke the natural state of human relationships. We never know each other, not really. Not like that. We fall in love with images of each other we create in our own minds and have to hope they are as close to the real thing as possible. That’s the risk of love, and that’s the problem season two brings to the fore.

Let me cut straight to the scene that shifted my perspective about the whole show: Herb and Hazel under that open sky. Herb — who has stopped the cancer treatments Hazel smuggled him into the Hub to receive against his knowledge — has decided he’s ready to die and asks Hazel to assist him with his suicide. They leave the Hub, set up camp chairs, hook up a drug drip, and spend one last perfect moment together before he dies peacefully with his daughter by his side. The problem is that the Hazel he’s with isn’t the real Hazel at all.

Season two introduces a new tech wrinkle in the form of downloaded consciousness, or digital copies of people. When Byron finally removes the chips from his and Hazel’s brain, she destroys them — but not before he secretly has the data from the chips downloaded to his system. In the Gogol mainframe these other Hazel and Byron replicas exist and fall in love and eventually scheme to escape into the real world. AlternaHazel is the first to succeed by manipulating Herb, telling him that she’s the real Hazel and the one in her body is the fake and it’s all another one of Byron’s dastardly plots. So Herb engineers the hijacking of his own daughter’s body, and then fails to notice — or fails to ACKNOWLEDGE that he notices — how different this new Hazel is acting. The main tip off? She’s pleasant. She doesn’t fight with Herb. She’s lacking all the baggage that makes Hazel who she is, because though she has Hazel’s memories she never experienced the feeling of living through those memories.

And seeing this new improved, balanced Hazel is what convinces Herb that he doesn’t need to stick around for his daughter anymore. She’ll be alright on her own without him, finally.

It’s absolutely gut-wrenching to watch Herb sit in that camp chair and reminisce with this other Hazel about what a pain in the ass she was a kid, and how much he loved her for it, and not once figure out that the woman sitting next to him is not the daughter he’s remembering. For two seasons the series was so focused on the Hazel/Byron dysfunction that the Hazel/Herb relationship seemed quaintly batty by comparison. There was certainly no reason to expect Made for Love would put parental love under the same scrutiny as romantic love, and yet the more I sit on that scene the more I appreciate the layers of self-deception at play. It’s not just that Herb doesn’t realize that his last perfect moment is with the wrong Hazel, it’s that he wouldn’t even be there if she was the right Hazel. He ignored the signs in front of him, so he could end his life with a clear conscience. And our Hazel — the real Hazel — would never have helped him if she’d been in control of her body. She’d already deceived him once in order to save his life, never bothering to ask if he wanted to be saved. She acts like she is doing it because she loves him, but really she just can’t handle losing another parent. She’s still not over the death of her mother.

And while we, the audience, may sympathize with Hazel and with Herb, it’s hard not to see that it’s AlternaHazel whose behavior comes closest to what we’d think of as real love, because she put her own selfish desire to live with Herb aside and listened to his desires. You know… if you ignore the fact that she tricked him into releasing her in the first place.

Oddly enough, the real Hazel and Byron seem to be on the path to reconciliation this season, despite Hazel secretly working with the FBI to bring down Gogol and Byron secretly copying Hazel’s consciousness. They finally have a real conversation about their marriage and acknowledge that it was never about love at all. Hazel married Byron to escape from her life, and Byron hoped Hazel could fix whatever was broken in him — which is probably two of the most common reasons people get married that aren’t love, if you think about it. Obviously that all comes to a crashing halt when Hazel and Byron lose their bodies to their copies, but it makes for a very exciting season finale. Hazel is able to fight AlternaHazel for control and take her body back, only to find out that she’s pregnant because the fake Hazel and Byron were making the most of their newfound physical existences. Faced with the choice to rescue Byron or let AlternaByron keep the body, she… chooses to keep AlternaByron around. Much like AlternaHazel, the digital copy of Byron lacks his baggage and thus is a happier, more stable person — and specifically, he doesn’t have the professional drive to run Gogol, allowing Hazel to take over the whole company. Plus, AlternaByron will probably make a better father than the real Byron would.

If this is the end of Made for Love, it’s a fitting conclusion to the series: Hazel comes out on top while Byron suffers for his misdeeds. I can’t help but hope HBO renews the show, though, because this finale also sets up a hell of a season three. Knowing what we know now about how the show examines parenthood, I want to see Hazel take on motherhood. I want to know if it tempers her selfishness, or amplifies it. There’s also the fact that Herb is only mostly dead — he’s been cryogenically frozen and a copy has been made of his consciousness, so Hazel has to tools to bring him back whenever she wants now that she’s running Gogol. Will Byron find his own way to break free and take his body back, and would Hazel notice if he did?

Is love the ability to put aside your self-interest and put another person first? Or is it finding someone whose self-interest aligns with your own? I think Made for Love is still on the fence, but it’s no wonder that the most stable, believable romance on the show is between Herb and his sex doll Diane.

← Reddit Asks the Question: 'What Is Your Number One Obscure Animal Fact?' | 'The Avengers' Remade Spectacle in its Own Image →