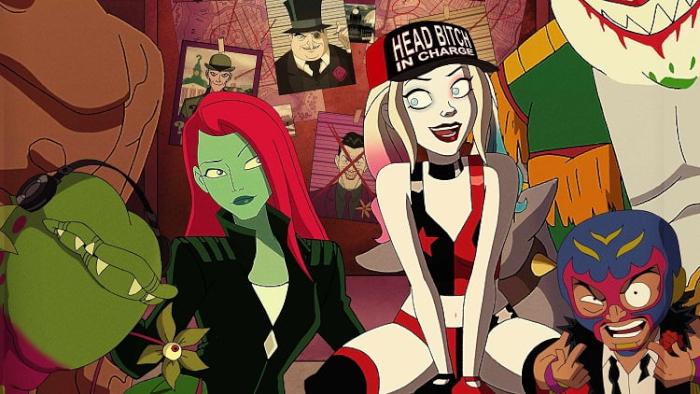 Why Does ‘Harley Quinn’ Work So Damn Well?

Harley Quinn, now airing its bloody, profane, hilarious delight of a third season on HBO Max, is far from alone in its field of satirical adult animation, but for me, it still stands out. The show’s sexy, campy, viciously fun flavor hits all the right notes—from tight storytelling to lots of gay sex to meta-mocking “release the Snyder cut” fanboys to dunking satisfyingly on the likes of Henry Kissinger, etc.

The basics: Harley Quinn follows the titular character (voiced by Kaley Cuoco) in her evolution from sexy sidekick to complicated independent badass. Last season saw Harley discovering and confronting her feelings for Poison Ivy (Lake Bell), which culminated in a Thelma and Louise-callback heart-warmer of a season finale. The third season picks up with an arc about the two women coming out of their honeymoon phase and into the hard work of balancing a long-term relationship with trying to terraform the Earth, win best couple at the 83rd annual Villy Awards, and help Clayface (Alan Tudyk) launch his acting career in the James Gunn (voiced by James Gunn) directed biopic of Thomas Wayne.

In short: Working out the messy complexities of adulting, relationshipping, and supervillianing in the campy-laden absurdity of the DCEU. For a character first introduced in Batman: The Animated Series only thirty years ago (where most of the Batman canon characters are pushing 85), Harley Quinn is a powerhouse in the franchise.

Beloved franchises are often difficult to satirize well because, paradoxically, of the affection audiences have for the characters going into the show. Laughing at something you love is harder than you’d think—especially when the thing in question is something as borderline ridiculous already as the Batman universe. But Harley Quinn takes its characters seriously as well-developed, lore-laden players.

The characters and their emotional arcs still get to matter, even while we’re laughing at/with/because of them. It’s extremely satisfying and inventive to take the self-important, agent-of-chaos Joker (also Alan Tudyk) and churn him through a storyline where he figures out he really likes being a suburban stepdad. (As he points out, lots of suburban dads balance their lifestyle with also being serial killers.) Harley and Ivy watching porn-star re-enactments of themselves is played for a laugh and then, somehow, played for plot.

My favorite Batman comics (and I have read a lot of Batman comics) have always been the Bat Family arcs, which the show takes dead aim on in its third season in the best way possible. Harley Quinn’s gang and the Bat Family ending up in the same morale-building escape room sounds like it shouldn’t work as an episode premise, but it absolutely does. Robin (Jacob Tremblay) flipping off Nightwing (What We Do in the Shadows’ delightful Harvey Guillén) at every opportunity has no right to be as funny as it is. Commissioner Gordon’s (Christopher Meloni) absolutely unhinged priorities and Bane (James Adomian) really wanting his pasta maker back are, seriously, both endearing and engrossing. If I’m not very much mistaken, the show also takes its swings at the orgy episode of The Boys meets Eyes Wide Shut.

Harley Quinn is a show made by people who know the comics, who take the characters seriously, and who know how not to punch down in their humor. Even when there is a whole lot of punching. (You see what I did there? … This is why I don’t write for funny shows.)

The first season (for me) took a few episodes to really get off the ground, but it got there—and the quality hasn’t suffered noticeably since.

On that note, please join me in a summoning circle for some common sense at HBO corporate, so that this bonkers Discovery Plus development doesn’t endanger this genuine charmer of a series.

← How Are We Supposed to Feel Excited About VFX Anymore? (Or How Unionized Labor Improves The Product Too) | Not Even 'The Batman 2' Is Safe at Warner Bros. Discovery →