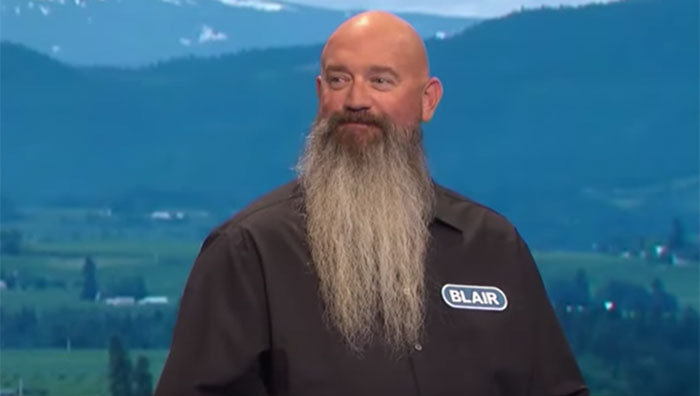 The 'Wheel Of Fortune' Intro That Everyone's Talking About

The patter on game shows is often pleasant to awkward, with contestants nervously highlighting their hobbies or shouting out to loved ones as the host feigns interest. Well, things got interesting on Wheel of Fortune when bearded contender Blair Davis took his moment in the spotlight to declare he was “trapped in a loveless marriage.”

Asked to talk about his family, Davis offered, “I’ve been trapped in a loveless marriage for the last 12 years to an old battle-ax named Kim. She cursed my life with three step-children named Star, R.J., and Ryan, and I have one rotten grandson.”

“No wonder you came here,” Sajak joked, “You just wanted to get away from everybody.”

However, this wasn’t an example of shots fired as much as Davis being “facetious,” which host Pat Sajack noted before they went on to talk about how the “rotten” grandson is why the contestant’s beard is so long.

Davis’s playful spin on the contestant intro was celebrated online, where the above video has already been viewed 1.2 million times. Twitter rejoiced.

i’ve always secretly hoped someone would say what blair did on wheel of fortune 😂 no one’s spouse has rainbows shooting out of their ass like everyone acts… blair was just the guy to say it 😆 @smileyradioshow. and i have to think he was being sarcastic.

Super bummed Blair didn’t win #WheelOfFortune tonight, because he had the best intro of all time
pic.twitter.com/pvvdDnllMB

I want to Be Blair when I grow up. #WheelOfFortune https://t.co/3TWiNydelP