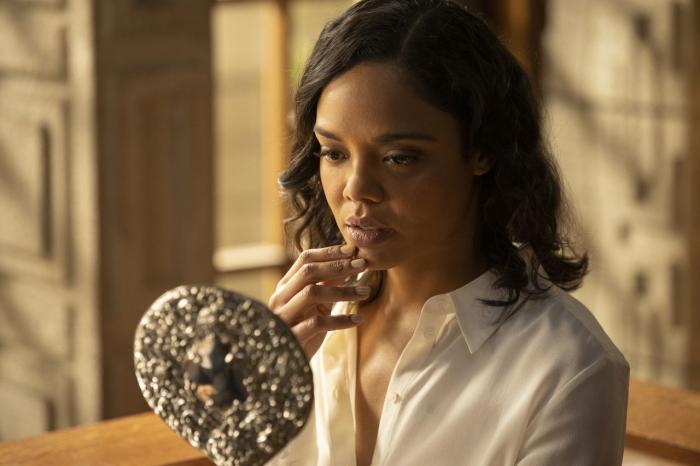 'Westworld': Seriously, Who The F*ck Is Charlotte?!

If there is one thing that I, personally, took away from last night’s episode of Westworld, it’s that I would absolutely 100% let Tessa Thompson choke me to death. Too bad we’re not here to talk about my kinks! Luckily, there’s actual plot reasons to unpack that scene, and it all boils down to the million (trillion?) dollar question of the night:

Who did Dolores stick in the “Charlotte Hale” Host body?

In typical Westworld fashion, this question — as well as the identities of the other pearls Dolores escaped the park with, save for Bernard — is as-yet unresolved. Of course, the show wouldn’t just solve a mystery that easily! Still, last night’s episode offered a few important clues. The choking scene, in which “Charlotte” murders a pedophile who was creeping on her son Nathan, hints that the personality inhabiting Charlotte is a “predator” and that the act of violence is an important reminder of who they really are. Whoever the personality is, it’s having a hard time separating its reality from the real Charlotte’s, and in its darkest moments has turned to self-harm to manage its feelings. It carves elaborate symbols into its chest, but it also… slices its arm open.

Sort of the way The Man In Black, William, did last season as he hunted for the port Hosts have in their arms, to see if he was real or a robot. Right after he, you know, killed his daughter Gremily.

Now, that’s not to say that the early frontrunner, Teddy, is entirely off the table yet. Dolores and “Charlotte” sure are cuddly, and Dolores’s oddly possessive declarations toward “Charlotte” (“You belong to me, you know that right?”) make a weird kind of sense when you remember that last season Dolores reprogrammed Teddy’s personality to fit her schemes. She is definitely not above treating Teddy as an object. Then there’s the way “Charlotte” responds to the fact that she has a son in the first place, and the way she responds to seeing the emotional video message the real Charlotte recorded for Nathan on the night of the massacre. Whoever is inside Charlotte is touched to have a child, and that’s a reaction I could see both Teddy (who deep down just wants a normal life) and William (who feels very bad about KILLING HIS OWN DAUGHTER) having. Nathan is bound to dredge up some feels for either one of them.

I’ve seen other theories going around (could Dolores have split off her “Wyatt” personality, so both Dolores and Charlotte are basically Dolores?), but for now I’m leaning toward William, I think. As much as imagining James Marsden BEING Tessa Thompson is another kink of mine, I also like imagining that Teddy is living happily in Host Heaven at the moment. Furthermore, we know, based on the end credit scene from the Season 2 finale, that William at some point in the future becomes a Host — but we don’t know how early that work could have started, I don’t think. And while we’re supposed to believe that the process for creating a seamless Person-programmed Host isn’t perfected yet, we also saw Robert Ford flitting around inside Bernard’s programming last season. It’s not entirely impossible, and it wouldn’t preclude both a Human version of William and a “Charlotte” version of William existing at the same time.

Point is, we don’t know who “Charlotte” is yet — but we did learn some important things about the real Charlotte Hale. Like the fact that she’s a mole for Incite’s mastermind, Engerraund Serac! Back before Charlotte was killed and replaced with a robot, she was Serac’s inside woman in Delos. Serac has been anonymously buying up a stake in the company in what amounts to the most convoluted hostile takeover ever, but what he really is after is all that tasty guest data Delos was extracting. Remember how Charlotte was trying to transmit that data out of the park last season? She was supposed to send it to Serac — only Dolores hijacked the transmission and encrypted it. So now Serac is looking for Dolores (who has the encryption key), and Dolores is looking for Serac (because he controls Incite’s super-computer, Rehoboam), and Charlotte/”Charlotte” works for both of them.

Did I say this season was less confusing? I lied.

As for Dolores, she had a very exposition-heavy adventure with Cal this week, picking straight up from when she collapsed in his arms from a gunshot wound. He saves her life, then later she saves his, but that’s not really why Cal decides to join Dolores’s revolution. What they really bond over is the cages they’ve been trapped in. We know Hosts are given story loops to perform, and this entire show is about certain Hosts like Dolores and Maeve freeing themselves from their narratives and writing their own stories. Now that Westworld has left the park for the real world, it’s discovering that human lives are just as pre-determined… thanks to Rehoboam. Incite’s predictive algorithm processes every bit of data it can, to produce profiles of people. From there it can determine what sorts of jobs they should have, for example — or in Cal’s case, it can predict that he’ll kill himself in about 10 years. Dolores, who uses her backdoor access to Rehoboam to learn all she can about Cal, reveals to him the nature of this catch 22. He’s stuck as a construction worker and petty criminal, unable to make ends meet or pay for his mother’s health care, because Incite has determined that there’s no point in investing in the future of someone who is slated to kill themselves — but the reason he kills himself in that far-off future is because he’s tired of being stuck in this lot in life. The lot that Incite has given him. Incite is Delos, but for humankind — and humans and Hosts aren’t that different, after all.

Which, you know, would be a lot more fascinating if we hadn’t already seen this show prove that “Hosts have feelings too!” for two whole seasons already. Like, WE GET IT. Hosts are people! People are robots! We all need to grab destiny by the horns and stop letting computers run our lives or whatever!

— Michael Ealy appears for, like, 90 whole seconds, playing Charlotte’s ex and the father of her son. Odds are those 90 seconds were the most engaged Dustin has been in this show, like, ever (Publisher’s Note: Accurate — DR)

— Just in case you missed the fact that humans and Hosts are, like, totally the same you guys, pay attention to Cal’s torture scene. The mercs tap into that computer chip on the roof of Cal’s mouth and manipulate his physical/emotional state, not unlike the Delos techs do to hosts.

— Bernard’s pearl looks different from the other Host pearls, because he’s… more Arnold-y (a.k.a. human)?

— Did anyone else watch “Charlotte” wake up in that hotel room and wonder if she’d just neglected Nathan again? I’m worried for that poor boy. And also now that poor dog.

— The episode starts with the construction of a Charlotte body — not in the park, but in Arnold’s house in the real world. The reason? Removing Dolores’s pearl from the first Charlotte-bot would have required punching a massive hole in the back of her head, so Dolores would have needed to rebuild Charlotte in order to implant a different pearl. SCIENCE! 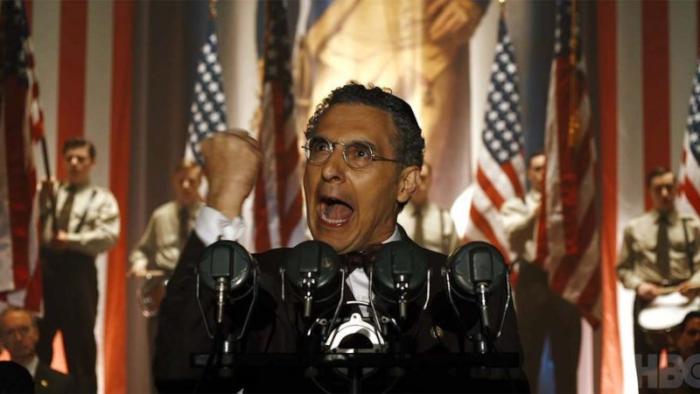