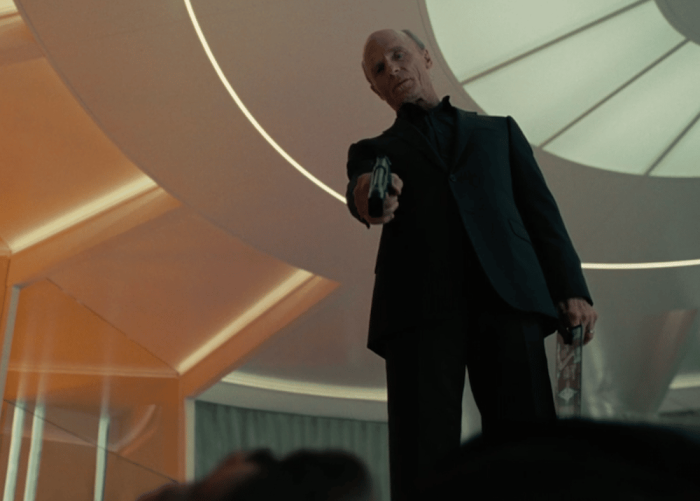 'Westworld' Goes Back To Basics With A Bold (Brilliant? Bad?) Move

I wasn’t able to recap last week’s Big Dang Roomful of Calebs episode for personal, beach-related reasons, and now I’m back just in time for Westworld to drop its penultimate Big Dang Death episode! If you watched the episode, then you know that the end is everything: The Man in Black-bot kills Maeve, Charlotte, and Bernard, then triggers the destruction of the Tower after releasing one final command to humans and hosts alike — a command to battle to the death. Meanwhile, Teddy tells Christina that SHE ISN’T EVEN REAL OMG. The show has seemingly wiped the board of the characters we thought were in it for the long haul and reduced its playing pieces to two: The OG cat and mouse duo of William and Dolores (or at least, Christina-who-is-basically-Dolores). How did we get here?

Simulations and the Sublime

First off, it’s worth noting that Episode 7 finally confirmed something that I’d assumed as a given since the beginning of the season: The servers that William/Charlotte purchased at the Hoover Dam do contain the Sublime (a.k.a. Host Heaven), but they never had access to it because Bernard has the only key. The episode begins with back-to-back scenes of Bernard and Maeve entering the Dam to open the doorway to the Sublime, but the first scene is one of the many simulations Bernard ran inside the Sublime while trying to find the best path toward survival (we can tell because scenes in the Sublime are shot in letterbox ratio). The second scene is Bernard and Maeve opening the Sublime in the real world. With so much going on in this episode, and with the clock winding down on the season, why waste precious minutes repeating the same scenario? Part of it is to illustrate Bernard’s simulation methods, obviously — to lend weight to his assertions that there is no path forward where he and Maeve survive, that the extinction of humans and hosts alike is all but guaranteed, and that there is one path that leads to hope for the future. But I think we also needed to see the difference between his mental model of Maeve and the real thing. In his simulation, he imagined that Maeve would abandon him and the mission if she knew she was doomed, which is why he withholds the truth from the real Maeve — but the real Maeve doesn’t abandon the cause when she learns her fate. Simulation Maeve points out that Bernard is playing god but that he has little faith in his creations, and that’s a theme that is very relevant to the episode.

Take Charlotte, for example. She decides to shut down the cities and force hosts to Transcend because Caleb has made her realize that they won’t evolve on their own — in fact, they don’t want to. They’re literally killing themselves to get out of her master plan, and their deaths are her failure as a god. But we also see what her “Transcendence” truly is, and it’s nothing more than dropping host pearls into shiny new armless robot bodies. Her vision of hosts shedding their human bodies to become something new and pure is still limited to being in a body, and a bipedal one at that! She could have at least forced them into shapeless clouds of nanobots or something! But she’s doing all of this while still inhabiting her own crispy body — the one that was burned when Hale’s family was killed — and the hypocrisy of her expecting hosts to shed their human sentimentality while being unable to shed her own is absolutely the point. She is asking more of her people than she herself can do, whereas Bernard needs his people to do more than he expects them to.

When Teddy explains to Christina what hosts are, he says they’re “reflections of the people who made us” — and I keep coming back to that phrasing. We easily toss around the term “god” on this show, but all we’re really talking about is flawed creatures who create or control other flawed creatures. All these grand plans we’ve seen over the seasons were always doomed to failure, because the ones in control weren’t perfect. Their flaws perpetuate into the systems they create. And for Charlotte, her biggest mistake was keeping William around.

When I listed all those deaths up top, I failed to mention that the Man in Black-bot started his little murder spree by killing his imprisoned human counterpart. Upset at the news that Charlotte is planning to shutter the world, the host William seeks out the advice of the human William and gets a heaping pile of that patented William nihilism — something about how the meaning of life is destruction and only cockroaches survive, yadda yadda. Mostly, though, it’s a chance for the MiB-bot to recognize that he has far more in common with human William than he does Charlotte or the other hosts (what are reflections but copies, anyway?). He doesn’t want to shut down the cities, because playing in theme parks was always his bag! That’s the full expression of himself he can’t quit, and so he decides to live up to his potential. He dons his black hat, overthrows Charlotte, and initiates one final game — a game where everyone kills each other until only the cockroaches are left.

I’ve noted for weeks now that as the storylines became clearer, Christina’s still remains siloed from the rest of the plot, and this episode played with that tension. The invasion of the Olympiad office was an elaborate dance between the actions of Christina and those of Frankie/Stubbs and Bernard/Maeve, where they all seemed to be coinciding. Christina orders the game writers to destroy their files and set off a fire alarm, then orders a guard to unlock all the doors. Meanwhile, Frankie and Stubbs in particular seem to benefit from these actions, slipping inside the office amidst the confusion and making their way easily to Caleb through all of those unlocked doors. The one hint that something is amiss, though, is a very deliberate shot of Christina and Teddy exiting a hallway just moments before Frankie and Stubbs enter it from the other direction, with no indication that the parties ever crossed paths. How is that even possible?

Well, according to Teddy it’s because Christina is not in this world. “It’s real, but you’re not,” he tells her. WHAT DOES THAT EVEN MEAN? Well, maybe instead of wondering what Christina is, we should figure out WTF is up with Teddy. He should be in the Sublime, so it was always a little sus that he was walking around in the real world when we knew Charlotte couldn’t open the Sublime and Bernard hadn’t yet. Now, one possibility is that Christina, like the mock-up Maeve, exists purely in one of Bernard’s simulations — and since he runs those in the Sublime, it makes sense that Teddy could be there. The problem is that if she WAS in a simulation, it wouldn’t explain why her actions seemed to have real-world consequences — and also her scenes weren’t shot in letterbox. Although maybe that’s why Bernard opened the door to the Sublime, so Christina could… enter the real world? Or something?

The other thing I’ve wondered is if Christina is basically a ghost in Charlotte’s machine. She is the remnant of Dolores that has to perpetually exist, simply because Dolores was the source code for all the hosts since the beginning. In that scenario, Teddy is likewise a fragment of Dolores’s mind, a trusted face to awaken Christina to her truest self. As usual with Westworld, I fear I’m making things too esoteric when the show is gonna reveal its hand to be stupid-simple, but… I mean, eff it, that’s literally why I still watch this damn show. JUST LET ME HAVE MY WILD-ASS THEORIES.

The point is, when Bernard said, “I’ve seen a path, but I can’t do it alone,” he could have been talking about Maeve or Frankie or any of the other people he’s teamed up with, sure. However, I think he really meant Christina, and somehow she’s the ace up his sleeve.

- Bernard tricking Stubbs into thinking he’s fated to die was just some top-tier trolling. The surprised smirk on Stubbs’s face when all the bullets missed him might have been the best moment of the episode!

- Do you ever stop and think about how the show could have let Daniel Wu stay on as some sort of awesome Host Terminator and instead it just … dropped the character entirely?

- There was some nifty symmetry between Christina drowning herself in the tub to prove to herself she’s a host, and Charlotte and Maeve literally dying in that pool of water. But are they really dead? I mean yeah, headshots should be a sure thing but we’ve seen these characters die so many times already. I’m just a little wary of being like BUT THIS TIME IT’S REALLY REAL.

- Is the season finale going to be the series finale? The ratings have been tanking, and realistically I don’t know how far this show can go if it actually did just kill off half its cast. Would you tune into a Maeve-less Westworld?

- OK, I have to say it: Westworld may just be bad again. Like, steaming pile of hot nonsense bad. But unlike last season, it’s not boring bad, so I don’t hate it yet! Though I obviously reserve the right to re-evaluate my assessment after next week’s finale.

← Will There Be a Second Season of 'Becoming Elizabeth'? | 5 Shows After Dark: 'Better Call Saul' on AMC, 'In the Dark' on The CW →