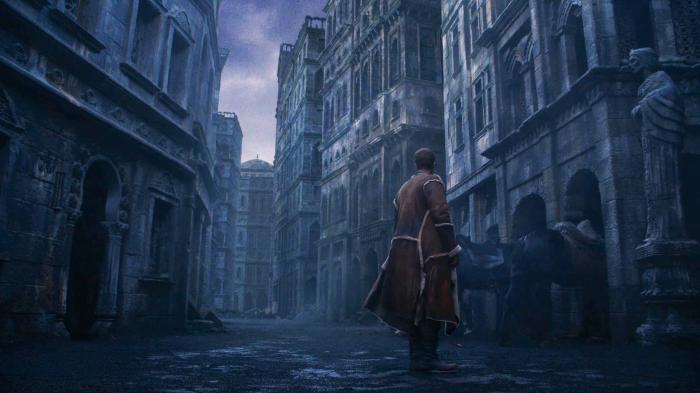 I went down to the basement to get a package from the freezer and there it was. I don’t know how it fell off the bookshelf but it lay there, staring at me from the floor like bait in a trap. Taunting me. 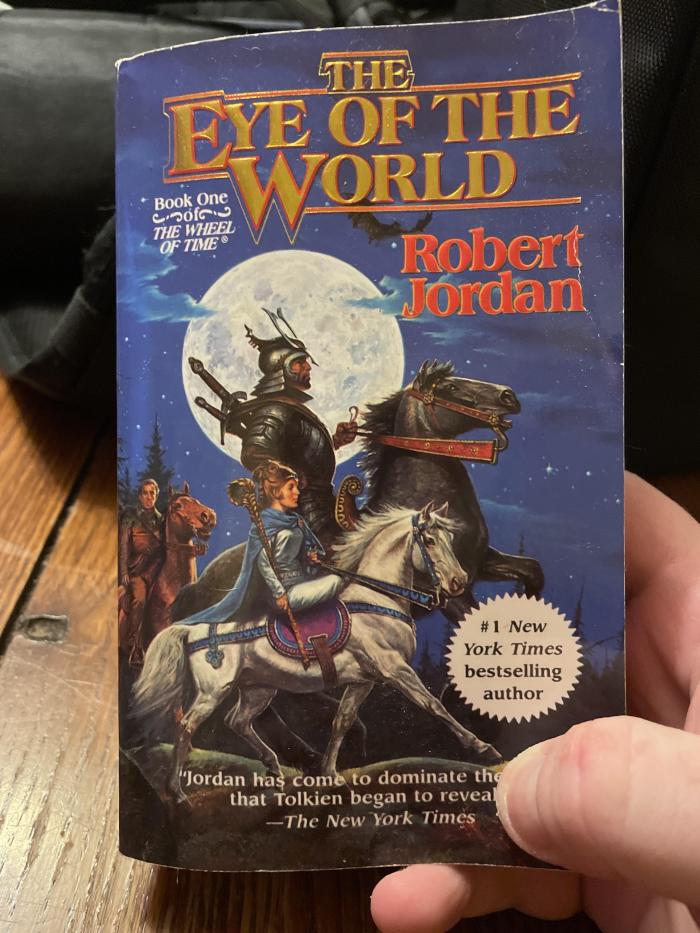 I’m going to regret picking it back up. I just know it. But for now, on with the recap!

We are introduced to the Children of Light, aka the Whitecloaks. In the novels, the Whitecloaks are a powerful military force from the nation of Amadicia. Nominally led by a king, Amadicia is actually ruled by these reactionary fundamentalists who hate channelers in general, Aes Sedai in particular, and view anything fun with deep suspicion. It’s basically Utah. Inquisitor Eamon Valda enjoys a roast ortolan-like songbird and the sound of his own voice while he watches an Aes Sedai burn at the stake. He has removed her hands and along with it her ability to weave, and she burns to death as he watches. He adds her ring to the six already on his belt.

At the end of the densely packed series premiere, Lan, Moiraine, and their charges fled the shattered town of Emond’s Field with a battalion of Trollocs hot on their trail. They headed east toward the city of Tar Valon, the seat of Aes Sedai power. They have hundreds of miles full of hostile forces to cross before they reach it. What fantasy story would be complete without an eternal slog towards doubtful safety? Their first destination is Taren Ferry, the closest spot to cross the eastern river. Master Hightower reluctantly lets them cross before his son arrives, and they reach the far bank right before the Trolloc horde makes it. One demonstrates why Trollocs refuse to cross deep water when it falls in and drowns, 300lbs of dimwitted muscle unable to swim. The Fade arrives after and shows off its rows of teeth in a scream. Hightower wants to cross back in a fruitless effort to rescue his son, but Lan and Moiraine display the ruthlessness necessary to save the world. Lan cuts the line, and Moiraine conjures a whirlpool in the middle of the river to sink the ferry. Cursing Aes Sedai, the ferryman leaps into the river and drowns alongside his craft. The party races into the dark, putting as much distance as possible between them and their pursuers. 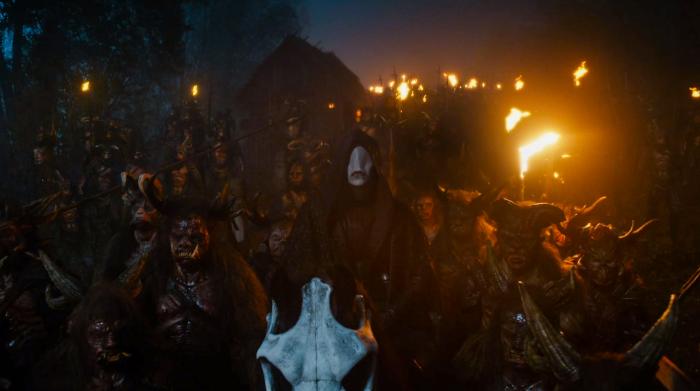 When everyone beds down for a rest, Moiraine pulls Egwene aside. She tells Egwene first of the Three Oaths all Aes Sedai swear; to speak no word that isn’t true, to make no weapon for one man to kill another, and to never use the One Power to kill except in defense of her own life, that of her Warder, or another Aes Sedai. Egwene learns of her own ability to channel, and Moiraine shows her the proof of this with a glowing sapphire. After the lesson, Egwene attempts to curl up with Rand for comfort, but Rand’s too busy being a petulant little man-baby to reciprocate. Stung, Egwene leaves, and Rand falls into sleep. He wakes to a sudden coughing fit, one that continues until he reaches into his mouth and pulls a dead bat from his throat. Gross. He sees a faceless man with eyes of fire staring at him from the trees and wakes again. Being truly awake this time is cold comfort, as the ground is covered with dead bats. Turns out all four youngsters had similar dreams, filled with bats and eyes of fire. Moiraine is deeply disturbed and insists they tell her if it happens again, but refuses to tell them why. Rand’s had enough of her evasiveness and demands answers. Moiraine provides little before riding off. Egwene pauses long enough to tell Rand off before following, leaving Mat to talk sense. 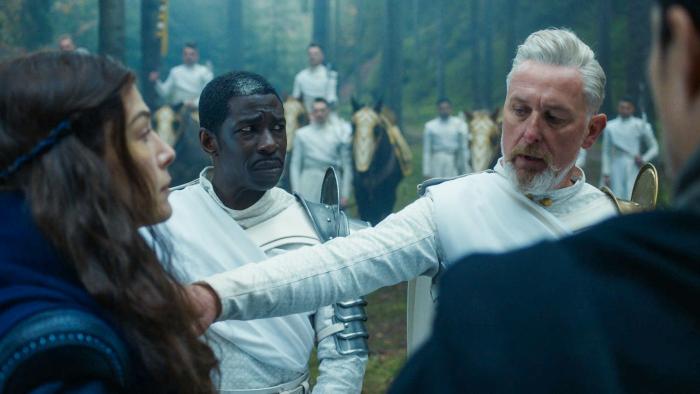 The party runs into the Whitecloaks in the woods. They are led by Geofram Bornhald, one of the few good apples remaining in a rotten barrel. He tries to let the party go but they’re interrogated by Inquisitor Valda, a man in need of a good hanging. Moiraine demonstrates how the Aes Sedai misdirect without lying, and the party is released. They travel a while, singing and occasionally stopping to gaze pensively into the distance like lost hobbits. Perrin’s wound is worse, and he has an odd encounter with a pack of wolves before the Fade and Trollocs make a sudden experience. With Moiraine unconscious Lan makes the executive decision to hide in the ruins of Shadar Logoth, a dead city so dangerous even the Trollocs fear it. Mat gives Perrin a knife forged by Laila, and Rand and Egwene bond briefly in the ruins. Despite Lan’s warnings Mat wanders off in the night and is led to a golden dagger by a mysterious shadow. 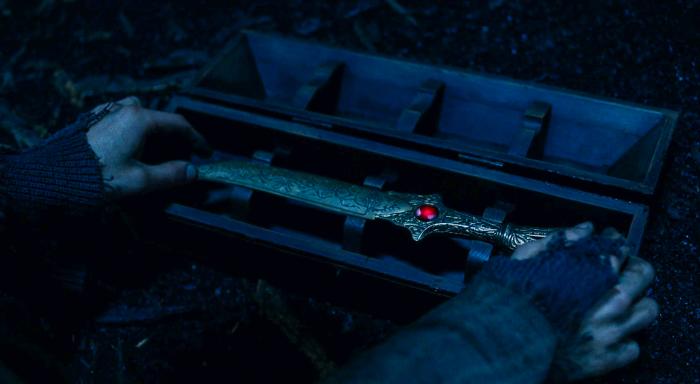 He returns when the horses start to scream, and watches in horror as one of them is enveloped by creeping shadows and melts. Divided into three by Mashadar, a formless horror that devours all organic life, the party flees for its lives. Mat and Rand force their way through a crack in the wall, and Egwene and Perrin are forced to leap into the river from the other side of the city. Moiraine and an exhausted Lan are ambushed by Nynaeve, bloody and furious. She’s captured by Lan and agrees to help Moiraine because it’s her only chance to rescue her friends.

With no reliable way to find one another, Mat and Rand, and Egwene and Perrin each decide to head east toward Tar Valon. Perrin dreams of the man with burning eyes once more, and a wolf devouring Laila’s body. In the real world, wolves herd Egwene and Perrin to wagon tracks that lead to a band of the Tuatha’an - pacifist, vegetarian travelers who wander the globe in search of an ancient song. All their wagons need are a few Phish bumper stickers and they’d fit right in at Hampshire College. 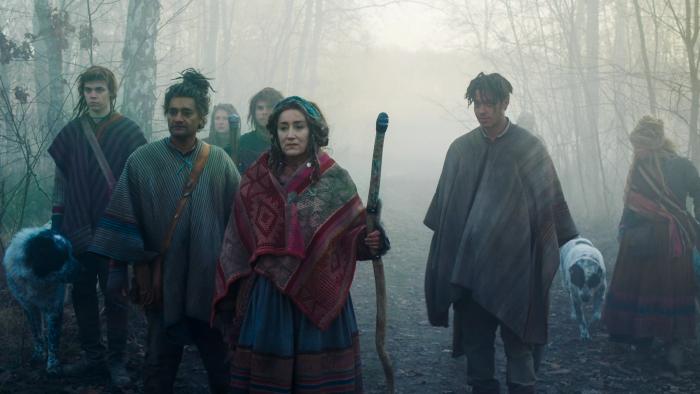 Mat and Rand head through the hills to Breen’s Spring, an ugly mining town where they’re greeted by a dead man hanging in a cage at the town limits. They bargain for room and board with barkeep Dana, who takes them on in exchange for chores like chopping wood after Mat loses all his coin in a practical lesson about trust from first a pickpocket and then a gleeman (if this were a DnD game he’d be the bard). Mat, becoming more morose by the hour, is determined to make his way home alone and robs the dead man of a glowing purple stone. Interrupted by the gleeman, Thom Merrilin, Mat learns the dead man is an Aiel, a desert dwelling warrior ambushed by the small minded miner folk. The Aiel has red hair, something unusual in the rest of the population. Mat finds something familiar in this old man and they bond a bit. Rand is determined to find Egwene and Perrin, and push on all the way to Tar Valon if necessary. Dana chats and flirts with them both before a sudden shift in attitude unnerves Rand. She locks him up in the woodshed behind a door she insists is too strong for Rand to knock it down. They’re both shocked when he manages it anyway. Rand and Mat run from their lives, chased by Dana wielding Rand’s sword. They’re cornered and horrified to learn she’s a Darkfriend, and has already called a Fade to take Rand and Mat to the Dark One. He knows one of the four is the Dragon and has the potential to break the Wheel, ending the eternal cycle of rebirth that traps him. Thom puts a thrown knife through Dana’s throat, and the trio flees town without most of the possessions. Meanwhile, with Moiraine near death from Trolloc poison, Lan leads her and Nynaeve to Liandrin Sedai, a sour-faced Red Sister whose party has captured Logain, a false Dragon and male channeler. 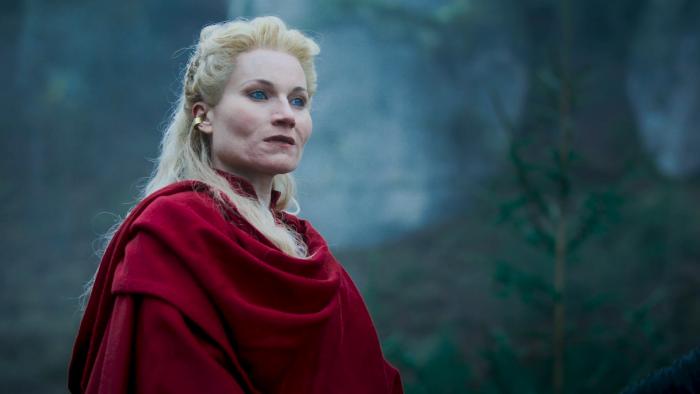 And that’s it. After the frenetic speed of the series premiere, the next two episodes are comparatively sedate. There’s a lot of travel broken by sudden terror, and Rand’s continued temper tantrums. It’s only after the party is divided that Rand acts more mature. Not that he has much choice; with Trollocs somewhere behind and Mat sinking into cynicism and suspicion, he’s forced to rely on himself rather than spend all his time stomping his foot. Egwene and Perrin’s trek through the wilderness is thankfully shortened. There’s only so much time I can watch someone wander across a grassland before my brain runs out my ears. But the scenery and set-pieces remain beautiful. It’s a shame the Shadar Logoth scenes were so brief; I’d have liked to see more of the city.

The sexual revolution of Randland continues. Dana assumes - or perhaps pretends to assume - Mat and Rand are a couple, and Rand’s cool with it. Speaking of Dana, can I pause for a moment and say how absolutely gorgeous Izuka Hoyle is in peasant dress? Talk about making the Shadow look appealing. It’s a pity she’s not around longer. 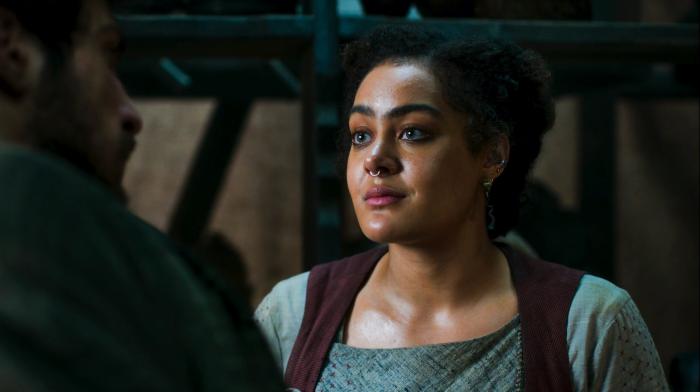 While we wait for the next episode, I’ll briefly touch on changes from the books, and offer more context for some events. The largest of these involve the absence of Min, a gifted young woman and potential love interest for Rand he meets well before reaching Shadar Logoth, and the late appearance of Thom, who originally left Emonds Field along with Moiraine’s group. Both are fan favorites and will no doubt play larger roles as things continue. The other big absence is Elyas, a solitary man who lives with wolves and originally saves Egwene and Perrin from starvation. He’s the one who explains Perrin’s connection to wolves and leads them to the Tinkers (the Tuatha’an). Though a fun character he’s not necessary to the story and I won’t be surprised if he’s cut entirely. Perrin’s sad sack attitude continues, and unfortunately so does Mat’s. There’s an explanation for it coming, but he started out much more doom & gloom than in the books, and his occasional one-liner isn’t enough to counter it. Rand acting like a bitchy child is, unfortunately, canon. It made more sense for the character when he was 17, I think; 20 is a bit old for it. 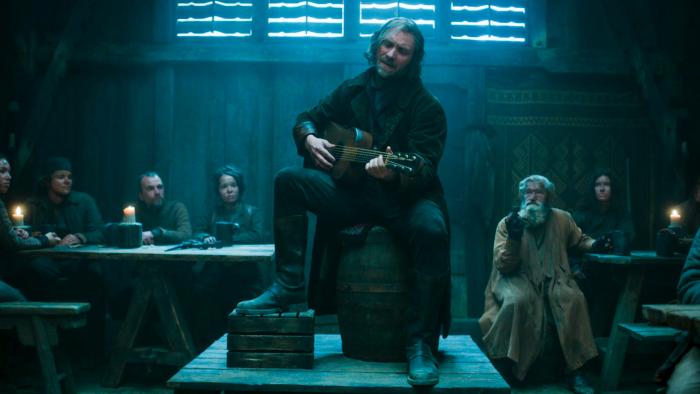 Eamon Valda was always a bigoted shitbird, but was not originally a Questioner, and the Whitecloaks were a lesser threat in cities and to the Aes Sedai than they are now. Removing the Aes Sedai’s hands is a clever idea; although the ability to channel is itself entirely mental, most Aes Sedai require gestures to channel to any real purpose. I’m intrigued by the choice to make the Whitecloaks a much more effective foil to the White Tower’s ambitions than they were in the book, and will go into greater depth on that at a later date.

The events in Shadar Logoth were, from a book reader’s perspective, a disappointment. Mashadar, the creeping death feared by men and Trollocs alike, is a much more impressive silvery mist in the books. I suppose special effects budgets only stretch so far. Along with Mashadar the party should also have run into Mordeth, the spirit of the man whose evil transformed the shining city of Aridhol into the shadow-infested ruins it is now. His is the shadow that led Mat to the dagger. And though the novel talked about Liandrin’s involvement in capturing Logain, we didn’t meet her until much later in the story.

Numerous questions remain. What is Perrin’s connection to the wolves? Who is the flame-eyed man? Why has Mat’s mood taken such a sudden downturn? What other Darkfriends lie in wait? Tune in this Friday to find out. Or not. Either way, expect a great deal more walking.