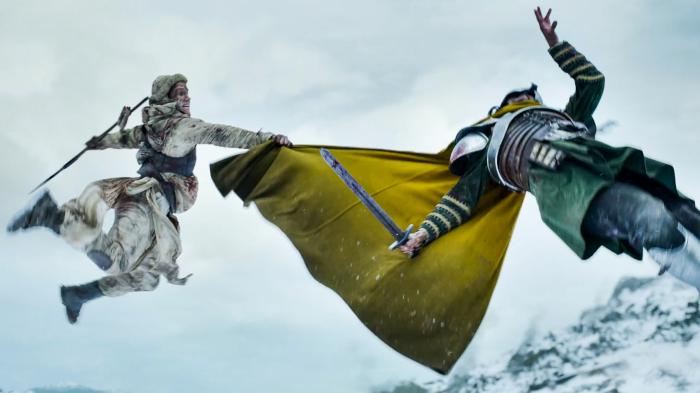 For an episode titled “The Dark Along the Ways” we sure don’t spend much time in them. But we have forward momentum again, and that’s a good thing. This penultimate chapter begins with a battle on the slopes of Dragonmount, a single Aiel woman against a number of armed and armored soldiers. Her late-term pregnancy hardly slows her down despite her contractions, and in one of the better action scenes so far she swiftly dispatches her attackers. One stabs her in the side before his death, however, and she collapses to the ground to give birth. One last soldier arrives before we cut away.

Moiraine has brought the entire party save Mat through the Ways to the city of Fal Dara, though not before they discover the Trollocs are using the Ways to swiftly transport armies without detection. Rand is furious Mat was left behind, but Moiraine clearly feels he’s unsuited for the task ahead and fears that if Mat faced the Dark One he would almost certainly turn to the Shadow. The entity known as Machin Shin torments them with whispers of their darkest fears after being summoned by Egwene’s channeling. Looking more like metal shards than the original Black Wind from the books, Machin Shin feeds on their fear and despair, and likely their lives had Nynaeve not fought it off while Moiraine opened the Way. The party escapes, haunted by the messages they heard. 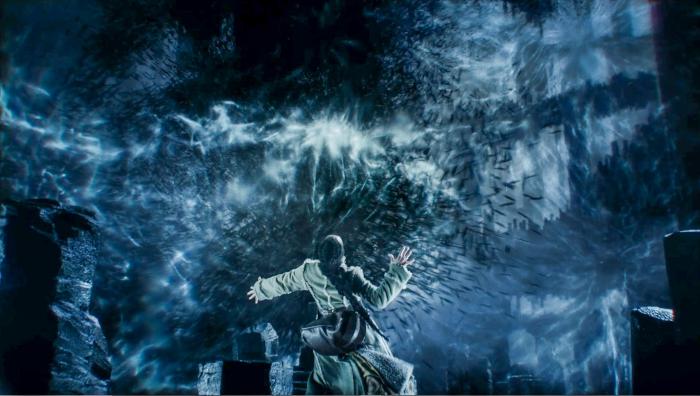 Once in the Shienaran city of Fal Dara, the party meets with Lord Agelmar Jagad (Thomas Chaanhing), Lord of the nation and one of the greatest battlefield generals alive. Despite Moiraine’s initially chilly reception, the Borderlanders make her and the others welcome. Agelmar, initially worried she’s there to take a hand in ruling the country, accepts her warning that the Trollocs are in the Ways and may attack from behind, rather than through Tarwin’s Gap as they historically do. At the same time, we see Padan Fain emerge from the Waystone in a much more leisurely manner than our party.

Lady Amalisa (Sandra Yi Sencindiver), Agelmar’s sister, tells Moiraine where to find Min Farshaw (Kae Alexander), a barmaid/seer with the ability to see snippets of some people’s futures. Though she can’t always tell what these visions mean, they always come true. She sees Perrin with yellow eyes, Rand holding a baby, and a white flame and gold ring for the young women. There are sparks surrounding them, fighting off a darkness trying to swallow them whole. And they’re all connected in a way Min doesn’t understand. She also sees that Moiraine will be brought low by the Amyrlin Seat, though she doesn’t know how. 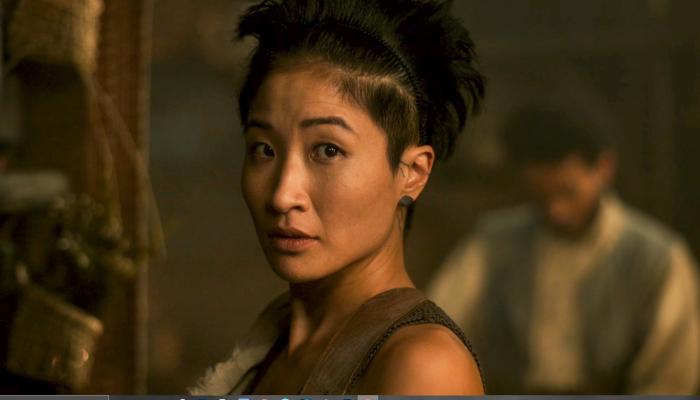 Rand and the others aren’t pleased to learn Moiraine believes 3 out of 4 of them will die at the Eye of the World, and tensions boil over. Moiraine tells them to choose their fate; to fight the Dark One or run and hide. Nynaeve’s distrust of Moiraine clouds her judgment, while Egwene’s blind faith in the Aes Sedai does the same. Rand is deeply upset at Egwene’s seeming indifference to Mat’s absence, but that’s nothing compared to how he feels when Nynaeve lets slip that Perrin is in love with Egwene.
After an uncomfortable conversation with Moiraine, Lan leaves to meet some old friends in the city. Nynaeve joins him after he catches her following him, and they share a good meal before going back to Lan’s room to, uh, relieve some stress. 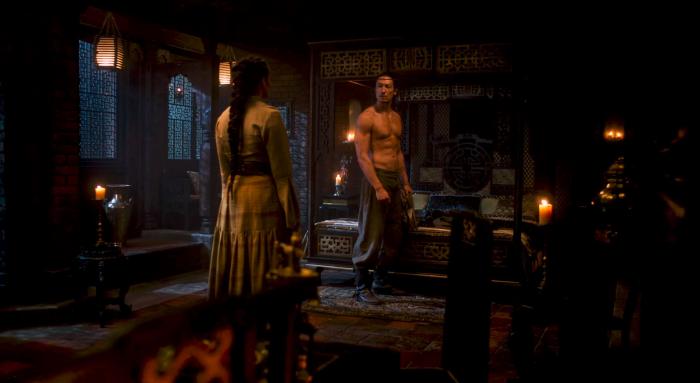 Rand practices with the bow, using the flame and the void technique he got from his father. Egwene confronts him for being a dick, and he admits he was but that she absolutely needs to become Aes Sedai. Later that night he shoots again, flashing back through everything that’s happened since Bel Tine, but with added context. Tam rambling to him about a dead mother and baby boy on Dragonmount. Rand smashing down an ironwood door far outside his weight class. Dragonmount itself stirred something inside him. And the journey in the Ways, when the Trolloc fell off the path and Machin Shin spoke to him, telling him what he already knew. He is the Dragon Reborn. So Rand and an increasingly haggard Moiraine leave their friends behind and head through the Blight to the Eye of the World, and the inevitable confrontation with the Dark One.

It’s clear from the beginning the writers had a lot of fun with traditional gender roles in this episode, in that they throw them entirely out the window. I could hear the distant wailing and gnashing of MRA teeth across the nation as an extremely pregnant Tigraine slaughtered half a dozen soldiers. She’d have probably won the entire battle herself had she not given birth. Imagine the guilt trips poor Rand would’ve suffered had she lived. “You ungrateful little brat, I killed 8 men with a wooden spear while crowning, and my doula was a filthy soldier! And you won’t even eat your mother’s special sheep’s kidney casserole?!” 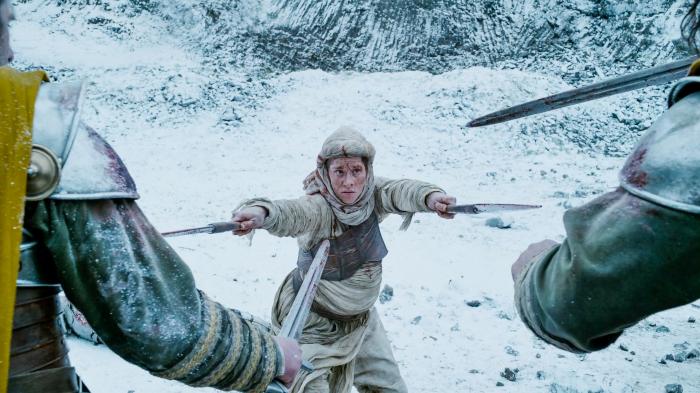 Then you’ve got Rand both acting like a typical portrayal of a spoiled teenage girl, and acknowledging that Egwene’s power practically demands she become Aes Sedai. He swears to become her Warder, and they move past the moment even though Rand already knows it’s a false hope. Add in Nynaeve’s pursuit of Lan across the city ending with her being the sexual aggressor and you’ve got a 180-degree turn from the norm.

So far it seems Rand remains the Dragon Reborn, despite the added potential of Egwene and Nynaeve. I do hope they remain faithful on that point, at least. The series makes it clear he could never succeed in his fated mission against the Dark One were it not for his companions, ta’veren and otherwise, which is the point of the sparks Min saw around the foursome. One issue with this season’s setup is that Rand’s felt like a side character. Apart from taking lead in his and Mat’s scenes, he’s been very much an addendum to Moiraine and Nynaeve’s story. It gave the eventual reveal less impact.

On the plus side, we finally meet Min! Kae Alexander seems a good fit for the character. She excels at Min’s direct manner, and I hope we see a lot more of her. Shienar’s design felt authentic to the tale, if somewhat generic. Many of the sets are so cramped it’s difficult to get a feel for where the group is in relation to everything else. I hope there’s a lot more to see in the Blight than closely-growing vines.

This season’s been hard to judge. Compressing about 1200 pages of novel into 8 episodes is a lot, and most of the blame for that rests squarely on Amazon. Had they lengthened the season even a few hours it would’ve made a big difference. Min and Thomm might have gotten the screentime they deserve. Our male characters might even have time to do more than mope. But it’s been a success, for the most part. The action scenes were decent, particularly the Bel Tine attack and Tigraine’s battle. When the story’s had time to develop, such as with Dana in Breen’s Spring and Moiraine in Tar Valon, it’s been really good. Here’s hoping this week’s finale can kick things into gear, and bring some disparate storylines together. 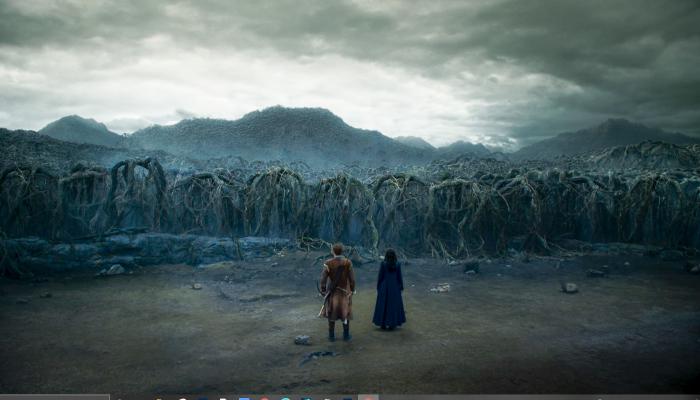 ← Is There Anything Worse Than Narrow Cave Diving? | Pajiba 10 FYC: Nicole Byer →