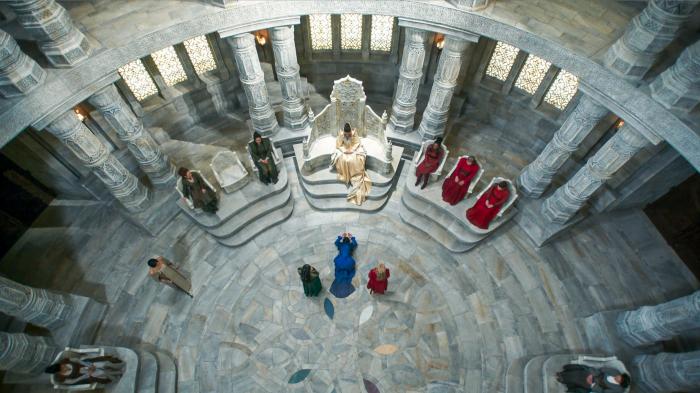 I’ll be honest with you; last week’s WoT is the first I didn’t love. The writers made a lot of changes and only some of them worked. But before I list my complaints, let’s talk about the episode. 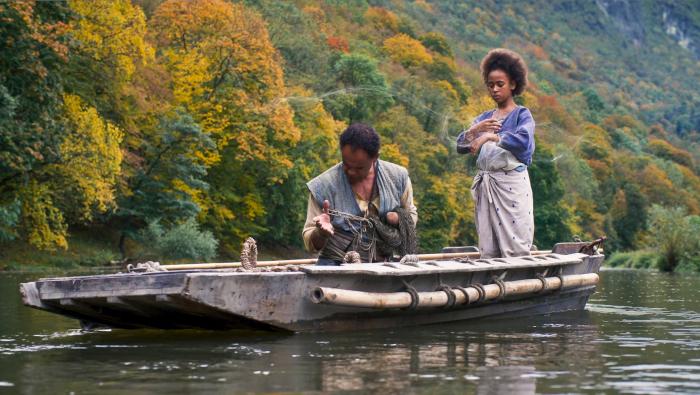 We open on a young Siuan Sanche fishing with her one-handed father in Tear, a powerful coastal nation with an intense distrust of channelers and Aes Sedai, as Siuan learns when they return home to find everything burned. After a few fishing-based aphorisms Siuan is sent on her own to travel half a continent to the White Tower.

We return to present day, and Liandrin’s, Alanna’s, and Moirainer’s audience with the Amyrlin Seat in the Hall of Sitters. Siuan, now a mature woman hardened into stone by a lifetime of struggle, dismisses the gentled false Dragon Logain’s attempts at suicide-by-Aes Sedai with contemptuous disregard before focusing her ire on the sisters who gentled him in the field against law and tradition. Liandrin justifies her actions by pointing out how many more Sisters would’ve died had they not. Alanna and Moiraine back her up, much to the Sitters’ consternation. A Red, Green, and Blue all on the same side are like Bernie Sanders, Ted Cruz, and Chuck Schumer all sharing a hot tub. Siuan is not happy with the excuses, Liandrin’s leadership, or Moiraine’s refusal to answer questions about her long journey. She threatens both Liandrin and Moiraine with serious repercussions, to be announced the following day. 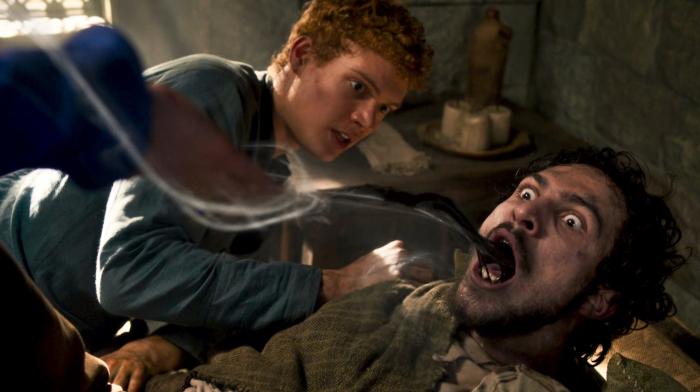 Moiraine’s agents have tracked down Rand and Mat at their inn. Rand foolishly tries to keep Mat out of Moiraine’s hands because he thinks Mat can channel; instead, Moiraine discovers the dagger from Shadar Logoth is slowly poisoning him. Only Mat’s ta’averen nature protected him this long from its effects. To say she is displeased with both the lads and Nynaeve, whose attempts to help Mat almost led to his death, is putting it mildly.

Moiraine meets with Blue Sitter Maigan in the public baths, where they speak of Siuan’s weakening grasp on the Aes Sedai and the Trollocs’ ability to appear unexpectedly in the Two Rivers. Maigan wants Moiraine to stay at the Tower to support Siuan, which is problematic given with the whole Dragon Reborn situation. Next, Egwene and Perrin are found. Perrin’s in rough shape after his torture at the Whitecloaks’ hands. Moiraine plays a little with the truth when she speaks with Ewgene, but is greatly relieved to receive her dead Sisters’ rings. Egwene tells her Valda is dead and of Perrin’s connections to the wolves, and neither of them know if it’s a sign about Perrin being the Dragon.

That evening we find Moiraine has received a message through the use of a painting on her wall, and the Aes Sedai uses a weave to make a door to… somewhere else. That place is Tel’aran’rhiod, the World of Dreams, a place that right now resembles Siuan’s childhood home in Tear. The Amyrlin Seat waits for her there, and it becomes clear the two public enemies are lovers in private, sharing a relationship and mission going back to when they were accepted, and a now-dead Aes Sedai spoke prophecy about the Dragon’s rebirth in their presence. Moiraine urges Siuan to banish her from the Tower to save that mission, and is convinced one of the five is the Dragon, Nynaeve being the latest and least likely possibility. It appears this is the first time Moiraine and Siuan have been together for years, and with her banishment it may be many years more before they are together again.

The next morning, back in the real world, Liandrin threatens to tell the Hall about Moiraine’s interest in the Two Rivers folk, leading Moiraine to cut Liandrin off at the knees with her own secret knowledge. Moiraine and Lan meet briefly with the Ogier Loial before bringing Egwene and Nynaeve to meet with the Amyrlin Seat. Nynaeve wants nothing to do with Siuan’s false praise and cuts to the chase; Siuan swiftly puts her in her place. Back in the Hall, Moiraine’s refusal to publicly speak of her mission gives Siuan a reason to Banish her from the Tower, an exile compelled by the Oath Rod, until she is summoned once more by the Amyrlin. Our party together once more they meet at the site of an old ruin that turns out to be a Waygate, an entrance to a parallel dimension allowing swift travel across the continent. As Moiraine channels open the Waygate the party moves through but is shocked to see Mat, freshly healed but still weak, refuse to join them. He stayed behind as the portal closes, leaving the group in utter blackness. 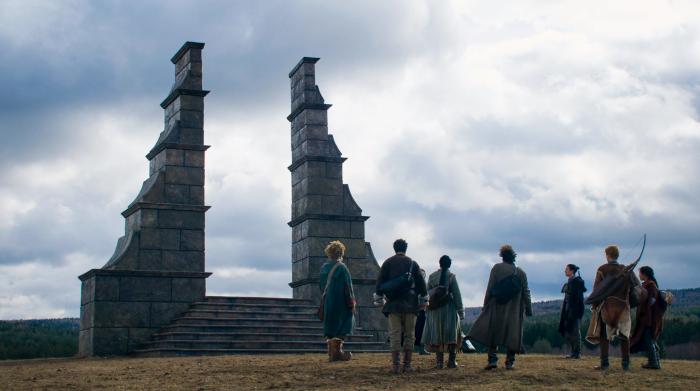 Whew. Where to begin? Let’s start with what worked, ie Sophie Okonedo as Siuan Sanche. The woman exudes presence and personal power and though Liandrin’s, Moiraine’s, and Alanna’s response to her displeasure felt a bit overwrought, it rang true in regards the books’ version of the Amyrlin Seat. Our small taste of the complexities of Tower politics felt true as well. Her relationship with Moiraine, though surprising, isn’t too far out of left field either. Jordan referred to the pair as “pillow friends” a time or two, the closest he could bring himself to describe a same-sex relationship. In the books we get the sense it’s all in the past, and the relationship’s sexual nature was left up to interpretation. Their hidden friendship and mission is faithful to the original series.

What’s not? Most of the rest. The Waygate is nothing like what’s described in the books, which were lovely stone walls covered in intricate carved vines and plants. Opening a Way merely required the removal and resetting of a particular leave rather than channeled power. Oaths, apart from the Three sworn by all Aes Sedai, were incredibly uncommon, and certainly would have been far too stiff a punishment for Moiraine’s alleged crimes. But Mat comes off worst in this new interpretation.

Barney Harris’s portrayal of Mat Cauthon has been contentious since the beginning. Always a flirt, trickster, and inveterate gambler, the Mat we meet in The Eye of the World is a cheerful young man, always smiling and ready with a joke. If anything he suffers from an abundance of self-confidence and swagger, and so when he finds the dagger in Shadar Logoth his sudden personality change is concerning, perhaps even alarming. It makes sense for Rand to wonder if Mat can channel, because the change is so profound. Instead, WoT has given us a Mat who starts out clinically depressed. Sure, he has his reasons; his parents have turned from a cheerful, loving couple into an alcoholic pair unable to care for their children. He’s so poor he barely has a pot to piss in, and this is a society where a pisspot is still a thing. So Mat turning into a suspicious, doleful bastard is hardly a stretch. Worse is Mat abandoning his friends as they approach the end of their journey. Mat’s many things, but a coward is not one of them. Perhaps this week we’ll find out it’s because he doesn’t trust himself near his friends, or is still compelled by the dagger; Moiraine certainly didn’t free him from it so easily in the original series. Perhaps he’s doing something noble. But it doesn’t look good. And although I don’t know why Donal Finn will take Barney Harris’s place next season, I sincerely hope he’ll be less of a sad sack when he arrives.

All in all, it was an episode big on exposition and light on forward momentum. The journey through the Ways and to the Eye of the World, where the Dark One is supposedly preparing for the Last Battle, should prove fraught with danger and stabbing, which is always a plus. With only two episodes left of this first season, expect things to pick up speed very quickly.


← Ah Yes, So THIS Is How 'Game of Thrones' Should Have Ended | 'Hawkeye' Recap: 'Ronin' a.k.a. The One Where Florence Pugh Shows Up With Her Love Of Macaroni And Cheese Covered In Hot Sauce →