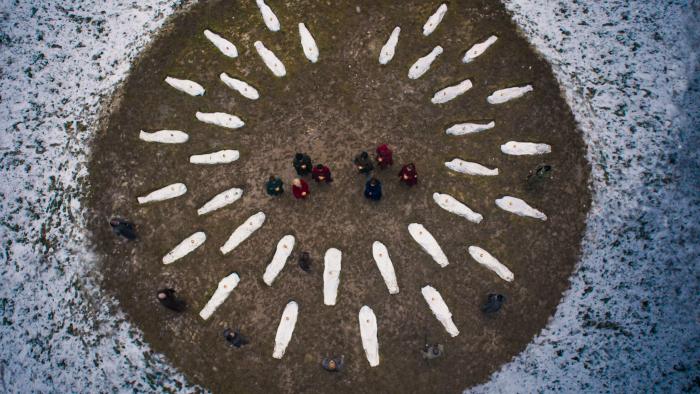 'The Wheel of Time' Book Reader Recap Ep. 5: All in White

The Wheel of Time’s fifth episode, “Blood Calls Blood,” sees our various parties reach Tar Valon territory, and most of them in the city proper. After stopping to bury the dead, including the former King of Ghealdan and Kerene of the Green Sedai, Nynaeve and the rest of the Tar Valon group reach the city after a month’s travel to both the joy and consternation of the public. Joy at the successful capture of Logain, the false Dragon. Consternation and sadness at the death of an Aes Sedai sister, a powerful resource already in short supply. Kerene’s Warder Stepin is in bad shape, barely aware of what’s happening around him as he leads Kerene’s horse back to its stables. Lan and Moiraine, wracked by grief for their lost and empty friends, cling to one another in hope of solace. Nynaeve’s newfound gift, an ability to channel that dwarfs any seen by the Tower in a millennium or more, has her shocked and unsure about her place in the world. Moiraine offers what solace she can, and the two find an accord for the first time. 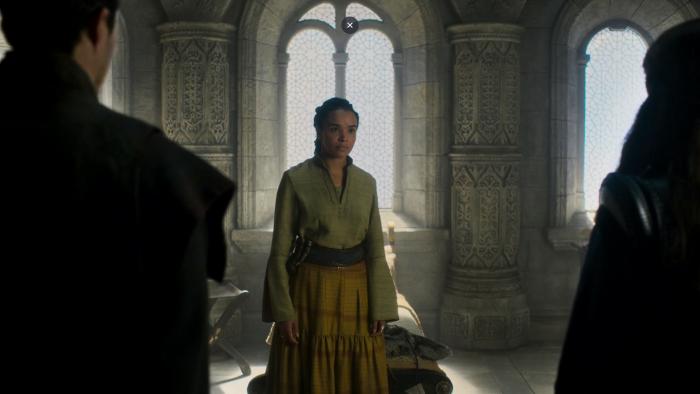 Rand and Mat have also arrived are staying at an inn run by a friend of Thom’s. Mat is in bad shape, with sunken eyes, pale skin, and a suspicious attitude that has him lashing out at random strangers, even children. He is deeply afraid he killed the Grimwells, no matter what Rand says about a Fade, and withdraws within himself. Rand is more certain than ever his friend can channel and doesn’t know what to do, but he’s convinced he must keep Mat from the sisters. The one bright spot is Loial, the massive Ogier staying at the same inn. Ogier are an intelligent, long-lived, humanoid species vaguely similar in stature to a Trolloc, and rarely seen outside their steddings. Loial is talkative, friendly, and mildly offensive every time he talks about humans. He is convinced Rand is an Aielman, whatever the boy says. The two humans arrive in time to see Logain paraded through the streets as citizens throw rotting vegetables his way. Logain sees the pair as well, and it’s the only thing to break through his fugue. He laughs and laughs, seeming to look at Mat the entire time. Mat begs Rand to make sure he never ends up like Logain, and promises Rand the same. 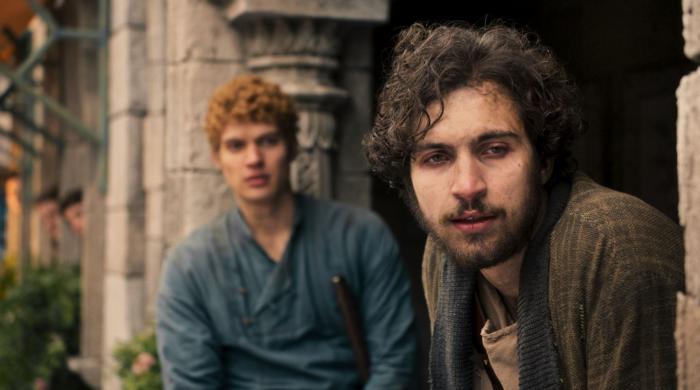 Egwene and Perrin’s peaceful trek with the Tuatha’an comes to a frightening end as the group is confronted by the same party of Whitecloak Questioners seen in episode 2. Eamon Valda is as good as his word and immediately recognizes the Two Rivers folk and demands their arrest. In a chilling scene reminiscent of so many real-life events in the past 5 years, the Whitecloaks crush the Tinkers’ courageous, peaceful, and ultimately futile resistance and capture the pair. Egwene is scrubbed and checked for Dark marks with a clinical detachment more dehumanizing than any lewd interest could be. Valda is convinced of their connection to the Dark, and more specifically Egwene’s ability to channel. He offers the same justification for Perrin’s torture that every religious and political fanatic has offered since time immemorial. His faith says it must be so, and who is he to argue? The sadist offers Egwene a choice; demonstrate her channeling and die while Perrin lives, or remain silent and survive only to watch Perrin die. Perrin, devastated by his accidental killing of Laila, confesses what happened and begs Egwene to take the deal. It’s all he deserves. Egwene refuses and, as Perrin screams and wolves howl, burns away Perrin’s bonds. Perrin breaks free as the wolves attack and Valda is terrified to see his eyes burn amber. Egwene stabs him above the collarbone but doesn’t stick around long enough to finish the job. She snatches the Aes Sedai rings Valda kept as trophies and she and Perrin flee while the wolves savage the Whitecloaks - a scene that made me burst into applause. 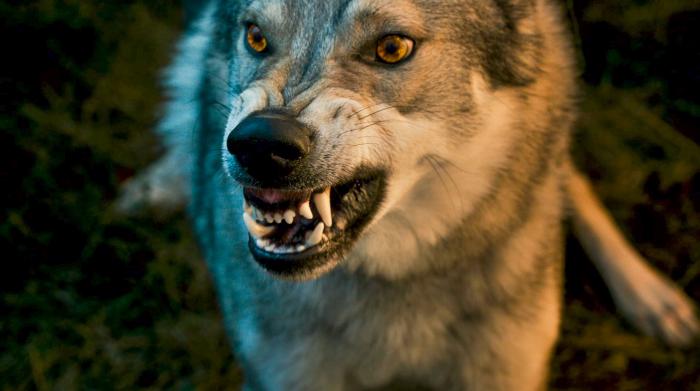 Lan, Ivhon, and Maksim prepare Stepin for the ceremonial return of Kerene’s ring to the molten gold from which all the Aes Sedai rings are made. They gently push their devastated friend to accept Alanna’s bond, as it’s the only thing that may allow him to move past the pain. But Stepin is unwilling to let go of his sorrow just yet, as he tells Nynaeve when he asks her for more sleeping herbs. Kerene saved his life and soul a long time ago, and they still belong to her. All the Warders in the Tower grieve with Stepin as he says goodbye. 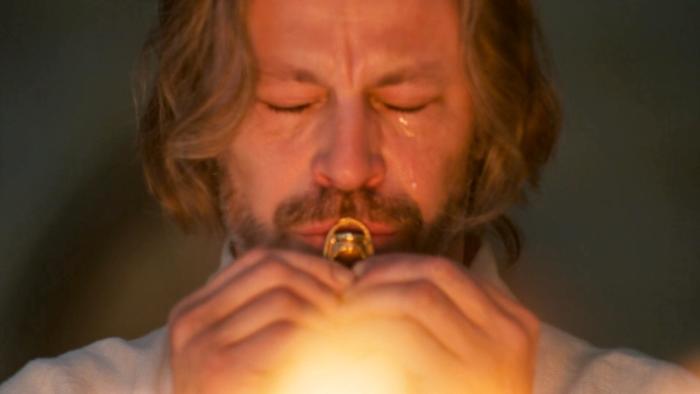 Liandrin tries to convince Nynaeve that the Red Ajah is for her, and encourages her to explore the Tower grounds. In a jarring cut that makes little sense, Loial brings Nynaeve to the inn where Rand and Mat are staying. The three are thrilled to see one another, but Nynaeve is deeply concerned for Mat’s health. She agrees they should keep him from the sisters for as long as possible, and promises to do what she can to heal him.

Liandrin tells Moiraine that Nynaeve belongs with the Red Ajah, and subtly threatens her with the reminder that so long as Moiraine is out of the Tower, she holds no sway about what happens inside it. Later, Moiraine and Alanna discuss Stepin’s grief and what might be done about it, as well as Alanna’s concern that her old friend’s secrets are eating her alive. The Amyrlin Seat is returning to Tar Valon, and apparently holds no love for Moiraine. Lan promises to stay the night with Stepin and the two share a conversation like old times. Stepin gently ribs his friend about Nynaeve, seemingly at peace with the concept of bonding to Alanna, and the two share tea. Lan wakes in the morning with a brutal hangover and finds Stepin has disappeared with a knife. He races through the corridors too late, and discovers Stepin dead by his own hand at the foot of a statue celebrating the Warders’ devotion to their Aes Sedai. The Warders and the Aes Sedai closest to Stepin and Lan hold a ceremony for their dead friend. Dressed all in white they salute his sacrifice, and grieve for their loss. Moiraine, normally impassive in public, weeps for her friend’s loss and joins in with a fury. Lan screams. 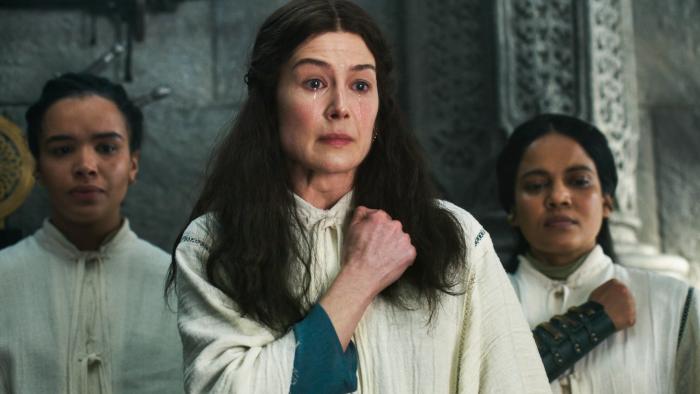 We have at this point left the original text so far behind that it’s hardly worth discussing, and it’s just as well. Thank the Light for the “One Month Later” time cut, because we’ve left behind the boring walk in favor of character development. No one actually makes it to Tar Valon in The Eye of the World; rather the party reconnects in Camelyn, the capital city of Andor. That’s where we first meet Loial. I’m not sure how I feel about the character design. I appreciate the practical effects but he looks more cheesy than I hoped he would. Hopefully I’ll get used to it. 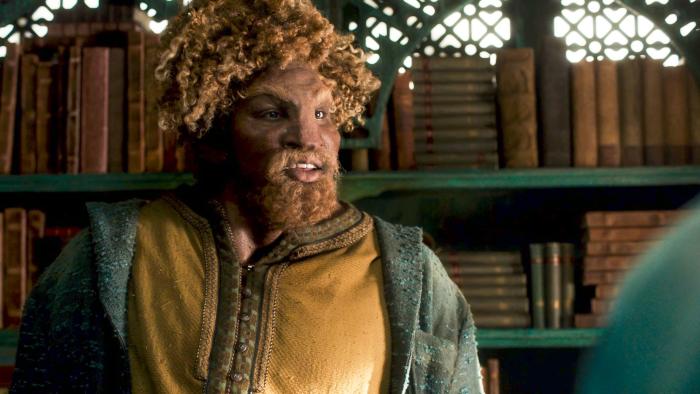 TEOtW also introduced Queen Morgase, Princess Elayne Trakand, her blood brother Gawyn and adoptive brother Galad. It’s also the first time we meet Liandrin. Perrin and Egwene are originally rescued not only by wolves, but by Moiraine, Lan, and Nynaeve and brought to Camelyn where they meet Rand and Mat. It makes sense to skip this bit for now, since the show is working with a compressed timeline. Rather we get a powerful exploration of grief, belief, and masculinity as the Warders and Whitecloaks show their true colors in very distinct ways. 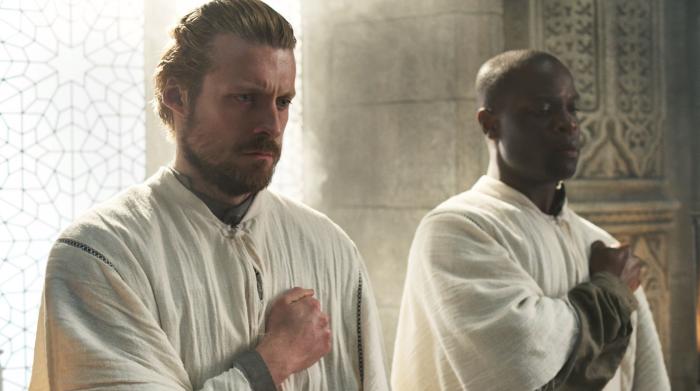 The Whitecloaks will be discussed in more detail in an upcoming piece, but their cruelty, misogyny, and religious fervor are on full display here in a way the books glossed over. Not only more dangerous than originally described, but the Whitecloaks’ brutality is also on full display as they crush an entirely peaceful protest to get their hands on a pair of youngsters who’ve done nothing wrong. The real-world parallels are too strong to be denied, but I admit there’s something very uncomfortable in watching Abdul Salis strike Maria Doyle Kennedy. I admire the show’s commitment to diverse casting but the visual of a Black authority figure leading the abuse of mostly lighter-skinned protesters may be a little problematic in today’s environment. That said, the thin veneer of Valda’s mild, clinical detachment over his sadistic satisfaction for torture is extremely well done. And it’s all stripped away the moment he’s faced with something unknown and dangerous, in this case Perrin. Valda is emblematic of the Whitecloak rot; self-important zealots with big swords and cowards’ hearts. Women can only be the enemy because any one of them could be a Tar Valon “witch” or one of their spies. They embody a traditional view of masculinity, one which abhors any outward display of weakness or femininity. 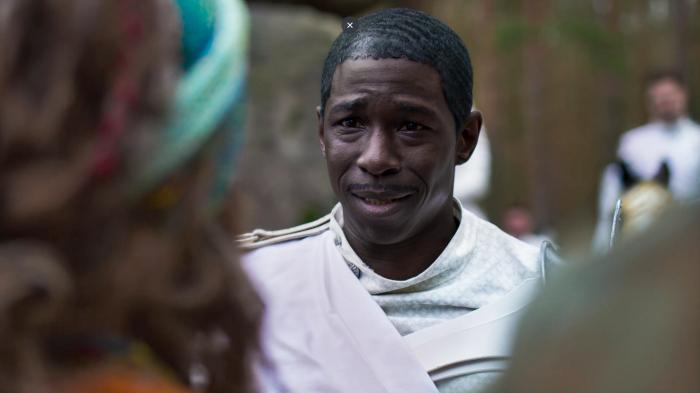 The Warders, by comparison, are considerably different. Like the Whitecloaks, they are well-trained and well-armed, though more warrior than soldier. One-on-one they are more than a match for any Whitecloak or Trolloc. More than that, though, is the difference in attitude. We never see a Whitecloak touch another person without abuse. The Warders frequently touch both their charges and one another. Even hetero Warders like Stepin and (presumably) Lan are straight but not narrow, accepting of one another’s sexuality and feelings. The Tar Valon folk are remarkably comfortable with physical intimacy. The Whitecloaks are stolid, humorless, rigid in their creepy little mustaches and white garb like ivory statues. I don’t recall any of the show’s funerary customs in the books, apart from Moiraine’s “The last embrace of the Mother welcome you home” line. But here the Warders and Aes Sedai dress in white to say goodbye. It is a softer white and less aggressive garb. They’re more open with their emotions than in the books, at least in private. Stepin’s numb grief comes from the snapped bond, which carries all the emotional loss of a lover, parent, or child, as well the absence of physical connection that is to them equivalent to the sudden loss of a limb. His fellow Warders mourn with him. They touch Stepin frequently to remind him of the connections he still shares. They do not try to mollify his grief or brush it aside. They treat him with all the care and empathy of men who understand and fear what he’s going through. It waits for all of them, should they fail in the duty to protect their Aes Sedai. Maksim and Lan openly weep, while the grief on Ivhon’s face is just as palpable. Moiraine, overwhelmed with Lan’s emotions as well as her own, fears Lan’s inevitable fate should she fall. After growing up in a stereotypical rural New England home, where male physical affection was nonexistent by the time I was 6 and any vulnerability or softer emotion was hidden, it all feels very alien but admirable. 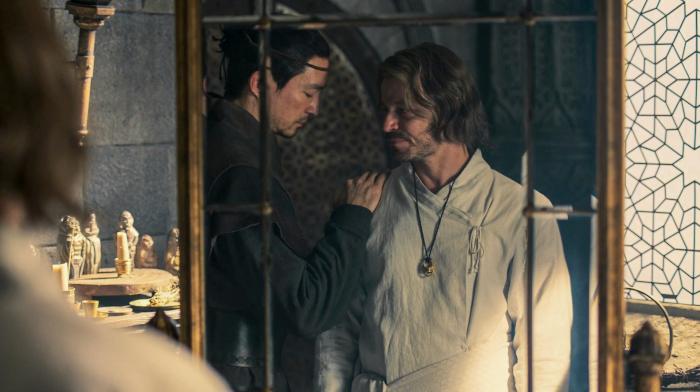 One final note: Are these stones simple boundary markers, or are they Waystones? The way each party comes across them during the episode makes me think the former is true, but I’m dying to know. 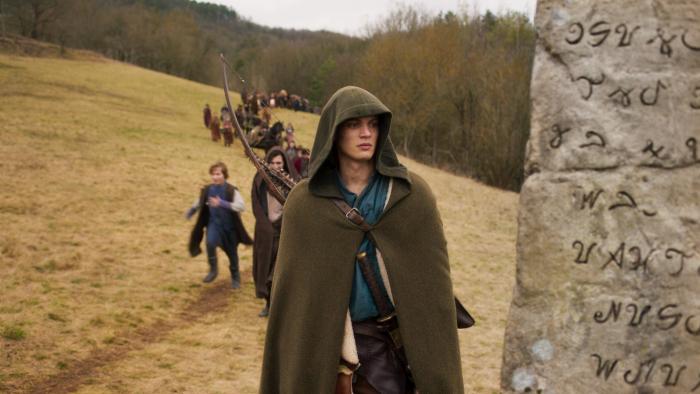