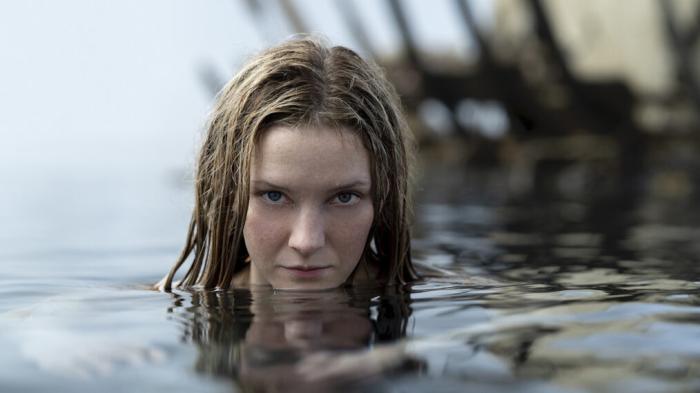 'The Rings of Power' Is Improved, but It Still Has Issues

Never listen to me. If I predict lightning in a thunderstorm, assume skies will clear in the next 5 minutes. Don’t invite me to watch a game with you unless you really, really want your team to lose. When it comes to seeing the future, my vision’s about as good as Matt Murdock’s. So my every guess about Sauron’s true identity was wrong. Oh well! The season finale of The Rings of Power was pretty good anyway, and covered quite a bit of ground.

First off, someone pointed out I’ve been misgendering the Dweller, and they’re right. The character is played by a woman — Bridie Sisson, wonderfully ominous in every scene — but until I saw the character in profile this episode they seemed gender neutral enough that I was tricked. I was convinced they were Sauron, because they were creepy and ethereal and who expects Sauron to be some human dude? Not this guy! But I was wrong, as the finale was kind enough to point out in the first 4 minutes when the Dweller and her compatriots — the Nomad (Edith Poor) and the Ascetic (Kali Kopae) — kneel to the Stranger and name him Sauron. Dammit. In my defense, I am an idiot.

Elrond and Celebrimbor are discussing the Elves’ inevitable downfall when Galadriel and Halbrand arrive after 6 days of hard travel. Halbrand is near death, and the healers get straight to work while Galadriel and Elrond swap stories. Recovering quickly, Halbrand soon meets Celebrimbor for the first time, and the two smiths have a meeting of the minds that ends with Halbrand suggesting the mithril be combined with other elements to harness its properties. The suggestion is “a gift,” he tells Celebrimbor, and the next sound you hear is the distant echo of thousands of Tolkien fans smarter than me screaming “I told you so!” in unison. Probably in Elvish, the nerds. It’s certainly enough to raise Galadriel’s suspicions, particularly when Celebrimbor unwittingly uses Adar’s words about the power of the Unseen World over flesh. High King Gil-Galad is unconvinced and wary of Celebrimbor’s suggestion the mithril be made into a crown. When Galadriel presses Celebrimbor on where he heard those words, he seems confused, and it’s enough that Galadriel sends a fellow Elf into the archives to find evidence of Halbrand’s lineage.

But before we discover where Halbrand comes from — or why his accent is so inconsistent — the Dweller and the others tell the Stranger he should travel to Rhûn, where he will learn who and what he is. It almost works, until his growing powers force them to knock him out. But when the Harfoots attempt a rescue, the Stranger remembers who his true friends are. One magical battle later, the trio realize they’ve bitten more off than they can chew and make their escape, but not before the Stranger reveals their true forms and Sadoc is mortally wounded. They know now the Stranger isn’t Sauron; he’s “the other one,” who we know now is almost certainly Gandalf. He decides he must head to Rhûn and, after some painful goodbyes, Nori joins him on the quest.

Elendil’s daughter Eärien is one of the few apprentices granted an opportunity to draft a glorious statue to King Tar-Palantir before his death. He believes her to be his daughter Míriel and bids her to look into the palantír that shows Númenor’s demise. We don’t know what’s happened to her before the remainder of the fleet makes landfall to find black banners waving over the city; the King is dead.

Halbrand continues to make himself invaluable to Celebrimbor, deepening Galadriel’s suspicions. They’re confirmed when she received evidence he’s not heir to the Southlands after all and Halbrand quickly admits the truth. He is the Dark Lord in disguise, and it was Galadriel herself that saved him and convinced him to continue his quest to “save” Middle-Earth through domination. Halbrand tries to convince Galadriel to join him, using illusion and her own words against her, but Galadriel remains strong and is brought back to herself thanks to Elrond. Working with Celebrimbor, they craft 3 rings to maintain a balance of powers. As they finish, Sauron arrives on the outskirts of Mordor, his eyes firmly set on Mount Doom and the power that waits there.

Yes, yes; Halbrand is Sauron. You were right and I was wrong. Are you happy now?! In my defense, I thought Sauron’s contempt for the “low men,” as Gil-Galad called him, would keep him from disguising himself as a normal human. I also thought the Elves’ prejudice against other races and the men who once served Sauron in particular would also be factors. But the writers decided otherwise, and that’s fine. I’m not married to canon. I do think Galadriel’s unearthing of a single, thousand-year-old parchment is a terrible reason to cast off your disguise.

The former King may have died without official heirs, but show me a king who kept his junk in his britches and I’ll show you one with an exceedingly effective police force. Celibate or monogamous kings aren’t a thing. If anything, His Expired Highness probably has a hundred living descendants after a millennium of breeding. It’s very Evil Overlord to confess the first time someone accuses him of being Sauron. I’ll be honest; when they showed us Galadriel’s strange little smile during the forging scene, while Elrond was running up with the parchment he found, I wondered if Sauron had somehow taken her form as well. It didn’t happen, as we saw Halbrand approaching Mordor, but I do wonder if these rings will have a corrupting effect once the One Ring is forged. She, Celebrimbor, and Elrond seem entranced by the potential in the newly formed rings. Canonically, the Elves’ rings were safe in themselves. Because Sauron didn’t have a direct hand in their creation he couldn’t control or corrupt their possessors until\unless he had the One Ring. I also wonder how long it’ll be before Galadriel thinks to tell the Southlanders that the King she brought them is actually their ancient oppressor. It feels like relevant information.

But at least we’ve got some movement on the Stranger’s storyline. Probably Gandalf, maybe Saruman or one of the Blue Wizards, I’m excited to see what happens next season when he travels to Rhûn and possibly meets the rest of the Istari. He wasn’t the only one to fall from the sky, and it’ll be interesting to see some of the characters Tolkien never focused on. The battle with Sauron’s servants was interesting, with a bigger focus on spectacle than Peter Jackson’s LotR version or the original provided. Wizards are subtle and not prone to outbursts of power. I did appreciate how the series remained faithful to the wizards’ need to use a magical focus for control, as the Dweller’s use and loss of her staff demonstrated, as well as the Stranger’s improved control once it was in his hands. I’m dying to know more about the undead servants; necromancy isn’t unheard of Middle-Earth, but was mostly limited to the Nazgul and Army of the Dead. It does feel like everyone gave up on saving Sadoc too easily, given the presence of the world’s most powerful wizards. I assume we’ll continue following Poppy and the Harfoots as well as Nori and the Stranger, and possibly see the beginning of Hobbit culture. I’m not surprised we didn’t get a Dwarf vs. Balrog scene, given the major battle in “Udûn.” But I was bummed we didn’t check in with Durin and Disa one last time. I’m curious how that power struggle will work out.

The season improved significantly as it moved away from the prologue vibe of the first episodes and characters were given room to blossom. There are still issues. Galadriel remained one-note (angry) through most of the season. The writers’ obsession with including at least one solemn quote that doesn’t really mean anything in every conversation remind me of Emil Blonsky’s nonsensical platitudes and haikus. I get they’re trying to elevate the series to Tolkien’s original vision of high fantasy, but it’s possible to have a conversation without portentous consequences. The Númenoreans remain a weak link in the story, though I expect the power struggle between Chancellor Pharazôn and Míriel to change that next time around. But the cast is great, the production values are top tier, and there’s so much material to work with.

Production on season 2 has just begun, and we won’t see any new episodes before 2024. Here’s hoping filming isn’t halted by another pandemic. I’m glad I stuck with the series; It went from a slog to one of the year’s best, and I’m only disappointed the season was so short. I The Rings of Power exceeded my expectations and I can’t wait for more.