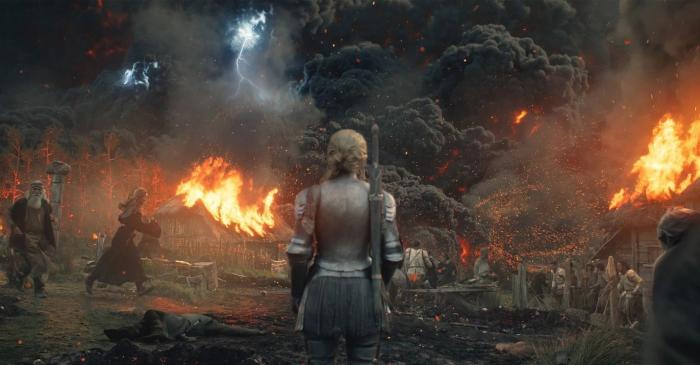 Everything Burns: 'The Rings of Power' and the Connecting Thread of Fire

Fire devastates. It consumes. It destroys food, livestock, homes, people. We have, until now, seen the beauty of Middle-Earth. Forests, fields, mountains, even the Dwarven caves. That changed with the eruption of what is now Mount Doom, and The Rings of Power are unflinching when it comes to showing the ramifications of this devastation.

It rips off the bandaid right away as it shows a flaming horse, mad with fear and pain, galloping past Galadriel through the remnants of the village. It is utterly destroyed and many are injured or dead. Our main characters survive, of course, with the exception of Ontamo. Isildur and Valandil free Queen Regent Míriel, though not without cost. Galadriel finds Theo and manages to avoid Uruk patrols by skill and luck, until they locate the remaining peasants and Númenorean soldiers. Míriel’s been blinded by the eruption, but is determined to return to Númenor, raise an army, and return to fight the Uruk hordes. Galadriel believes her, but I doubt Chancellor Pharazôn intends to make it as simple as that. Elendil, formerly very pro-intervention, fears the worst for Isildur and resents Míriel’s intention to continue forward.

The peasants are now refugees and head with the remaining soldiers to an abandoned fort once held by Númenor back in the day. Theo and Bronwyn are going with them, Theo having finally gotten over his xenophobia when it comes to the Elves. He even hugs Arondir! Unfortunately, their new King Halbrand is badly injured and in need of Elven medical care. It’s like going to Canada for treatment because your insurance sucks.

Meanwhile, the Harfoots are dealing with fires of their own. Debris from Mt. Doom has burned away the fruit trees they depend on during this leg of their endless journey. The Stranger brings them back, but not without a falling branch that nearly crushes Nori’s little sister Dilly. It convinces the Harfoots that it’s time to say goodbye to the Stranger. Daniel Weyman is killing it as the Stranger; he’s as intense a character as Adar, without the benefit of coherent speech to back up his expressions. He leaves, and the next day the Harfoots wake to discover the grove regrown, healthy trees brimming with ripe fruit. They’ve just realized their error when the Dweller arrives with his strange, nearly colorless companions. Their hunt for the Stranger continues and when Nori tries to lead them astray they burn all the Harfoots’ wagons, either in retaliation or because they wanted to. They are disheartened but Largo reminds them that they always stick together and continue walking. Nori and Poppy decide to find the Stranger and warn him of what’s coming; soon Goldie and even Sadoc are going with them, thanks to Malva of all people. Put a lump in my throat, it did. And off they go.

Durin IV and wife Disa are determined to help the Elves, particularly Elrond. Durin III is just as determined to ensure the Dwarves leave the mithril right where it is, fearing a collapse of their mountain. Disa is furious and Durin IV grieves for their friend, but Elrond accepts the decision and leaves. But when they see mithril clear the black corruption from the Lindon leaf brought back to Khazad-dûm they can remain obedient to the King no longer. Elrond and Durin look for the main mithril seam and soon discover it, but are just as quickly discovered and arrested by royal guards. Elrond sees his hopes for saving his people dashed as he’s banished from the city; Durin insists the mithril can be mined safely, but is cast aside by his father and removed from his station, a Prince no longer. Disa comforts her husband and tells him that he will one day rule their kingdom, with her by his side, and together they will carve the mithril from the mountain’s bones. Unfortunately, Durin III throws the now clean Lindon leaf down into the hole carved by his son, and it’s this leaf that wakes the Balrog trapped there for who knows how long.

The connecting thread of fire that ties together the disparate storylines of this penultimate episode lays out in stark terms the stakes of this particular battle. Adar and his Uruk have devastated the landscape, condemning the plants and animals to slow death and forcing the Men to flee. We know they won’t be satisfied with their prize; they’ll continue to ravage what remains until it’s all gone. Fire is rarely shown as anything other than a destroyer in this series anywhere but Khazad-dûm. There’s no sitting around a campfire, taking hot meals at the end of a day’s journey. All it does is destroy. Even Bronwyn and her people use it against the Orcs as much as it’s used by them. It’s ended the Southlands. Destroyed the Harfoots’ wagons. The Balrog’s fires will soon threaten Khazad-dûm. Tolkein’s original stories use it in a very similar way. Smaug’s dragon-fire. The bonfires and forges of Saruman’s Uruk-hai. And of course, the fires of Mount Doom that allow Sauron to craft the One Ring, and eventually destroy it. The Dweller’s mastery over it adds to my suspicions he’s actually Sauron in disguise. Perhaps this is his Annatar form. Or maybe that’s yet to be revealed. Either way I’ll remain convinced they’re Sauron unless the finale proves me wrong, and probably beyond.

Less clear is Adar’s goals now that he’s removed the threat of sunlight from his horde. Part of me believes he believes he killed Sauron; he seems honest about giving his children a home, and hating Sauron’s torture and enslavement of the race he created. But I have to believe the plan to ignite Mount Doom was Sauron’s originally. Did Adar bring it to fruition out of loyalty to his Orcs, or was it under Sauron’s direct orders? Hopefully, we find out soon.

Disa’s ambition was a bit of a surprise. Here’s hoping the writers don’t take her down a Lady Macbeth route and make her the scapegoat for Khazad-dûm’s inevitable downfall, because her fierceness is a treasure. I love everything about her and her husband. Durin III is right about Khazad-dûm’s inevitable fate, though neither Durin IV or Disa are wrong about the hesitancy and conservatism of the III’s advancing years. He’d rather not entertain the notion of saving the Elves at all than risk any harm to his people. Ironic, then, that it was his thoughtless decision to toss the Lindon leaf into the pit that may damn them all to death at the Balrog’s hands. While we’re on the subject, raise a glass to Peter Mullan, one of the best character actors out there doing his thing. His voice was driving me mad until I gave in and looked up who was in the role; he’s been a favorite of mine since he was in Braveheart all those years back. Honestly, the whole show is so well-cast I can’t even think of who I might have changed up.

The Harfoots redeemed themselves this time around. Like the fire that devastated the trees around them, the Stranger’s magic is not without risk. But that doesn’t make it bad, and even Malva recognizes that now. Is the loss of their wagons what finally drives the Harfoots to settle down and eventually become the Hobbits we know and love? Timelines are so fuzzy in this series so it’s difficult to tell.

With only the series finale remaining, so much remains up in the air. If there’s one thing we can be sure of it’s that we won’t understand much more tomorrow night than we know now. I imagine Amazon has one hell of a cliffhanger prepared to keep us all primed for next season. The bastards. If I hadn’t grown to enjoy the show so much I’d resent them for it. But the show’s improved greatly since its first two episodes, and now I’m left hoping they stick the landing. We’ll find out soon enough!


← 'Through the Fire and Flames' On 'Trombone Champ' is What I Imagine Going Mad is Like | Bring Back the List Show! →