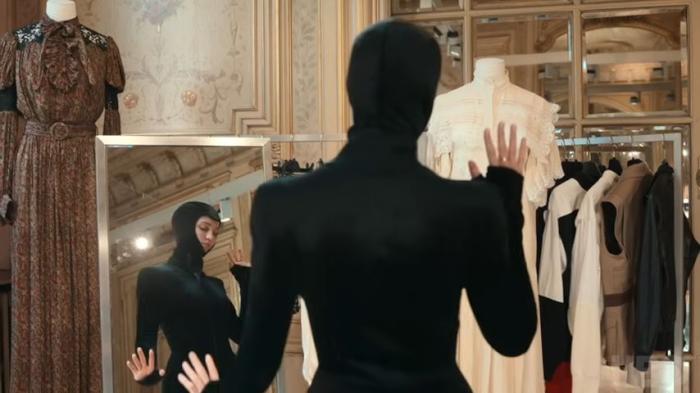 The Post-Mortem of 'Irma Vep'

If this is the first you’re hearing of Irma Vep, it’s probably best to begin at the beginning. Come back when you’re done.

Here there be spoilers…and this is a show that’s too good to spoil.

In what amounts to a seven-hour Oliver Assayas film, Irma Vep expands on the rich vision of his 1996 movie, building extravagantly on the foundation of the canonically unfinished original. And it does that by fourth-wall-breaking in ways I never saw coming.

Given how meta the show is by its nature, the twisty dissolutions between fiction and reality were inevitable. But Assayas took the breaks a step farther than I ever expected. Irma Vep is a spirit of chaotic, wicked pleasure, an evil muse: she can do anything and be anywhere she wills herself to be. That freedom becomes Mira’s (Alicia Vikander) secret world, a private playpen where the barriers of her real-life relationships break down. Suddenly, she can slip into anyone’s life and steal their secrets as well as their jewels. Irma slides through the ceiling and the walls in literal fourth-and-fifth wall-breaking visuals—a twist that should feel fantastic and sci-fi-ish, but in the show’s stoic delivery feel profoundly natural.

Irma Vep as a character—or a spirit—becomes something vaster and more intense than a franchise character. It’s worth noting that for a chunk of the series, Mira’s agent Zelda (Carrie Brownstein) is pushing her to step into the role of the Silver Surfer, another recurring movie character whose mantle Mira would take up from where it had been left off by someone else. Mira soundly rejects the idea: there’s a world of difference between becoming Irma and becoming yet another recycled superhero. Irma becomes a symbol of true cinema, the incarnation of a creative spirit gleefully transcending centuries and transforming the people she touches by bringing them to the brinks of their reality…and then abandoning them when the movie fades and the lights come on.

Assayas isn’t setting out to make a treatise of high-art cinema vs. low-art superhero flicks. Both are presented as staggeringly soulless and commercial or as pervasive and moving in their own rights. Turns out, the show-within-the-show Irma Vep is basically an extended ploy to convince Mira to sell a designer perfume. René Vidal’s (Vincent Macaigne) “pure” artistry is no more removed from the money-making machine than the Silver Surfer.

I was very happy to see that early in the series/film/serial/whatever, Assayas addresses the whitewashing concerns that many viewers commented on when the project was announced—namely, that the central character of Maggie, played by Maggie Cheung in 1996, was a woman of color, and she’s now replaced by Alicia Vikander, a white actress, as Mira.

Vidal—a transparent stand-in for Assayas himself—cracks apart in therapy when confronted with this specific question about his casting choice. His voice becomes very small as he asks how he could cast a woman that reminds him of his ex-wife, a heartsick confession of still being haunted by his love for Maggie (codenamed ‘Jade Lee’ in the series) and by the failure of that love to hold together their marriage. He does cast a Hong Kong actress, Cynthia Keng (Julliard-trained Fala Chen, incidentally best known for her Marvel debut in Shang-Chi last year, speaking of the absurd art-versus-superhero-cinema debate) in a smaller role in this rendition of Irma Vep. Vidal straight-out tells Cynthia near the end of the shoot that he was thinking of Jade when he cast her. Cynthia says frankly that she’s no Jade Lee—and that if he’s looking for a surrogate for what Irma Vep meant to him, that person is Mira.

The casting choice also makes sense to me on another level, having watched the series through to its conclusion. Maggie as a character was an absolute outsider, a Hong Kong action star cast against the arch-Frenchness that the 1996 version repeatedly associated with the notorious figure of Irma Vep. Maggie was repeatedly said to speak no French—though that’s more of a perception/assumption by those around her than actual fact. She’s framed as always looking in, even when she’s the heart of the production, the embodiment for Irma Vep.

Vikander’s Mira, on the other hand, is an international A-lister who slithers easily into any situation and makes it her own, with a casual command of languages and an unflappable cool. She’s a bit of an anti-Maggie—and taken in context with the privilege of her whiteness and with Vidal’s therapy monologue, the reversal feels pointed, as if within the narrative Assayas/Vidal is seeking out someone as un-similar to his ex-wife as he can—someone who will access the spirit of Irma Vep via a very different kind of magic. This reimagined actress seemingly can open any door she wants to, the magnetic center of any room she’s in by virtue of her fame or her allure.

I won’t pretend there aren’t some overtones of 8 ½ at play here: the male director tumbling between the influence of various female muses, struggling to come to an understanding of his own artistic vision. But there’s a clever reversal at work: Vidal becomes the vessel for Mira’s evolution, rather than vice versa. He’s back where he started at the conclusion, albeit with a greater emotional sense of himself. It’s Mira who steps into the carnival of the mind, blending into the creative spirit and embracing the artistry she’s longed for in her craft and had feared that she lost.

The surprisingly gentle but powerful conclusion is that the spirit Mira has been inhabited by/inhabiting does not fade at the end of her pseudo-possession. Either Mira doesn’t need Irma, or Irma doesn’t need Mira anymore. We’re left with Irma (still in her guise as Mira) perched over the iconic Paris skyline in her trademark catsuit. Mira is elsewhere, off in her next role, her next world. The spirit is waiting for her next incarnation.