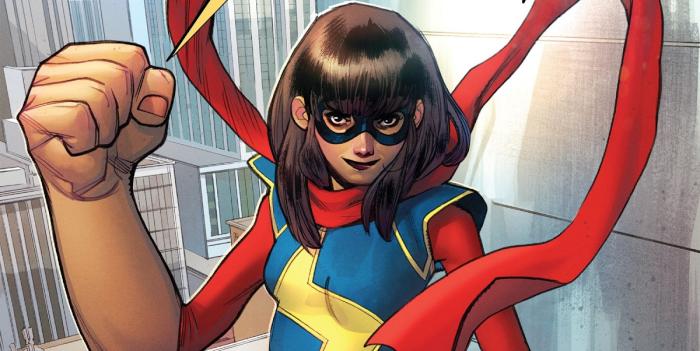 The Picture Used for 'Ms. Marvel' Casting News Brought Up Issues of Colorism

The future of Marvel is here! Iman Vellani has been cast to play Ms. Marvel — a Pakistani-American teenager and the first Muslim character to lead a comic book series — in the Disney+ show of the same name. Not only has Vellani nabbed a starring role, but she is reportedly set to appear in future MCU films as well. Yes, bring it on! Ms. Marvel is popular and beloved by many, and the pressure was on for Marvel to cast a Brown actress in the role. We all know the studio’s track record when it comes to hiring actors of color, which is to say it was previously (and is still mostly) abysmal. However, Ms. Marvel isn’t just hiring POC talent in front of the camera, but the series has also Adil El Arbi and Bilall Fallah, Sharmeen Obaid-Chinoy and Meera Menon to direct. Whew!

Back to the casting announcement, which is, I might add, a VERY big deal. When the news dropped, Deadline posted a photo of Vellani that initially disappointed some because the actress, who is Pakistani-Canadian, looked much lighter than Kamala Khan’s darker skin tone. Was Marvel being colorist? (Remember that Hollywood has a hard-on for lighter-skinned people of color regardless of the role.)

Luckily, the internet’s blood pressure went back to normal levels because such was not the case. In fact, Vellani was actually a darker-skinned Brown woman like her fictional counterpart. However, the picture used for the casting announcement was taken during last year’s Toronto International Film Festival and the photo — because most photographers still aren’t good when lighting people of color — made Vellani look lighter than she actually was.

All that said, the fact that a TIFF photographer either didn’t light the actress properly or purposefully washed her out in post speaks to a larger problem in Hollywood and society in general. The photographer may not have intended to shoot Vellani that way, but leaving her looking lighter for a professional photo isn’t professional at all and the colorism jumped out. It threw people off and, considering that Ms. Marvel’s casting was supposed to be a celebration, it momentarily had many wondering whether this was just another issue they had to take up with Marvel Studios. Here’s hoping that Vellani will find someone who can photograph her accurately in the future.

An incredibly sweet thing is that it looks like Iman Vellani, the newcomer playing Kamala Khan in Disney+'s MS. MARVEL was part of the TIFF panel last year who earmarked films to appeal to younger viewers. Vellani picked @yoyogeraldinev's HALA. https://t.co/ptQgGWECcb pic.twitter.com/iO3m9MSwQV