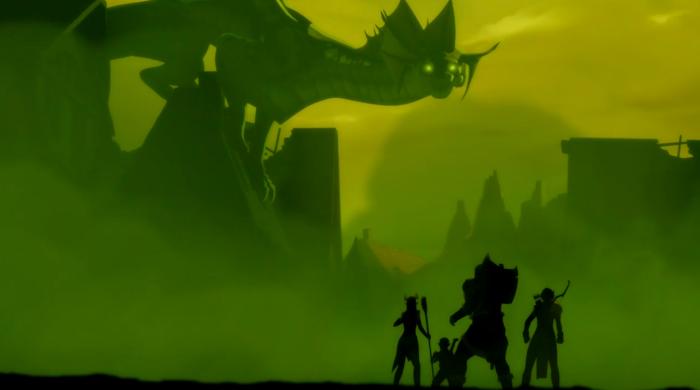 'The Legend of Vox Machina' Season 2: More of the Same, but Better

Rejoice, people of the Tal-Dorei Empire; the Briarwoods are defeated! The dastardly duo of necromancer Lady Briarwood and her vampire husband were slain by the heroic mercenary band Vox Machina, and the city of Whitestone is once again as free as a feudal society can be. Emperor Uriel, free of the Briarwoods’ sinister influence, has decided to step down and return power to the people, or at least the people wealthy and influential enough to sit on the Council. Everyone can finally take a minute to breathe. But what’s this, flying out of the sunset? It looks like 4 enormous Ancient Dragons of various hues, hellbent on looting and widespread destruction.

Did you like Vox Machina’s first season? Then I have good news for you; they didn’t fix what wasn’t broken. Season 2 picks up seamlessly from the cliffhanger ending provided by “The Darkness Within” as the Dragons’ Chroma Conclave attacked the capital city of Eman. Our heroes are woefully outgunned and their only option is flight, first to Whitestone and then to the frozen hub of the continent’s most popular religions, Vasselheim. It’s here the team learns about the Vestiges of Divergence, powerful artifacts hidden since an ancient war with the gods. With these, perhaps, the Conclave can be defeated. But recovering them is no easy feat, and may cost our heroes their lives. 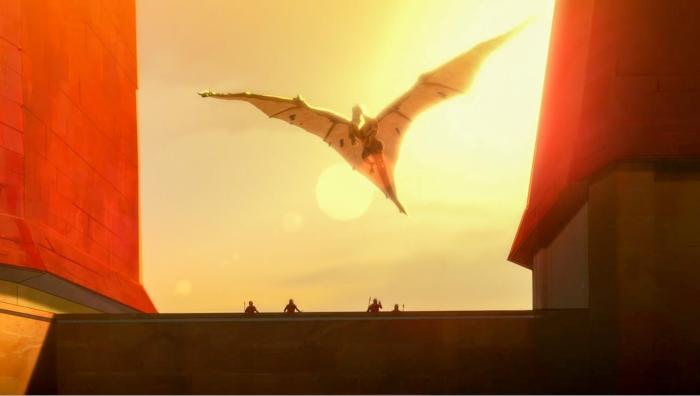 Everything you liked about the first season returns and there are improvements. Less moping, for one. Vox Machina’s biggest problem — and indeed Critical Role’s in general — has always been a tendency towards angst. It’s what happens when most characters have serious trauma buried in their personal histories. Half of the first season was spent on characters staring pensively at the horizon or reliving past wrongs. So far, at least, this season doesn’t indulge in that. There’s too much to do, as Vox Machina battles dragons, monks, and fish people. Oh, and Grog gets a beard. The animation feels a bit smoother but is otherwise unchanged. Titmouse Inc. remains master of their craft, and spectacles like Eman’s destruction at the claws of fire dragon Thordak (Lance Reddick) are stunning.

There are more guest stars this season, with notable genre favorites Reddick, Gina Torres (Keeper Yennen), Will Friedle of Boy Meets World (Kashaw), and Mary Elizabeth McGlynn (Zahra) chief among them. Dungeon Master Matthew Mercer is there in his many guises, particularly as fan favorite Victor, Vasselheim’s crazed gunpowder merchant. The rest of the cast, veteran voice actors one and all, remain at the top of their game. The writing is less clunky this time if still heavy on exposition. Though to be fair, this is Dungeons & Dragons. Exposition is kind of its thing. 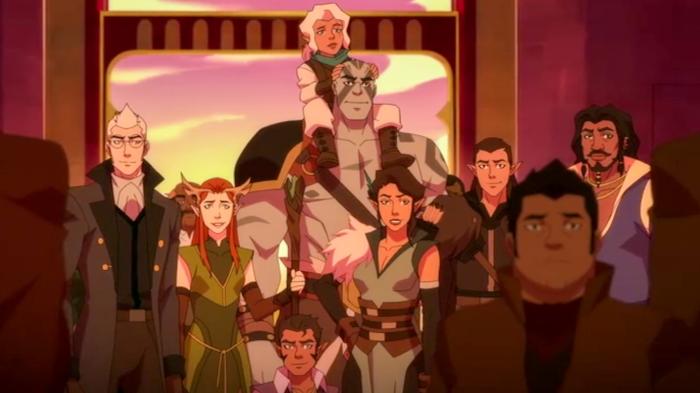 I have minor quibbles. Chief among them is Friedle’s restrained performance as Kashaw. In the original campaign, he was foul-mouthed, and inappropriate in the best ways. The unscripted nature gave him room to let his freak flag fly. We don’t get that in this scripted version, at least not yet. There’s also a lot crammed into these first 3 episodes and as a result, it sometimes feels like unrelated scenes jammed together, rather than a cohesive storyline. The story also suffers a bit without a singular clear goal in front of them. At its core the hunt for Vestiges is a series of elaborate fetch quests, one of the least interesting parts of any game. They might as well have given this season the title The Hunt for MacGuffins. I suspect the middle of this season might bog down without the hours of character interaction that makes a D&D campaign so engaging. I also hoped a new season would mean a new opening theme, but no such luck. Not that there’s anything wrong with the current opener; it’s great. I’m just a greedy bastard.

These little issues are irrelevant in the face of gorgeous animation, engaging characters and dialogue, and fierce action that defines The Legend of Vox Machina. 3 episodes into the second season it holds to the high standards set in the first. The story is complete enough that newcomers (who start with the pilot) will find a satisfying experience. Critical Role fans, who know the thrilling moments and heartbreak on the way, will find themselves equally engaged as they wait for the next shoe to drop. Don’t hesitate to add The Legend of Vox Machina back to your watchlist.


← How 'Diary of the Wimpy Kid' Is like 'It's Always Sunny in Philadelphia' | It Isn't Possible To Make Nicolas Cage Boring, But 'The Old Way' Manages It →