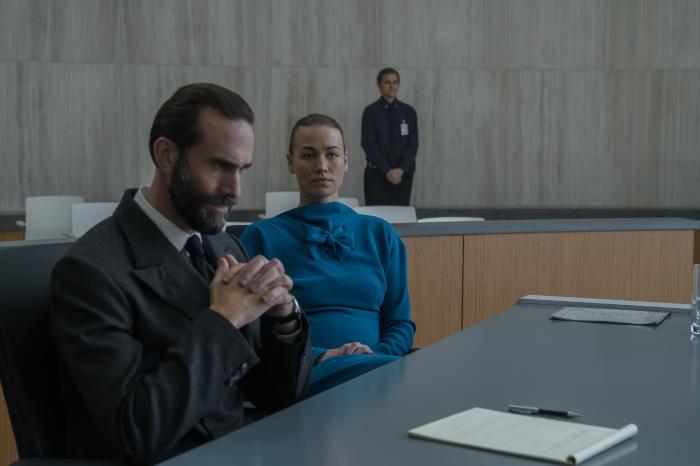 ‘The Handmaid’s Tale’ Recap: You Can’t Handle The Truth

Previously, on The Handmaid’s Tale: June struggled to adjust to life in Canada and did some Very Bad Things along the way, creating an unholy alliance between Fred and Serena, while Mr Tuello rubbed his hands together with glee for reasons that are yet to become clear. Here’s my recap for episode 7 if you missed it!

This week: June faces the Waterfords in court, and tries to stir up her fellow refugees. Luke tries to understand her trauma a little better, and Moira becomes very uncomfortable when she sees New June at work. The truth has always been considered dangerous on this show, and this week it is strategically served up and rationed out, and even weaponised. There are spoilers ahead for episode 8; let’s form a healing circle, talk this thing out and hope we all feel better soon.

If you haven’t seen The Handmaid’s Tale for a while, this is a handy moment to jump back in, because much of it is its own recap, which is both a blessing and a curse. June’s victim statement is an important moment in dramatic terms: the show loves bringing June face to face with the Waterfords, and spent a long old time keeping that dynamic going (cough season 2 cough), but now the power dynamic has flipped around and they have to listen to her. It’s also important in terms of giving June a voice and allowing her to name what happened to her, publicly. It would also be an important part of a healing journey. However, when we’ve seen all the horrors play out over four seasons, it doesn’t quite land with the dramatic resonance it was probably aiming for.

The build up was all there. June has a ceremonial makeover, and at the former Handmaid support group, she finds lots of emotional support and acceptance. She doesn’t want that though; she “can’t fucking wait” to tear the Waterfords a new one. She doesn’t want hugs and hand-holding; she wants to get the guns a-blazing.

June: Why aren’t they more angry?

Moira: How do you know they’re not?

Nail on the head, Moira. June wants everyone to behave like her, perhaps because there is comfort in feeling normal. Maybe her pain is fresher, and what she’s seeing from other Handmaids like Emily are wounds that have scabbed over. Either way, she perceives the lack of overt violent rage as weakness. Moira is trying to soothe the wounds; June wants to open them up again. The two approaches clash when a woman called Iris wants to talk to Emily. Iris was formerly Aunt Irene, and Emily does NOT want to talk to her. Moira and Luke want to shield Emily, but June believes in confrontation.

It’s tense chez June. Luke is understandably upset about what June did to him last week, but he won’t directly comment on it, either to her or to Moira. He wants to understand her, and wants to support her in court. She doesn’t want him there — allegedly to protect him from hearing it all. Are we meant to be annoyed that Luke shows up at court anyway? Is this meant to be a violation of her consent? After what June did last week, it didn’t land that way for me. I know not everyone is as fully Team Luke as me, but the guy is trying to understand what happened to his wife, and by extension, what happened to him; he’s there to support her even if what she says will upset him. He shows up, but doesn’t take over, or talk for her; he sits at the back and listens. He can handle it. She’s not outnumbered by the Waterfords anymore; both she and Fred have their spouses present as reinforcement.

June’s victim statement was delivered in a single shot that gradually creeps closer over its seven minutes, making the delivery frank and disarmingly simple. When the camera finally cuts away, it’s first to Luke, who nods in support while holding in his emotions, then to the Waterfords, who sit there looking awkward and annoyed but not ashamed, more’s the pity.

Then it’s time for the Waterfords’ lawyer to be an arsehole, which she does, because PLOT TWIST, there are arseholes in Canada too, damnit. Fred can’t help himself and jumps in there as well. For a second, I thought June was going to punch him in the face. (Yes, June! You can punch him!) But she will have the last word instead.

“I am done. I am done. Anything more can wait for your trial.”

She’s said her piece, but it’s anti-climactic. Nothing will be resolved today. Fred hasn’t seen the error of his ways. He’s not being punished yet. So June forces another confrontation, bringing Aunt Irene to Handmaids Anonymous, to face the wrath of the group. June might claim that this is to try and “help” Emily, but it’s hard to see this as anything other than June wanting to hurt someone from Gilead to feel that rush of power from last week again.

This confrontation was never going to go well. Mimicking the Testifying sessions from the Red Center, Aunt Irene confesses her sins and the former Handmaids offer judgement, led by June in the role of Aunt Lydia again. If this was for Emily’s sake, don’t you think she should be allowed to speak more, June? Aunt Irene wants forgiveness; unsurprisingly, none is offered. Afterwards, June is smug. She’s already forgotten about her time in court, and seems startled, even irritated, when Luke brings it up over dinner. Luke’s unconditional support isn’t what she wants; it’s too close to the hand-holding from the group. She tries to shut him up with more sexual aggression, but Luke snaps. There are, rightly, limits to his tolerance.

Moira is also reaching her tolerance limit, describing June’s behaviour to Emily as “shitty”. Moira has become an expert in reframing what happens in a general, non-committal way, but she’s struggling with June. She is all about ‘moving forward’ rather than punishing, and suggests that Emily encourages Aunt Irene to come forward as a witness. (See how that’s more productive than screaming, June?) Alas, it’s not to be. When Emily pays Irene a visit, she discovers that Irene has apparently died by suicide. I will confess, I wondered if June had killed her and made it look like a suicide… But this is an effective demonstration of the indirect consequences of June’s way, and to her horror, Moira sees Handmaids Anonymous sliding towards June’s way. Rage is easier than healing. As June nods in approval at each suggestion of violent retribution, Moira is horrified.

“Anger is a valid emotion. It’s necessary, important even, to heal. But we can’t live there.”

On the War Table, the pieces are assembling and taking sides for the great battle ahead. June has moulded the other Handmaids in her image, and they want blood. She’s made another army. When she gets home, she recruits another member, by telling Luke the final part of the story about Hannah. It’s not that she feels sufficiently healed to tell him this last piece of truth; it’s entirely strategic. It’s to fire him up, and deflect his frustration away from her. Across town, the Waterfords are assembling allies as well. Building on the last PLOT TWIST, it turns out there are even more arseholes in Canada, as the Waterfords now have fans. FANS. WHAT THE ACTUAL CHUFF?! This ain’t over, folks.

Meanwhile, back in Gilead:

Aunt Lydia’s management style has evolved; she’s going in hard this time, terrorising the new class of Handmaids while her Aunt subordinates snigger behind her back. She does not feel secure in her power yet, and overcompensates with ruthlessness, even zapping Aunt Ruth with the cattle prod when she feels she needs to make a statement. (Is it too on the nose that she is ruthless to Aunt Ruth?) Commander Lawrence has to step in and tell her off. His pep talks leave a lot to be desired.

Aunt Lydia now faces a test, in the form of our beloved Janine, who survived the bombing in Chicago (HOORAY!) and has been recaptured (BOO!). Will Lydia continue her reign of terror, or try a different approach? Lydia and Janine’s relationship continues to be fascinating; Lydia seems genuinely emotional at seeing Janine’s file, and immediately leaps to her defence, saying that she was led astray by June.

Lawrence seems to think Janine will be a useful outlet for Lydia’s sadistic impulses. Lydia has been sadistic and brutal with Janine in the past, but she also has a soft spot for her, and if there is any hope for Janine, we’ll be praying that the soft spot wins for a while. Lydia’s reunion with Janine certainly starts in the normal fashion, with Lydia in cruel mode, but it’s the frank and vulnerable confession from Janine that seems to soften her resolve. Janine would rather die than be a Handmaid again, and with that Lydia sees that she has failed. Janine was her favourite, and she has rejected all of the brainwashing from the Red Center. Can she handle it? Well, Lydia cries, y’all. She hugs her. There is still potential horror when Lydia wonders, “whatever are we going to do with you,” but there is some actual sympathy as well, so I am holding out some hope. I may regret my choices later, but let me have a glimmer of hope for now.

Next time: Over to you, lads! The men of Gilead, Canada and America have the chance to step up and show what they can do. No pressure, Nick.