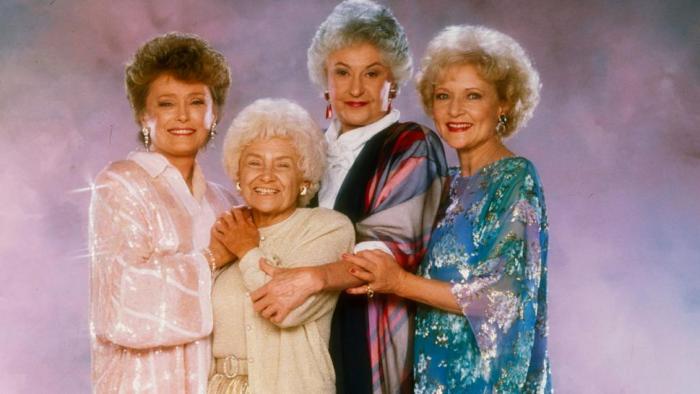 Thank You For Being A Mindhole Blower: 11 Facts About 'The Golden Girls'

Pajiban TheOtherGreg pointed me to this Tweet, correctly informing me that it needed an entire article and not just a blurb.

The television show The Golden Girls was originally a joke. NBC prepared a parody of Miami Vice, Miami Nice, featuring old people sitting around playing cards. NBC's senior vice president thought it sounded like an excellent idea, so he asked for it to be made into a show. pic.twitter.com/fG9EgpLvnF

Say WHAAAAAT? What other gems are hiding in plain sight, wearing caftans and comfortable trousers while eating cheesecake and contemplating the impressive Ho of Blanche Devereaux (Rue McClanahan)? As Kate said, “Picture it, the coked-up board of NBC, 1988…”

1. The pilot episode replaced main character Sophia Petrillo (Estelle Getty) with a live-in cook named Coco (Charles Levin). After fans reacted so positively to Sophia in the pilot, she changed from guest star to full-time cast member and Coco was cut from the series. Levin went missing over the summer of 2019 only to be found dead in a ravine near his car, falling into the area while attempting to get help. He was 70.

2. Betty White (Rose Nyland) was the oldest member of the cast while McClanahan was the youngest. According to IMDB, in an eerie coincidence, the show foretold the women’s fates during “Sophia’s Choice” in Season 4, Episode 22:

In the last scene, Rose suggests they make a pact that they will always stick together so they won’t battle old age alone; Blanche adds that they all should go to a nursing home together. Rose then adds “but what happens when there is only one of us left?” which, after a reflective yet morbid pause, Sophia replies “Don’t worry, I can take care of myself.” The eerie coincidence of this scene is that Betty White has outlived her costars, becoming “the only one left” as her line once questioned. They are also sitting in the order in which they passed away.

Furthermore, the oldest actress in the cast - Betty White - is the last one left, just as Sophia proclaimed with her line.

3. Getty had horrible stage fright, freezing up during live tapings almost every Friday they filmed. She admitted her co-stars, more experienced than her, intimidated her and she feared fans would find she was a fraud of an actress.

4. Over seven seasons and 180 episodes, the show and actresses gathered 68 Emmy nominations. Every lead actress won an Emmy for the show.

5. In August 1984, NBC was filming a special about the upcoming 1984-1985 television season when they decided to parody Miami Vice with Miami Nice, a show about older people living in the Florida city. They enlisted the help of Doris Robert (Remington Steele) and Selma Diamond (Night Court) to film the parody.

The NBC senior vice president Warren Littlefield enjoyed the skit and when turning down producers Paul Junger Witt and Tony Thomas in their pitch for a show about a female lawyer, he offered up the sitcom premise instead. The rest is history.

6. McClanahan and White were close off the set of the show but none of the other women hung out. Arthur reportedly disliked White and called her a c*nt on one occasion. McClanahan described Arthur as “eccentric”.

7. Quentin Tarantino appeared as an Elvis impersonator on the episode “Sophia’s Wedding: Part I” in 1988.

8. Arthur hated cheesecake, but she and the other lead actresses consumed more than 100 of them over the course of the show.

10. McClanahan’s contract stipulated that the actress got to keep all of the clothes worn by her character on the show.

11. Getty’s aging makeup took around 45 minutes to do. Between season one and season two, Getty treated herself to a facelift, frustrating the makeup department, allegedly.

← Wage Disputes Shouldn't Be a Goddamn Race to the Bottom, Stop Doing the Ruling Class' Job For Them | Does the Greedo Edit Mean 'Star Wars' Theatrical Cuts Won't Be Available on Disney Plus? Maybe →