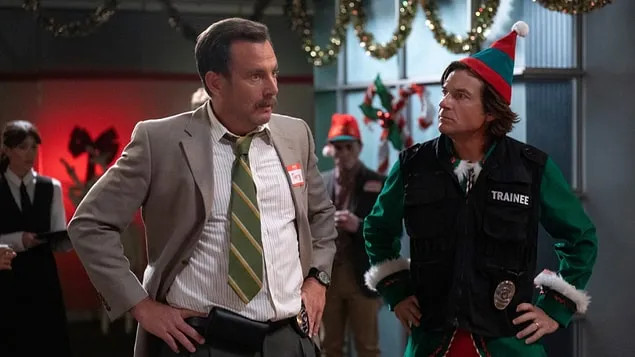 The Delight that Is ‘Murderville’ Returns with Uproarious Holiday Special

The ridiculous and ridiculously fun improv/murder-mystery show Murderville is back again with some Christmas cheer.

The premise of this haphazard little Netflix gem: Will Arnett stars as Detective Terry Seattle, a man somehow even more divorced than Elon Musk, who works as a homicide detective with an ever-rotating door of trainee partners, assigned by his ex-wife and boss, Chief Rhonda Jenkins-Seattle (Haneefah Wood). Here’s the catch: each episode presents a new trainee partner—a celebrity guest who is the only actor involved not provided a script, who has to improv their way through a hilarious investigation and ultimately try to determine who the guilty party was.

If you haven’t seen the first season on Netflix, do yourself a favor and go on that journey. In the first episode, Conan O’Brien undertakes a very bold Hot-Ones-style interrogation, and in the second, Marshawn Lynch has the time of his goddamn life. Ken Jeong, Sharon Stone, Kumail Nanjiani, and similarly wonderful company round out the season and left me pining for season two.

Luckily, if there’s one thing Netflix can be counted on for, it’s more content. Cue the holiday special: Who Killed Santa?: A Murderville Murder Mystery.

Just settling down to watch his favorite Christmas movie, Die Hard (on VHS, naturally), Seattle is interrupted by an assignment of his new trainee partner to work security at the mayor’s Christmas party. In steps Jason Bateman, joined by second trainee Maya Rudolph. And they aren’t the last assignees of this whirlwind 50-ish-minute special.

Part of the delight of the show is just how much fun everybody is having and how unseriously the show takes itself. It has the energetic, spontaneous abandon of SNL at its best. Case in point: Sean Hayes (as a supposedly dead body), breaks down laughing time and time again, and it’s fantastic. Rudolph and Bateman Weekend at Bernie’s his bloodstained Santa corpse in order to keep the orphans’ spirits up. Solving the murder is very, very important plot-wise because if they don’t the orphans won’t get their presents, and then they’ll stop believing in Santa. (Also the mayor, played by Tawny Newsome, wants to save her political career.) Not much makes sense. It’s a wild west of a murder mystery party. And it works very very well.

On this absurd and hilarious journey, Bateman and Rudolph gradually get into the Murderville spirit, and their antics escalate to be on par with Seattle’s scripted bumbling. This is one of those shows where I can’t describe for you what its best scenes are without taking some of the spark out of them when you watch it (as you should). If you want to see Pete Davidson—playing himself and as stoned-seeming as ever—break Arnett in a pivotal finale scene, you know where to go.

If you can get away with some crass jokes and censored nudity at your holiday gathering this year, I guarantee you Murderville will bring you even more joy than watching Brandon Routh trolled with pointed Superman jokes by the writers of Hallmark’s The Nine Kittens of Christmas. (My wife and I found that incredibly, horribly funny, at least, but maybe that was a delirious side effect of my mother-in-law’s annual Hallmark movie marathon.)

Murderville season one and Who Killed Santa? are both streaming on Netflix.