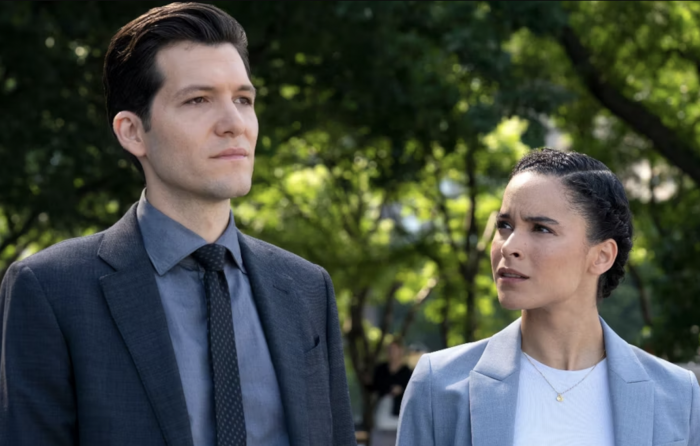 'The Calling' Makes an Attempt at Jewish Representation; Too Bad It's Awful

The premise of The Calling centers on a Jewish New York detective, Avraham “Avi” Avraham (Jeff Wilbusch), whose intuitive and spiritual inclinations make him a uniquely effective investigator and interviewer. The premise isn’t exactly bad. It worked to some degree with procedurals like The Mentalist and Psych—of course, in different flavors. But The Calling doesn’t really answer to any precise description. It’s not comedy. It’s barely a drama. There’s no charming outsider guiding the investigation. Instead, Avi is set up as the revered centerpiece, ace, hole-in-one guy at the station, the guy everyone gets excited about. No one dares interrupt his process. Small manipulations of emotion are celebrated as some kind of masterstroke.

The novelty of Ari’s character is … that he’s Jewish. That’s right, a Jewish spiritual detective who quotes the Talmud authoritatively. He is guided by Jewish thought and teaching and makes as much clear from scene to scene. He prays over the body of a murdered (OK, manslaughtered) victim on the sidewalk of New York with the kaddish. Jeff Wilbusch, an Israeli actor raised in a Hasidic community, does an admirable job trying to carry this thankless project, as do his costars. Juliana Canfield appears as Janine Harris, the apprentice New York detective looking to learn from Avi. Karen Robinson is Captain Kathleen Davies, who oversees both leads with absolute faith in Avi’s ability; her only doubt about him is that anyone could learn to do what he does.

But while he davens (dramatically on the rooftops, naturally) in the mornings, wrapping tefillin and wearing a tallis draped over his head—apparently, a very observant Jew—he doesn’t wear a kippah or tzitzit which one might expect with that level of religious observance. I mean, he would definitely be wearing a kippah (tzitzit could go either way). It’s a weird disconnect. When my wife asked me why that was, in the heat of my absolute fury at having to watch this show, I answered that it was probably because the showrunners wanted Avi to be as incredibly hot as possible. I don’t know how far off the mark I was with that knee-jerk response. (For clarity: What I’m implying here is that there’s some low-key and certainly unintentional antisemitism at work in the aesthetic decision that visible attributes of Judaism would be read as unattractive. But that’s just me. Challenge away.)

In the interests of fairness, I’ll quote The Jewish Telegraphic Agency, where Wilbusch commented “He’s not just Jewish because his name is Avraham, or Jewish because he wears a kippah. He’s Jewish because many different things make him Jewish storytelling-wise.”

The central mystery of the first season is the disappearance of a troubled boy; his mother comes to Avi pleading for help in episode one. An unhappy home situation is complicated by the boy’s aggressively insecure and desperately wanna-be-masculine tutor, an aspiring (and failing) writer named Zack (Noel Fisher, deserving of a better-written character) who lives with his inexplicably supportive and forgiving wife Dania (Annabelle Dexter-Jones). The plot thickens. The writing slogs. I found myself growing increasingly uninterested. It just doesn’t have the necessary hook or energy that would have given the story life.

For all the intrigue of the set-up and the intriguing possibilities, Avi remains an absolute white-bread mayonnaise sandwich of a lead, and I was tired of it within the first ten minutes. I kept waiting for the other shoe to drop, for the character to become more complicated or more convincing. No such luck. This is particularly tough because the show is so character-focused; it’s clear it’s aiming to be a portrait of a complex and deeply human investigator.

I’m especially crestfallen about this show because it did have such great potential for unique Jewish representation, especially during a time when explicit antisemitism is rearing its ugly head across America as well as in un-moderated dog whistling on the decaying husk of Twitter. Yeah, some strong Jewish representation on TV would have been nice right about now. And while I applaud the show for at least trying, this ain’t it. (That is, please keep trying?)

I’ll admit that I’m not familiar with the “Avraham Avraham” series of novels by Israeli novelist Dror Mishani (publishing under D.A. Mishani) whose works have been frequently adapted. Maybe this is an instance of an adaptation trying to stick too close to successful source material without questioning what might fall short on screen. But I’ll also admit that the show doesn’t inspire me to turn to the novels to find out. The fact that the books are set in Israel but producer David Kelley and director Barry Levinson transpose the character to New York City might not help.

The first season of The Calling is now streaming on Peacock.