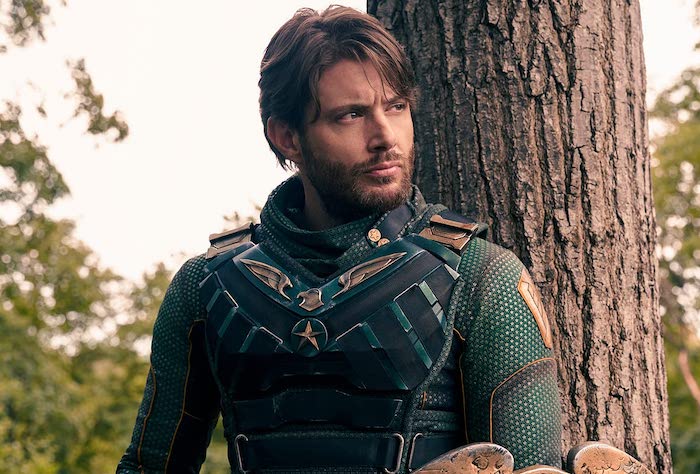 'The Boys' Brings Us Exactly What We've Been Waiting For

Warning: Massive spoilers and penises ahead.

What an episode. Eric Kripke and company gradually ramp up the tension to such a degree that my heart was pounding by the time credits rolled. Herogasm went light on the politics and delivered on the filth and character development, so let’s dive right in.

Beginning with performative allyship from The Deep that segues neatly into a perfect parody of Gal Gadot’s “Imagine” music video — featuring Patton Oswalt, Mila Kunis, Ashton Kutcher, and Elizabeth Banks, among others — the episode focuses on Soldier Boy and Butcher’s quest for payback. In Soldier Boy’s case, that hunt is literal. He’s hunting his former Supe team, Payback, and is willing to go toe-to-toe with Homelander if it means getting his revenge. Having been frozen since the 1980s means he’s a racist, misogynistic relic who doesn’t know how to use the Internet. He’s the optimal Facebook user but lacks the necessary email address. So Butcher and Hughie supply him with bourbon, bennies, and a hotel room while they track down the TNT Twins, strictly C-rank celebrities who were part of his team.

They better hurry because The Deep finally figured out how to use a computer and shows Homelander proof that Soldier Boy killed Crimson Countess, and Homelander freaks. This is the first time we’ve seen Homelander truly frightened of not only losing the public’s favor but also the physical violence ahead. He orders The Deep to find Soldier Boy, whatever it takes.

Starlight and MM are on a similar search. Thanks to MM’s meticulous research, they know where to find the twins and are planning to get there before Soldier Boy so they can bring him down. Starlight’s not happy to see Mother’s Milk is arming up to take down Butcher and Hughie as well, and Laz Alonso delivers the perfect riposte to her urging him to calm down when she, the other Supes, and white people in general are allowed to flail around however they like. Annie’s trying to keep him on the right path and save Hughie if possible but gets called back to the Tower by Ashley before they can go anywhere.

Speaking of Ashley, she has had it. She may be spineless evil personified but she pulls it together long enough to deliver a stinging rebuke to A-Train when he protests Vought’s lack of action against Blue Hawk for crippling his brother. A-Train is, after all, responsible for multiple murders. Between Hughie’s girlfriend Robin at the beginning of the series, his own girlfriend Pop Clow, and several club-related incidents, A-Train has murdered at least 4 people that Vought swept under the rug. He’s the perfect representation of the Leopards Eating People’s Faces Party meme that’s been around since 2016.

Homelander’s day goes from bad to worse when The Deep informs him that Noir, the one person Homelander thought was in his corner, has cut out his tracking chip and abandoned the Tower. Noir, a member of Payback until half his face was blown off and Soldier Boy captured, realized his old leader was hunting down the team and beat a hasty retreat. Deep is ordered to stake out the TNT Twin’s home in Vermont and alert Homelander if Soldier Boy arrives. This is also a good opportunity to point out that Katy Breier is killing it as The Deep’s cult-selected wife Cassandra. Openly devoted and adoring, privately contemptuous of Deep and his predilections, she is The Boys’ Lady Macbeth and plays her role perfectly.

Speaking of metaphorically killing it, Antony Starr does so in the next scene while talking to his reflection. To be fair, the reflection does most of the talking, boosting Homelander’s confidence before mocking his obsessive need to be loved by the “mud people.” He wants to cut out that last little human bit and turn Homelander into something pure. Starr’s angst as he’s berated by his double is so good that I felt a second’s pity for the superpowered psychopath. A rabid animal can’t help being rabid, and it’s possible to feel bad for it even when you know it must be put down. That doesn’t make his rant at a Vought News Network talk show host any less terrifying when she dares go off script and asks Victoria Neuman how the American people should feel about these terrorist attacks after Homelander already told them everything was fine.

Soldier Boy and Hughie bond a bit while watching one of the Supe’s old movies. Payback’s fighting the Soviets in Afghanistan and it’s a grimly hilarious reminder that movies like Rambo III provided propaganda for both the US military and the “freedom fighters” who would a few decades later bring down the Twin Towers. Hughie squirms as the Supe rants and radiation levels in the room increase with his anger. 40 years of imprisonment, torture, and abandonment after serving his country in WWII, the Middle East, and Central America have left him understandably bitter. Despite his many flaws, Solder Boy still sees himself as a genuine hero, I think, and he can’t understand what went wrong. He also can’t remember why he exploded in Midtown, which doesn’t bode well for the future. Butcher’s found the twins, and after the Boys shoot up it’s time for a road trip to Vermont. Starlight’s on her way too, after a frank heart-to-heart with Victoria Neuman in which no one explodes or fries despite Starlight refusing to cast aside her morality to ally with Neuman. She’s had enough, and it shows.

Things aren’t going well for Kimiko and Frenchie either. Originally worried Frenchie disappeared because of their kiss, Kimiko is kidnapped and brought to a warehouse where Little Nina is holding Frenchie and Cherie captive. She tries to get Frenchie to decide which of his loves should die before Kimiko, still unpowered, uses the skills she learned as a child soldier to break free and carve a bloody swathe through Nina’s men, nearly dying in the process. All 3 make their escape, as does Nina. Kimiko is devastated to realize that the V did not change the person she was; like all of us, she has an inherent capacity for violence. Hers was honed by the conditions she was forced to endure, but it wasn’t created by them.

There are ice dildos. Telekinetic sex toys. A former Supe dressed like Rosie O’Donnell in Exit to Eden. Tiny dudes all the way up inside people. And enough sperm to choke a giraffe, not that you’d want to. Basically 20 minutes of the show that I’m not allowed to screenshot. My personal favorite bit character is Love Sausage, a jovial Russian gentleman with a 10-foot-long prehensile penis. Picture Doctor Octopus’s tentacle but covered in wrinkly flesh and an intact foreskin. Which makes sense; can you imagine the poor mohel dealing with that monstrosity? Oh, and Deep gets caught en flagrante octopuso, if you know what I mean (He f*cks an octopus).

But even here there’s a seamy underbelly to the fun. All the girls are sex workers, and many of them will be deeply traumatized and suffer internal injuries by day’s end. That’s on a good day, which this is not. All the heavy hitters congregate on the homestead. Hughie confronts A-Train and gets the apology he always said he wanted. A-Train confronts Blue Hawk and does the right thing, perhaps for the first time in his adult life. Hughie and Butcher take the time to break Starlight and MM’s hearts before Soldier Boy, triggered once again by Russian music, lays waste to the Twins and everything before him. Then Homelander arrives and kids, this is what we’ve waited for. The best action scene since the Girls kicked the shit out of Stormfront has Soldier Boy, Butcher, and Hughie face down Homelander and win. It’s a hollow victory because Homelander manages to escape, but they’ve shattered his assumptions about the world and his place in it. His armor is cracked, and Starlight uses the opportunity to sink a metaphorical knife into his side by broadcasting out to her 193 million Insta followers the truth about Soldier Boy’s attacks, about Vought, about the Supes, and most especially about Homelander. And we’re left to wonder for another week what his response will be.

I don’t understand how this show remains so consistently good given the material it works with. It moves from scathing political commentary to visceral fear and heartbreak to a guy getting poked in the back by a giant dick without breaking stride. It shouldn’t work! But it absolutely does. The cast, writing, and direction are all top-notch. Jensen Ackles is perfect for the role of Soldier Boy; gruff but charismatic, his man-out-of-time role offers a great combination of obliviousness to today’s reality and a deep vulnerability after decades of abuse. Eric Kripke spoke about how worried he was about the show’s direction this season, calling it “really fun and breezy to write.” That’s usually a bad sign, in his opinion. But 6 episodes in, pretty much everything works. They’re juggling at least 11 different viewpoints this season without losing track of anyone. Some lack screen time — Deep and Ashley, for example — but their characters still develop. Even an episode based on a superhero orgy hits all its marks. It’s a master class in storytelling.

This episode left a lot of questions unanswered. How will Homelander respond to Starlight’s — sorry, Annie’s — confession to the world? Is A-Train dead for good this time, and if so will we see our first “zombie” Supe since his body’s unharmed? Where’s Stan Edgar and Maeve, and did Victoria Neuman’s daughter come through her V exposure without horrifying side effects? When will Little Nina make her move? Will Hughie ever stop being a self-absorbed asshole around Annie? And now that Homelander understands the danger posed by Soldier Boy, Butcher, and Hughie working together, how will they ever get another shot? It’s not lost on me that had MM taken V they’d have likely won, and I wonder if that will play into his future decisions. For now, he and Annie remain the brightest — the only — moral beings in The Boys’ world. I hope that remains true.


← The Known Knowns After the Latest Episode of FX's 'The Old Man' | 'The Black Phone' Is a Spooky, Scary Horror Movie with a Capital 'H' →