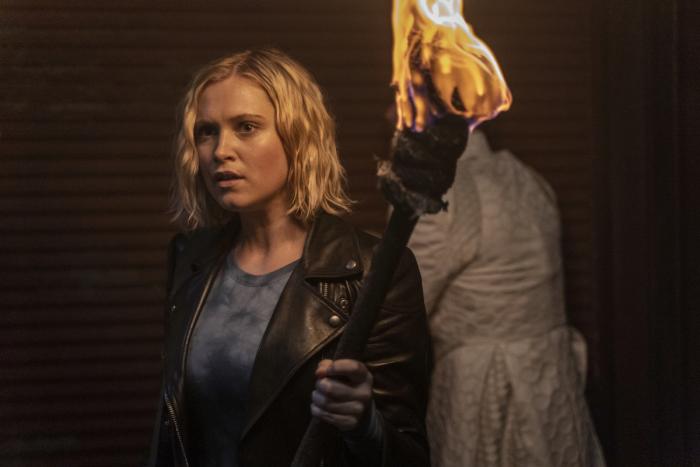 'The 100' Killed Off a Major Character for a Stupid Reason

Spoilers for The 100 episode “Blood Giant.” You’ve been warned.

With three episodes left before its series finale, The 100 just killed off Bellamy Blake, the beloved fan-favorite and male lead of the show. The person who ultimately pulled the trigger was Clarke Griffin, perhaps the person he trusted most in the world. Suffice it to say that fans are very pissed off about it, too. However, it’s not that he died that is bothering people most, but the way that it happened. Considering The 100’s track record with character deaths anyway, Bellamy’s isn’t all that surprising (it’s the last season and all). Rather, it’s the lead-up (or lack thereof) that led to his demise that’s the culprit.

After seven seasons and a heavily reduced role in The 100’s final run, Bellamy went out with little more than a silent whimper (honestly, it was so fast I doubt many cried, but the anger was definitely there). What it boils down to is that Clarke shot her long-time friend in the chest… over a notebook. A notebook that contained drawings of the future, sure, but a notebook nonetheless. And you know what? Bellamy died for a damn notebook that Clarke left behind anyway, so what was the point???

If, by this point, you’re thinking the writers can fix this, you’re wrong. And besides, there’s no way they can gain back whatever goodwill is left anyway. It’s gone. Plus, Bob Morley apparently requested to be in less episodes this season, but the whole Bellamy dying thing is weird when we factor in that time The 100 alum Ricky Whittle (who played Lincoln) accused showrunner Jason Rothenberg of “professionally bullying” him and cutting short his storylines that ultimately led to his character’s early demise.

“It was my choice to go. Jason Rothenberg abused his position to make my job untenable. What he did was disgusting and he should be ashamed… He was professionally bullying me, cutting out all the storyline I was supposed to be doing, cutting lines, cutting everything out, trying to make my character and myself as insignificant as possible.”

This honestly sounds like what he did with Bellamy in Season 7. Reduce his role, belittle his overall importance to the narrative, detach him from the other characters’ lives so that even Clarke, who fought for him on several occasions, could kill him in cold blood. Rothenberg’s behavior explains why so many in the fandom dislike him and how Bellamy’s journey may have gotten to this moment.

As an avid viewer of television, I can tell you that the worst thing that could happen on a show is indifference to a character’s death. The fact that there was little angst leading up to Bellamy’s big death scene speaks volumes. What’s worse is that he died alone. What a terrible way to go out after seven seasons.

Of course, at the end of the day, viewers don’t get to write the ending for any character. We can only live with it. At the same time, it would also be nice if a beloved character went out with an emotional farewell instead of with confusion, nonchalance, and disrespect to his journey and impact.