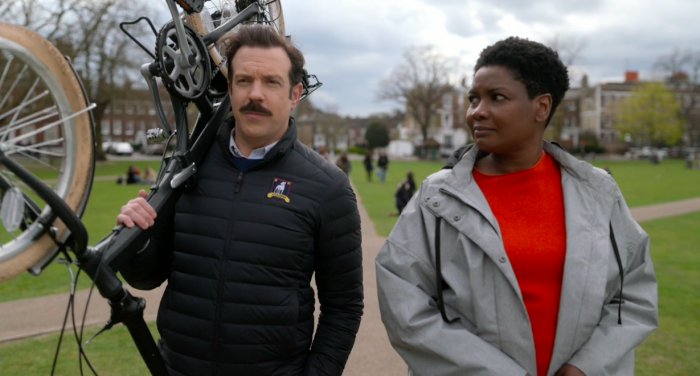 ‘Ted Lasso’ Episode 8 Recap: I Will Be Your Father Figure

Hi, my sweet Lassos. Hope everyone had their tissue box at the ready this week, because this episode called for it. This week opens with Dr. Fieldstone in her flat, which is refreshing, as this is our first glimpse at the Doc outside of the office. As we watch her get ready for work, we overhear a snippet of her teletherapy session (because therapists need counseling, too) where it’s revealed that she and Ted have far more in common than anyone would think. Afterwards, she gets on her bike and merrily makes her way along her daily route. That is, until a maroon car crashes into her, leaving her unconscious on the road as bystanders call for help.

Over at AFC Richmond, Coach Beard and Roy are engaging in what seems to be a staring contest while Ted’s out due to an unknown emergency (it’s an easy guess as to what it is). This is when we learn that the FA Cup semifinal is only a matter of days away. In Ted’s absence, Roy has been asked to run training, which clearly annoys Nate, but when Roy is called away, Nate is able to do it instead, much to his delight.a

While working out in the gym, Jamie gets a phone call from his father, James (Kieran O’Brien), which he rejects. On a nearby stationary bike, Sam’s own father gives him a call, surprising him with the news that Cerethium oil has ceased operations in Nigeria, thanks to the backlash sparked by Sam’s protest back in episode three. Sam has a close relationship with his father, but even he’s stunned at the pride and jubilance in his father’s voice. Jamie overhears their conversation, his face contorting into something that’s a mixture of befuddlement and envy. Boosted by his father’s praise, Sam picks his phone back up and goes to his Bantr messages to send his match (Rebecca, still unbeknownst to him) an invite to dinner. When she tells him yes, his teammates cheer like they just scored a goal. Now that Sam has a date, he knows what needs to be done: a haircut, and the only man to wield those clippers is his very own team captain, Isaac.

Down at the hospital, where Ted is getting a lesson in socialized medicine, Dr. Fieldstone is wheeled out a little worse for wear, but with assurances that she’ll be just fine. Of course, she had no way of knowing that Ted would be waiting, which is made clear by the lively curse she utters upon seeing him. He’s one of the last people she wants to deal with at this moment in time, but with the hospital being unwilling to discharge her without someone attending to her—for her an additional indignity on top of the presumption that Ted is her spouse—she’s stuck with him. They finally make it to her flat, and it’s Ted’s first real opportunity to see Dr. Fieldstone beyond the professional boundary she maintains. From the sparse decor, the book on midlife crisis, to the (mildly alarming) number of empty liquor bottles on her kitchen island. He seems hesitant to leave her alone, but the nature of their relationship doesn’t allow any discussion otherwise, he has no choice but to go.

Roy’s call turns out to be from Phoebe’s school. She’s been swearing at school and quite honestly, the only thing surprising about the situation is that it didn’t happen sooner. What makes it hilarious is that Colonel Profanity here is utterly shocked by the fact that she’s picked up his proclivity for foul language. Later, as Roy and Phoebe sit together eating the ice cream he claimed he would NOT get for her, he explains to her that swearing isn’t appropriate despite it practically being his native language. Although Roy’s concern stems from Phoebe picking up the worst of his habits, she gives a lovely little speech about how the swearing habit reflects the wonderful lessons he’s imparted on her over the years, like standing up for oneself. Roy is touched (Brett Goldstein is marvelous here; a quick averted glance and his throat working are all we need to know how this affects him), though he still makes her agree to quit the salty language. Phoebe agrees, just before she convinces Roy to play Princess and Dragon (which I would pay a substantial amount to see).

Later that night, Rebecca nervously sits in her hired car in front of the restaurant. Keeley contacts her over FaceTime to give her the boost she needs to go inside and risk disappointment (Keeley’s, “You look so f***ing beautiful, I can’t bear it,” followed by an immense kissy face is precious). Rebecca makes her way into the restaurant in her knockout dress and quickly bumps into Sam. The two make pleasantries, complete with Rebecca noting how nice his hair looks, but are completely unable to connect the dots to figure out that they’re meeting one another. In a total rom-com moment, they have their backs to one another at the bar as Sam sends a Bantr message. Rebecca comes to the realization that Sam is her match a second before the notification on her phone gives her identity away to him. Sam is surprised but a bit tickled and not NOT interested, but Rebecca is (rightly) dismayed, to say the least. While her level of concern is a bit much (“I’ve groomed you! All these messages, I was grooming you!”), the boss-employee relationship does indeed make this a no-go situation. But Sam stops her before she can leave, insisting that the two may as well eat together as friends. Her hunger gets the best of her, and as we watch them over the course of their meal, it’s clear that the connection they had online translates extremely well in the real world.

After dinner, they walk up to her front door and the attraction between the two has only gotten stronger. Rebecca is adamant that their evening should not be considered a date, and although Sam tries to humor her, he clearly wants more. He listens to his heart, as he is wont to do, and takes a step closer to her, asking if they could see each other again. Rebecca responds that she is going home alone, and Sam takes the hint. It’s at that moment that Rebecca crosses the distance between them and kisses him. It was a moment of weakness, and she knows it. She reiterates that nothing more can happen between the two of them, and after she closes the door, his sharp blue suit still visible through the glass as he stands there for a few moments longer, she takes a deep breath as she tries to process what just happened.

It’s now Sunday, the day of the biggest match in Richmond’s season, the FA Cup semifinal. They’re up against Manchester City, the team that relegated them at the end of the first season nearly a year earlier. Back in the coach’s room, Ted is practicing a breathing exercise in an attempt to avoid a repeat of what happened at the Tottenham match. He finally confides to his coaching team and Leslie that he has recently been suffering from panic attacks but has been getting help. Each man makes his own confession in turn, which lightens the mood and provides another bonding moment before the match begins. AFC Richmond walk out onto the pitch, and Jamie catches a quick glimpse of his father decked out in Man City garb. The match begins and if this were a sports film, this is the part where our beloved underdogs would pull out a mammoth win, putting themselves on the road toward the big final match. But it doesn’t happen, in fact, it’s nowhere close, as Man City beats them handily. It’s a brutal stomping, and I imagine this sequence was kept short out of mercy since having it go any longer would have been agony to watch. Every member of AFC Richmond is left hanging their head in shame.

Then James Tartt walks into the locker room. Earlier, Jamie referred to his father as “a dick,” and while we’ve had a glimpse of how awful he is, there is no way to prepare for just how much of a raging a*****e this guy is. James proceeds to insult the entire Richmond team before setting his sights on Jamie, who’s spent his entire life being the preferred target of this colossal bully. James immediately writes off his own behavior with a disingenuous “I’m only kidding,” right before asking Jamie to get his two pals access to the pitch. Jamie tells him no, politely at first, before having to become more insistent. After some harsh words and an arm grab, Jamie punches him, something he’s probably spent his entire life imagining, yet never saw himself really doing. Coach Beard grabs James and ejects him from the locker room, while Jamie stands there, unmoving, as though any motion, even breathing, will be too much at the moment. The team is stunned, unsure of what to say or do. That’s when Roy storms forward directly toward Jamie before taking him into his arms in a giant hug. The floodgates open, and Jamie sobs.

Ted makes his way outside and proceeds to call Dr. Fieldstone. She answers, expecting it to be yet another check-in on her. Instead, Ted reveals the darkest period of his life: when his father killed himself when Ted was sixteen years old. She offers to talk about it now, but Ted insists he needs to get back. When Beard finds him, he slips on his mask of good cheer with the eerie swiftness of someone who has practiced it their entire life. Beard declares he’s going to spend some time alone after this brutal Man City loss, and leaves Ted to deal with a demoralized team.

So many complicated feelings happening with this episode. Sam and Rebecca are so loveable and deserve nothing but good things, but no good can come of any sort of relationship beyond their already-existing professional one considering the age difference and power dynamic (that said, I was NOT ready for Sam to be waiting outside that door and may have uttered an undignified noise). Ted is making some amazing headway, especially when one considers how stubborn he’s been. Some of you more observant viewers were able to guess the true source of Ted’s trauma, but it didn’t make that confession the least bit easier to watch. We may get a chance to catch our collective breaths next week as it’s looking like it will be a Coach Beard-focused episode, though he’s been privately going through some stuff as well, so who knows. You may want to keep those tissues nearby, just in case.

Rebecca: “‘I need to reapply my lip liner.’ Men don’t know what that means and women understand it requires time and focus.”

Ted: “‘In concussio veritas,’ right? Isn’t that the saying?”

Kaleena Rivera is the TV Editor for Pajiba. When she isn’t doing a rewatch and quietly gasping over the fact that Jamie has scare quotes around his “Dad” contact in his phone (the attention to detail is amazing), she can be found on Twitter here.