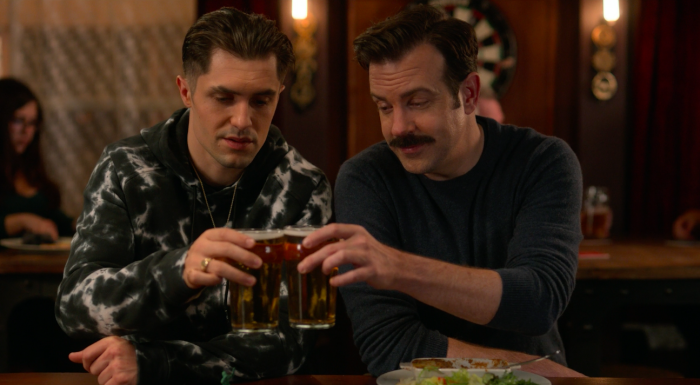 ‘Ted Lasso’ Episode 2 Recap: Hold the Lavender and the Sugar, I Want Those Sweet Tears

(spoilers ahead for the second episode of Ted Lasso)

I’m not gonna lie, I had to Google to be absolutely certain that Lust Conquers All, the Love Island-esque reality show featured in the cold open, wasn’t a real show. Hey, when it comes to the world of dating reality shows, there’s no telling what ridiculous depths they may go to. What the show’s opening does accomplish, however, is to give us a good glimpse of just how well things are going with Jamie Tartt, who we last saw giving a narrow victory to his new team at Manchester City. We don’t know until later what circumstances brought him here, but we do know that as far as his time on television is concerned, for Jamie, “the lust stops here.”

Now it’s one thing for Jamie to be eliminated from the reality world circuit, but quite another to be rejected from the one thing he’s truly good at; not only does Manchester not want him back, but as his agent quite clearly lays out, absolutely no one wants him despite his talent. It’s a mildly gratifying turn of events, really. Jamie needs to do better, but it’s clear that his egoism—coupled with his secretly broken child-like heart—will likely never allow him to do so until he reaches rock bottom. With the canyon floor quickly rising up to meet him, Jamie finds himself having to come to terms with a few unpleasant truths.

In Richmond, meanwhile, Nate is still being quite harsh to young Will. While it feels like an unflattering branching off of his fairly anxious nature, one can only hope that his better self will eventually prevail. The fascination with Dr. Fieldstone continues, as she makes her grand entrance to work via a rocking super bike thing (Keeley: “That’s not a bike, that’s a transformer!”). That is until Ted comes to the realization that she’s been officially hired for the length of the season. He criticizes Leslie for making the hiring decision, though he quickly realizes that it’s ultimately not his decision to make. In trying to accept that Dr. Fieldstone is going to be a long-term fixture at AC Richmond, Ted turns that mustache frown upside down and goes to work on endearing himself to Dr. Fieldstone, notably using the oh-so mighty hammer and chisel he first used to work on cracking Rebecca’s heart: THE biscuits in THE signature pink box. He watches Dr. Fieldstone begrudgingly accept and finally bite into the crumbly treat with just the tiniest hint of smugness, sure of his impending victory until she says, “That’s very thoughtful, Coach Lasso. But I don’t eat sugar.”

He tries a different, far less subtle, tactic by trying to launch off a book discussion (which, Ted, The Fountainhead is your favorite book? Really?) before it’s immediately run off the rails by Dr. Fieldstone, who immediately calls him out for his almost desperate need to connect with people. It’s an intriguing development, because as we watch Ted’s face fall, it suggests that not only did Dr. Fieldstone hit it on the head, but that Ted’s immense amiability is, to a small extent, kind of a put-on. That’s not to say that it’s a bad thing, per se, as we all craft some sort of presentation to people, especially those whom we aren’t close to yet and are still unsure as to how they feel about us. What this does do is allow the show to continue building on the more shadowy depths of our titular protagonist that we’ve only really had a peek at thus far (specifically the brief dive into his mental health issues in season one).

Thankfully, Ted has a sympathetic ear in Rebecca who, after noting that a bite of her cherished biscuits is clearly missing, affirms Ted’s belief that therapists are unnecessary. “Why pay someone to do what a friend should do for free?” Ted asks. “Exactly,” Rebecca says. “I mean, that’s why you have friends, isn’t it? To burden them with your issues and anxieties, right?” OK, so a sympathetic ear does not necessarily make for the best counselor. I would take a bullet for these two, but their attitude isn’t correct in the least, but hey, I’m looking forward to watching those crazy kids work those issues out.

At a nearby cafe, Keeley stops for a beverage when lo and behold, her old flame Jamie Tartt appears. Granted, it’s from behind a wood post with sunglasses on with him looking every bit like a creeper. After insisting that he isn’t stalking her (“I’ve been following you for a few blocks now”), he divulges his recent woes before asking her offscreen the one question that I’m sure every viewer could see coming from a mile away which is, of course, to get a spot back on AC Richmond.

Speaking of footballers who are trying to better themselves, everyone’s favorite grump-grump Roy still wants nothing to do with football (save for the girls’ team he coaches) or AC Richmond. After the girls lose the last game of the season and Roy crabbily tosses the consolation trophies provided, he arrives at Keeley’s home which they now appear to share. After calling out for Keeley, he goes searching for her only to find her having a rather, ahem, intimate moment with herself. Understandably amused (“Were you having a wank?”), he asks to see what it was exactly that she was using to fuel her arousal. If you are anything like me, this is when the wincing commenced, because we were definitely being led to believe that Jamie Tartt’s face was about to appear on the phone screen.

Thank goodness what we actually get is SO much better. What comes on screen is a video of Roy, but not just any old video: it’s Roy’s press conference where he formally announced his retirement and is practically sobbing. It’s a sensationally funny one-two punch of watching Roy break down along with the newfound knowledge that Keeley gets off on feelings like some emotional sex vampire. The conversation then turns to the football pundit gig again, as Keeley believes the surest way for Roy to be truly happy again is to be professionally involved with football somehow. His Growliness finally agrees and with that we get to look forward to a new, profanity-laden chapter in the Roy Kent saga.

Meanwhile, Ted is helping himself to dinner at the neighborhood watering hole, The Crown & Anchor, when Jamie walks in, clearly following Keeley’s directions to ask the coach himself. It takes him a minute to get there, but Jamie gets completely honest with Ted and tells him flat out, “I need Richmond.” Some may chalk this up to Jamie simply needing employment, but I fully believe it’s deeper than that; his time with Ted and the valuable lessons in teamwork touched him. After looking everywhere else for happiness, it’s become clear to him that knuckling down and working alongside this team is his best chance at living his best life. However, just because something’s ideal for you doesn’t mean it works for other people, despite whatever good intention you may have, which is why it’s not all surprising when Ted tells him no.

Well, not surprising to us viewers at least. However, for the gentlemen of AC Richmond, it’s easy to assume that Jaime’s coming back, thanks to the pictures of Ted and Jaime’s meetup that inevitably made the rounds on social media. Sam is the most perturbed by this news, having bared the brunt of Jamie’s bullying. So much so, in fact, that Sam gets outright pissed at Ted during practice and proceeds to walk off the field. Ted assures him that Jaime isn’t coming back, but in a surprising turn, later decides to reconsider. Admittedly, this change of heart caught me off guard, but after hearing Ted’s impassioned speech on exercising compassion and allowing for second chances, it’s easier to understand his position, even if it’s unclear if it’s the right decision to make. The complex feelings surrounding his return are apparent when Jaime, to the surprise of nearly everyone, walks out onto the field during practice.

It’s still early yet to see exactly where the big arc of this season is heading. Roy’s position on television—as well as the one on his knees between Keeley’s thighs, BOOM!—seems poised for success. Ted’s making some tough decisions, but he’s happily made some in-roads with Dr. Fieldstone (who gets to be “Doc” now, huzzah). Unfortunately, there’s a good chance he’s taken a step backward with his players, now that Jaime is officially back. I’m eagerly awaiting more meaty material for Rebecca, though with all the multi-tasking the show is starting to do, there may be a chance that Rebecca’s struggles are going to take a bit of a backseat this season in order to make room for team members like Sam, who seems poised to take a little more of the spotlight (as he deserves!).

[Ted riding on the back of an industrial mower]
Keeley: What is Ted doing?
Roy: Probably homesick. Closest thing he can find to a Dodge Ram.

Ted: Nice to see you, Jaime. Take a seat. How ya been?
Jamie: Uh, awesome. The best. Pretty good. Okay. A little depressed. It’s all shit, Ted.

Ted: ‘Cause people say cuss words when they don’t know the right ones to use to express themselves. Except Bernie Mac. You know, he uses them like van Gogh uses yellow: effectively.

Kaleena Rivera is the TV Editor for Pajiba. When she isn’t wondering what the hell kind of bike the Doc was riding (answer: it’s a Brompton bike and it retails for about $1,500, holy cow, that’s more than I paid for my first car), she can be found on Twitter here.

← With 'Jungle Cruise', Disney Continues to Stumble with its Paltry LGBTQ+ Representation | The Success, Failure, And Success of 'Lovecraft Country' →