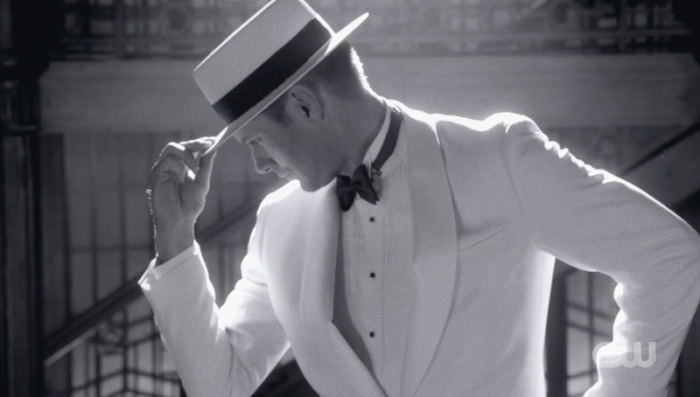 I know, I know — it’s been awhile since I’ve popped in to discuss the best show on TV that doesn’t star a baby Jedi. Supernatural’s victory lap final season has been chugging right along, and there has been plenty of plot that I probably should have been discussing each week, like:

— The boys have gone to Hell, and to Purgatory!

— Rowena is totally fine being dead, because she’s the new Queen of Hell!

— Eileen came back from the dead, and Sam has the hots for her!

— The long-forgotten third Winchester brother, Adam, finally popped back up after being released from the cage, and now he’s possessed by the archangel Michael but it’s totally cool because they’re buds!

— Chuck, who is God, showed Sam what the future looks like without Him, and it turns out that without God around the monsters take over? And Sam and Dean turn into vampires? And then Dean kills Sheriff Jody and Bobby kills Sam? But like, God/Chuck is a writer, which means he’s a liar, so Sam shouldn’t have believed any of that…

— … so obviously Sam in fact DID believe all of that, and totally borked their one shot at trapping God.

So yeah, a lot’s been going on! Yet none of it compared to the absolute magic of this week’s episode, which was hands-down the best of the season because it gave our boys some real challenges, like:

— … and an underground fight club full of monsters.

Basically, since their last confrontation with Chuck, it appears that Sam and Dean are cursed… with normalcy. Gone is Sam’s perfect health and Dean’s iron stomach. Even Baby breaks down! The boys have always dwelled on all the tragedy Chuck dumped onto them for being his chosen “heroes” — but they never realized the benefits that came along with being His favorite playthings. As Garth put it — now that their luck has run out, they’re “super-boned.”

That’s right, the always lovely DJ Qualls returned as the hunter/werewolf/hugger Garth this week, to fix Dean’s cavities and blow up that monster arena for them. While they flounder, he steps up and saves their asses — while also demonstrating exactly how totally OK it is to be normal, what with his nice suburban house, array of cardigans, and twin baby boys named “Sam” and… “Castiel.” On one hand Garth was just another familiar face dropping in for a fond farewell this season, but his appearance was made all the sweeter because, just earlier this month, Qualls announced that he’s gay. The actor has drawn parallels between his character’s growth and acceptance on the show and his own journey in life, which made the episode even more meaningful in some ways. If this is the last we see of Garth, it’s also the best we’ve seen of him. He’s happy. He has a family. He saves the day. And unlike so many of Sam and Dean’s friends, he still alive to enjoy it. Not too shabby for a guy who almost turned the part down because the Winchesters were too hot!

In this topsy-turvy episode, Garth was able to become the hero while the boys suffered through a series of Looney Toons-esque pratfalls and gastrointestinal indignities. Throw in some old school sitcom soundtrack cues, an Ocean’s Eleven rewind reveal, and even a tap dance routine, and this will probably wind up being the last “meta” episode of the show.