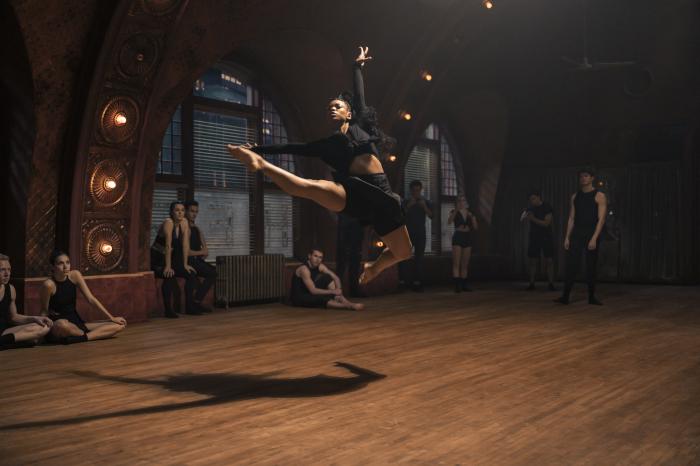 Stream It or Nah: 'Tiny Pretty Things' Is a Disaster

Tiny Pretty Things opens with a fall. It’s very dramatic. Cassie Shore (Anna Maiche) stands on the ledge, laughing while she does a few twirls and fancy footwork. She looks like she might jump, but she doesn’t. Before long, a stranger in a gray and red hoodie appears with a white rose. The pair obviously know each other, but it’s clear something bad’s about to happen. A quick run and shove sends the ballerina right over the ledge and straight to the ground. The moment was enough to elicit a gasp just as the opening sequence plays.

The story goes downhill after that and it’s a damn shame because Tiny Pretty Things, which is based on the novel by Sona Charaipotra and Dhonielle Clayton, had so much potential, most of which is squandered by terrible dialogue, subpar acting, a convoluted plot, and superficiality disguised as depth. The students are friends and enemies, rooting for each other when it’s convenient, but immediately turning on each other in competitive fits of rage. This makes it hard for any of the characters to actually form close and healthy relationships with each other. They’re so busy trying to be the best while dealing with verbally abusive teachers to think about anything other than themselves. The plot and its twists get to levels of complete and utter incompetence and the gratuitous and excessive sex scenes, which aren’t all that great, take a lot of time away from building deep character relationships.

Cassie’s fall leaves her in a coma and the open spot is filled by Neveah (Kylie Jefferson), the only Black ballerina whose arrival at the Archer School of Ballet causes tension with Madame Monique Dubois (Lauren Holly), the head of the school who is both a racist and a pedophile. Neveah is quickly folded into the students’ drama on top of her attempts at making a name for herself, maintaining her scholarship, and reigning in the anger she has at her mother, who is serving time in prison. And there is so much drama that it’s hard to keep track of.

There’s June Park (Daniela Norman), who feels like an afterthought on the roster of ballet favorites, but decides to emancipate herself from her mother’s control; Bette (Casimere Jollette), a privileged legacy ballerina who feels the sting of pressure while trying to live up to her big sister; Nabil (Michael Hsu Rosen) is honestly fine for the most part, but his biggest flaw is that he is in love with the comatose bully Cassie; Shane (Brennan Clost) is defined by his sexuality and takes advantage of people while victimizing himself (though the show definitely doesn’t paint him in that light); Oren (Barton Cowperthwaite) struggles with body dysmorphia and bulimia and lies to Bette about sleeping with Shane; Ramon Costa (Bayardo De Murguia), who thinks it’s OK for teenagers to bring Jack the Ripper’s story to the stage while sleeping with underage teens and shaming them for not being perfect for his dance; and then there’s Madame Dubois, who does every horrid thing imaginable to keep the Archer from bad publicity and closure by soliciting the ballerinas to an elite club in exchange for large donations to the school. Oh, she often sleeps with underage teens while promising them certain privileges.

It’s pretty bad, but the series is made even worse by the fact that it doesn’t bother to analyze exactly what’s wrong with such behavior and offers no scathing commentary or criticism of its characters’ actions. In the few instances that it does, the consequences don’t last very long and are merely used for shock value. It’s like Tiny Pretty Things is saying, “Yes, ballet and pressure does push people to commit terrible acts, but that’s alright because it’s worth it in the end.” It’s not, and the series gets away with such heinous storylines because it thinks itself smarter than the shallow melodrama that it actually is.

All this to say that Tiny Pretty Things is a MESS. It’s Black Swan meets Pretty Little Liars, with a dash of Big Little Lies, only somehow far less entertaining. The characters are there to drive the plot instead of the other way around, any forward movement made on the non-murder mystery is quickly forgotten for plot convenience, and the drama is so frustratingly contrived that it was hard to watch this show and still be amused by its nonsense. The series is also full of stereotypical writing and implicit bias. In the book, Neveah, whose name was changed from Gigi, has a free spirit and a heart defect, which affects her dance career.

That could’ve made for some good drama on the show, but nope. The Tiny Pretty Things writers had to go and change Neveah’s backstory so that she could be angry at her mother, who is in jail for defending her son from an abusive boyfriend. Why change a perfectly decent backstory from the book to a racist trope? And then there’s the blatant Islamophobia from Caleb (Damon J. Gillespie), who hates Nabil (Michael Hsu Rosen) because his “people” killed his dad who served in the U.S. military. Caleb is cruel to Nabil because of this and makes his life a living hell for a while, even going so far as to physically shove him in public just because he could. Nabil never even gets to defend himself against Caleb’s false accusations because Muslims are easier to blame for all things according to Americans.

The series also does the bare minimum to address the teachers’ abusive behavior, which includes, but is not limited to body shaming, emotional manipulation, and verbal abuse. And don’t even get me started on the person who pushed Cassie over the ledge or the stalker detective who racially profiled students for the case. Then there’s Neveah’s weird attachment to the comatose ballerina despite having never known her at all. I could go on and on, but I’d be writing all day. Ultimately, Tiny Pretty Things was a disappointing disaster that prioritized its lackluster mystery over the characters and their development, offered clunky dialogue and pacing, all while relying on awful stereotypes to create tension.