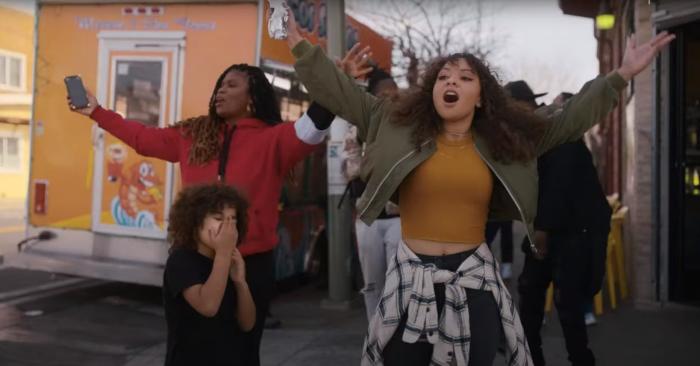 Starz ‘Blindspotting’ Review: The Movie’s Best Character Gets Her Own Series

I’m going to say something that probably won’t get me much love around these parts: I don’t have much affection for the 2018 film Blindspotting. I won’t go into the various reasons why the movie didn’t quite work for me. What I will say, however, is that I was excited to see that the Starz series spin-off of the same name was going to center around one of the best characters in the film, along with an extended deep dive into some of the cultures and issues affecting the historically Black city of Oakland, California.

In the show’s opening, Miles (Rafael Casal) gets his thick-headed self thrown in jail on a drug charge for an as-of-yet unknown amount of time. With long-time girlfriend Ashley (Jasmine Cephas Jones) unable to afford the rent on her own, the only solution is for her and their six-year-old son Sean (Atticus Woodward) to move in with Miles’ mother, Rainey (Helen Hunt, in full Helen Hunt Mode) and sister Trish (Jaylen Barron). Now finding herself facing an uncertain future without her partner, not to mention the drama that comes with living with extended family, Ashley has to learn to cope with her new circumstances.

Much like her role in the film, Jones is a shining, yet grounding force, though here we now have the benefit of getting a greater insight into the charming Ashley. It’s that very same affability operating alongside a multi-layered understanding of the world that engages the audience and makes it incredibly easy to root for her. Unfortunately, her willingness to rely on a man, especially Miles, of all people, is probably her greatest foible. As Miles is led into the back of a squad car, Ashley thinks to ask, “What’s our online banking password?”

But like many women who are hellbent on loving a man despite their ability to do far better, Ashley’s loyalty is unwavering. Thankfully, there’s a small safety net provided by Rainey, who shows no sign of hesitation when it comes to opening her home to her grandson and his mother. Hunt is, unsurprisingly, immediately endearing as an old-school feminist who walks the line of nourishing women’s liberation while also trying to observe a reasonable measure of social norms. When the scantily clad Trish objects to being commanded to wear pants despite her enjoyment of her “well-ventilated coochie,” Rainey, in the most motherly fashion possible, responds, “Honey, I love your coochie. It came out of mine. But I don’t need it to be the first one your nephew sees!” Moments like this are good for a chuckle, despite the fact that Rainey feels just a smidge too cool to be believable (but since it’s national treasure Helen Hunt, it hardly matters all that much).

Trish, on the other hand, is of the fourth-wave feminists. Like many twenty-something-year-old women who are currently exploring their place within the movement, there’s a stumbling youthful eagerness in her process. Intent on being a sex work tycoon of sorts, Trish currently operates an Only Fans-esque service out of her mother’s living room with her crew (“I’m Trappy Leibovitz, they are my rock star muses,” she rhapsodizes to Rainey) in the hopes of eventually opening a co-opt strip club. It all sounds well and good in theory, but as the more experienced Rainey points out, Trish quite literally doesn’t bother to do the reading when it comes to women’s liberation, along with the other feminist-based texts that provide the groundwork for her progressive ideals. She provides an interesting dynamic against Rainey, as well as a point of tension for Ashley, as the two have little love lost between the two of them. Barron is wholly believable in the role, and although Ashley is the reason viewers tune in, Trish may be the reason why they stay. Like her brother, she’s equal parts lovable and enraging. Whatever revolution her character may undergo over the course of the season, it’s sure to be fascinating as hell.

Like the film, the show maintains a similar aesthetic (though film director Carlos López Estrada does not return for the series) with its theatrical flair. There’s stylistic flourishes designed to inform viewers of the people and culture that reside in Oakland. Movers haul boxes while free-style dancing. Our lead goes into random bouts of spoken word. Whether or not this entirely works is going to purely be a case of “your mileage may vary.” I prefer that certain elements, especially those that convey emotions and motivation, be handled with more subtlety, but there’s absolutely a fervent audience for this storytelling method. If you count yourself among those who loved the film, the Blindspotting series is pretty much a sure bet. Even if you aren’t [waits for other people to join me on the bench], the show seems intent on expanding the elements that worked so well in the movie (though the movie is not required viewing to follow along with the show’s plotline). With only one episode currently available, it’s impossible to tell what direction this will go in, though I’m confident that wherever it heads will be entertaining. Perhaps more importantly, Blindspotting provides a little-seen perspective of a city that, like Ashley herself, is rapidly changing against its wishes.

The first episode of Blindspotting is streaming on Starz, with episodes airing each Sunday.

Kaleena Rivera is the tv editor for Pajiba. When she isn’t wondering if anyone gets that character stuck on house arrest that burrito he keeps begging for, she can be found on Twitter here.