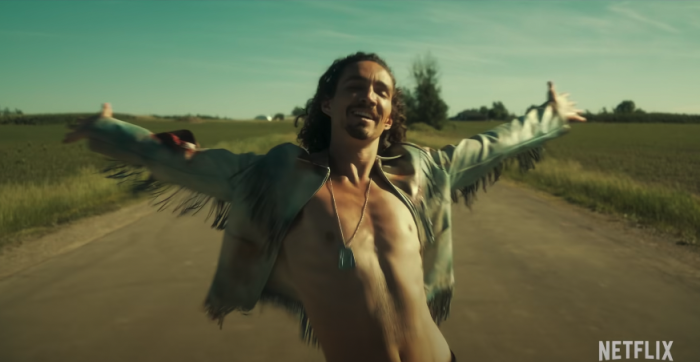 Spoilers: The Shake-ups At Netflix Better Not Cost 'The Umbrella Academy' Its Fourth Season

The world is ending, and the super-powered siblings of The Umbrella Academy are the only ones who can stop it … if they’d just stop drinking and arguing and generally f*cking around long enough to focus. That is the premise of the hit Netflix series, rinsed and repeated every season — and improbably it keeps getting better. But before I get to that, let me just share with you this scene, which occurred within the first twenty minutes of the season three premiere and for a brief, shining moment brought my tastes and those of bossman Dustin into joyous agreement: The hallucinatory “Footloose” dance-off!

If you’re reading this review and haven’t ever seen the show, that right there is what you’re missing. That’s The Umbrella Academy’s sweet spot. It’s the “Nero fiddles while Rome burns” of comic book shows, where no stakes are so high that they can’t be interrupted for a sardonic comment and a round of karaoke. Even when the show’s plot sometimes gets a little too repetitious, the delightfully dysfunctional Hargreeves siblings provide all the reason you need to keep watching. So imagine my surprise when the show returned for a third season that not only kicked off with THAT BANGER right there … but then proceeded to deliver a new kind of apocalypse, a new set of siblings, and generally find fresh new ways to complicate its laughably simple premise.

After saving the world during their detour in the 1960s, the Hargreeves finally make it back to the present — only to discover that their antics in the past have changed the timeline. Not only did Reginald Hargreeves decide to adopt a completely different set of seven super-powered babies — raising them to be the highly capable Sparrow Academy — but in this new timeline, our heroes were never even born. Oh, and all the timeline changes have caused a kugelblitz to form which is going to destroy the universe anyway. So Luther, Diego, Allison, Klaus, Number Five, and Viktor decamp to the mysterious Hotel Obsidian to either come up with a game plan or wait out the end of the world in style, depending on how the mood strikes them.

If I had to point to the biggest improvement The Umbrella Academy made this season, it would be in the character journeys. When a show relies so heavily on the charisma of its characters, allowing them to experience meaningful change can be risky — but then again, so is stagnation. Season three finds Luther finally getting over his crush on Allison and finding romance — and marriage! — with a Sparrow named Sloane. Diego becomes a dad, then finds out he’s not a dad but also that he WILL BE a dad. Five comes face to face with his own mortality, while Klaus discovers he is, in fact, functionally immortal. Allison takes a dark turn as two seasons’ worth of heartbreak and trauma catch up with her. And then there’s Viktor, whose transition was inspired by the real-life transition of actor Elliot Page. Viktor’s journey to his authentic self may be the most obvious example of this season’s character growth, and there is a truly fantastic Hollywood Reporter interview with Page, showrunner Steve Blackman, and writer Thomas Page McBee where they detail the process of crafting that journey and the family’s acceptance that I highly recommend reading if you’re interested. But one thing I think is worth emphasizing is that Viktor’s transition is not the sum total of his journey this season. Just before he comes out to his family, he has a clandestine sit-down with the leader of the Sparrow Academy, Marcus, and displays the sort of confidence we haven’t seen from him before as he owns the full potential of his powers and uses it to negotiate. That confidence is Viktor’s real through-line this season — it’s what allowed him to embrace his true self, and is exactly the sort of growth the character needed to take plot-wise (after two seasons of almost being the cause of the end of the world). All those facets came together in a beautifully natural way.

Still, the show is at its strongest when all the siblings are together on screen, and season three made sure to keep the family united by giving them a common sort-of enemy in the Sparrow Academy. The big twist is that their dead brother Ben is alive and well in this timeline, and he’s kind of an asshole — a fact that doesn’t seem to deter the Umbrellas for long (in fact, Klaus’s constant attempts at bonding with the disgusted Ben prove to be a highlight!). Their father, Reginald, is also still alive, and it’s his machinations that bring the season into its brilliant climax. I want to talk about that ending, because it sets up a complete paradigm shift in a potential fourth season that, as usual, Netflix hasn’t yet greenlit. And given the troubled state of the streamer, it’s a fourth season that may never happen.

If the Hargreeves family is dysfunctional, then most of their issues are rooted in their father. It was always clear that he organized the Umbrella Academy, and then the Sparrow Academy, not out of love or altruism but to achieve his own ends — and that hidden agenda finally comes into focus as the true nature of Hotel Obsidian is revealed. Reginald built the hotel around a secret portal that connects across time and space to another place — Hotel Oblivion — where seven heroes are needed to overcome mythical guardians and activate… something. Hotel Oblivion is itself a universal fail-safe, a machine added to the construction of the cosmos like a giant reset button in case of emergencies. We learned last season that Reginald is an alien, and this season we learn that his wife, Abigail, is held in stasis on the moon (and Luther spent so many years stationed there to guard her, without his knowledge). Reginald designed his academies not to fight crime, but to someday go to Hotel Oblivion and help him reset reality to bring her back — and his plans become all the more urgent as the kugelblitz gets closer to destroying everything.

First, though, he bonds with Klaus — by killing him a lot. Klaus doesn’t only have the ability to channel the dead, he can die and come back to life. Reginald helps him recognize and hone his talent by playing catch with him in traffic, and eventually Klaus is able to revive in under a minute. It’s a demented and hilarious scene that seems to be setting Reginald up as a misunderstood patriarch, when in fact it’s a precursor of what’s to come. Despite Klaus’s insistence that Reginald has changed, his siblings, along with Sloane and Ben (the rest of the Sparrows at this point have died), vote to let the world end rather than trust their father and his secret plan. So Reginald kills Luther and stages it to look like the work of one of Hotel Oblivion’s guardians, and uses the confusion to get his kids through the portal. They take out the guardians for him, and they activate the machine — which runs on the particles of their being. His plan was always about sacrificing his kids, but the one exception he made was Allison. He promised to bring back her daughter and her husband, lost in the various timelines if she helped him reset reality — but when she sees her siblings dying, she kills Reginald instead. It’s not enough to stop the machine, however, so Allison presses the reset button herself …

And everyone (even Luther!) arrives safely in a new, rebooted reality. One where they no longer have superpowers, and where Reginald — and Abigail — are alive and running a massive corporation. The last shot of the season sees the Hargreeves siblings splitting up, walking away from each other and into their new lives as normal people, though an end-credit scene reveals a potential complication: Ben — another version of Ben, local to this reality — riding the subway in Korea. In this new reality, Reginald didn’t have a reason to adopt the children, so they seem to have doppelgängers out there waiting to be discovered. And Reginald, reunited with his wife at long last, likely has turned his sights to other nefarious plots that only his former wards would recognize.

The Umbrella Academy as we know it is no more, but what comes next is anybody’s guess. The series has never hewed too closely to the Eisner Award-winning comics by Gerard Way (from My Chemical Romance) and Gabriel Bá, but after three seasons it has blown through most of the source material (not to mention the fact that in the comics, Hotel Oblivion is a supervillain prison, not a reality restart). Blackman seems to have a close relationship with Way, and I believe he knows the general direction the comics could go in the future, but at this point I think the show would be mostly on its own if it continued. Add to that the fact that three seasons is kind of a magic number for Netflix — a tipping point in terms of creative fees and subscriber value — at a time when the streamer is already facing financial woes of its own making and rethinking all of its strategies. The Umbrella Academy is buzzy enough and gets plenty of viewers, but is it enough to balance how expensive it is, with its large cast, special effects, and catchy music licensing demands?

I hope so, I really do. Because it’s rare to see a show revive itself creatively the way this one has in its third season, and if we’re going to be inundated with comic books movies and TV shows anyway, we at least deserve one that doesn’t take itself too seriously. Even if they don’t have their superpowers, the Umbrella gang still knows how to dance!

← 'Loot' on Apple TV+ Has More Talent Than It Does Laughs or Depth | Reddit Asks the Question: 'What's the Dumbest Mistake You've Seen An Incompetent Co-Worker Make?' →