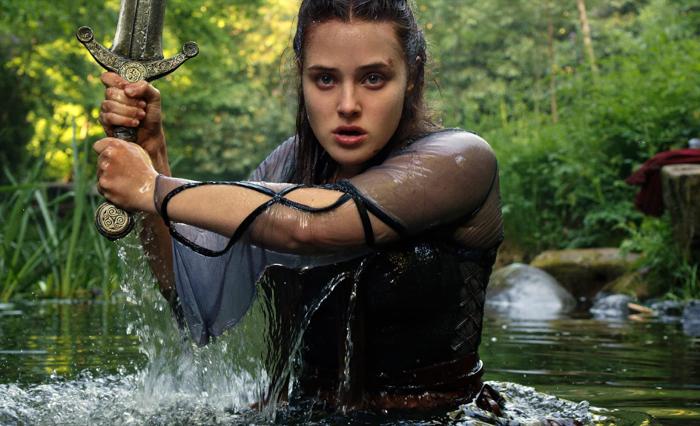 Stream It Or Nah: 'Cursed' Offers A Rocky Road For The Sword In The Stone

Spoilers For The Full Season Ahead!

Cursed, Netflix’s latest sword & sorcery romp, offers one helluva hook: “What if the sword chooses a Queen?” Only in this case the sword in question isn’t A sword, it’s THE sword — Excalibur. Kinda. The show never actually calls it that, come to think of it. And for that matter, the blade never really chooses a Queen at all. This remix of Arthurian lore places Nimue, the magical someday Lady Of The Lake, in the spotlight and hands her the legendary weapon with a catch: She’s just a delivery service to get the sword into Merlin’s hands. Then when it turns out that he doesn’t want the damn thing she just sorta holds on to it for awhile and declares herself a Queen.

At least until she falls into a lake and Merlin takes his sword back.

Yes, I’m oversimplifying, and yes there’s a lot more that happens in the series between point A and point B, but if you read that summary and thought “Wow, that sounds both intriguing and sloppy” then congratulations — you’ve just experienced the muddled mass of good intentions that makes up Cursed. The show isn’t without its charms, even if it never quite rises to its own potential, but its biggest stumbling block might be that it isn’t ever quite the show you’re expecting. The connections to the Arthurian legends we’re familiar with — lore that has been reimagined and retold countless times before — amount to little more than name-checking a few characters you’ll recognize from storybooks. It’s a wholly original tale, one that bears passing, superficial resemblance to Game of Thrones (a young woman rises to protect the downtrodden in a land torn apart by warring factions) and Netflix’s own The Witcher (a hero hated yet needed in equal measure for unimaginable powers) but is tonally completely different. There’s plenty of violence and a bit of gore, but the romantic elements are surprisingly chaste, perhaps because the series is based on a young adult novel… written by Tom Wheeler and comics legend Frank Miller.

Let that sink in: A chaste, female-fronted young adult fantasy co-created by Frank “Sin City” Miller. In an interesting move, Netflix picked up the rights to Cursed before the illustrated novel was even released, and Wheeler and Miller were brought on board as executive producers to guide their vision to the screen. A vision Miller himself, in an interview with Comic Book Resources, is careful to avoid labelling as a “feminist” retelling of the legend, instead saying it’s simply told “from a female perspective.” Whether he’s hedging his bets to avoid criticism or whether he knows the series misses the mark, I’m not sure. All I know is that feminism is a little more complicated than having your main character insist she doesn’t need protection countless times while several male characters… ignore her and try to do it anyway (looking at you, Arthur and Merlin and Gawain!).

Still, the show does succeed in centering Nimue (13 Reasons Why’s Katherine Langford) and several other women in the narrative, and makes room for them to have their own goals, volition, and conflicting moral compasses. Unfortunately, some of that complexity slides into confused characterizations. Nimue herself is hard to pin down — a young woman imbued immense power she doesn’t understand, for reasons that WE can’t understand either. She’s Fae, a member of a tribe of magic users who can call upon the Hidden gods and, in her case, strangle people with vines when she’s upset. Yet she was also scratched by a demon bear as a kid, and now her tribe shuns her as a bad omen — a witch amongst witches, or something? At first it seems like the bear is the reason Nimue’s powers are stronger than her kinfolk, until a late reveal shows that maaaaaybe it’s actually because she’s the secret lovechild of Merlin himself. The bear, it seems, had nothing to do with anything whatsoever. And remember how I said she sort of ended up with the sword rather than it choosing her? That’s because the sword isn’t just Merlin’s possession — it’s a manifestation of his mystical essence. Her connection to it, and her destiny, all comes down to her being his daughter rather than anything innate to her personality (in a bit of a Rey/Palpatine twist).

Morgana (Shalom Brune-Franklin) is another fascinating, frustrating character. Here she is Arthur’s sister, yes, but also a freedom fighter, a nun, Nimue’s confidante, and a woman tempted to form a pact with a sinister spider god in hopes of bringing her lover back to life. She is not, at any point, a sorceress in her own right, nor is she a villain — though the show cleverly plays with our expectations by giving her an opportunity to steal the sword away when Nimue entrusts it to her. Instead, she rushes back to Nimue to save her, and in the process finds herself confronted with a veiled death specter known as The Widow. When next we see Morgana, she… IS The Widow, because apparently she killed the god offscreen and took up the mantle for herself. It’s a cool story move, until you realize it also marks an anti-climactic end to her whole temptation arc. That, like the Nimue’s bear scratch, was set up to be the source of Morgana’s potential power. Episodes were spent developing her slide into the grasp of an evil god wearing her girlfriend’s face (yes, Morgana is gay!). And suddenly — OFFSCREEN — it’s all over. She’s Death now. None of it mattered.

I complain, but the fact is that the women of Cursed, for all their inconsistencies, are still far more interesting and nuanced than the men. Arthur (Devon Terrell) is a poor, handsome cutthroat searching for his honor. Uther Pendragon (Sebastian Armesto) is a king with no claim to his throne, allowing Red Paladins to commit genocide against the Fae on his turf while his “cousin” Cumber, the King in the North The Ice King, stages an invasion to overthrow him. Father Carden (Westworld’s Papa Delos himself, Peter Mullan), the head of the Red Paladins, is a bland xenophobic hate machine using his Church as an excuse. The only thing interesting about Carden is third-act reveal that his right-hand man and Fae-sniffing bloodhound, The Weeping Monk (Daniel Sharman), is himself a Fae orphan that Carden brainwashed to serve his crusade. And by the way, the Monk’s real name is Lancelot.

Merlin is the exception, as he by rights should be. Played with swagger by Gustaf Skarsgård, he’s a shirtless drunken charlatan who lost all his magic when he lost his sword. He knows the seductive danger wielding the blade poses, and so he wants to see it destroyed — or at least he did, until he finds out that the one carrying it is the daughter he never knew he had. Nimue wants to save the Fae, and she knows that the sword’s value isn’t just the power boost it gives to her — it’s a bargaining chip that Uther, Carden, Cumber, and all the other would-be Kings desire. It may make her a symbolic leader, but her desire for diplomacy over bloodshed is what makes her a Queen. Sadly, Merlin realizes that the sword has also put a target on his daughter’s back. No King can abide a threat to his dominancy, and the matter won’t be settled by just handing over the weapon. She’ll have to hand over herself as well. Merlin will do anything he can to keep her head from the chopping block — regardless of what it may mean for the fairy folk or the rest of the kingdom.

The show takes awhile to find its footing, and early episodes seem riddled with wheel-spinning plot diversions and some painfully poor action (intentional though it may be when Nimue is fighting, since her whole schtick is that the sword does the work for her). It takes time to establish all the various political power struggles at play, but it comes at the cost of some necessary world-building in other ways — especially the rules of magic. “Fae” is a large umbrella, a catch-all for people like Nimue, who can use magic, and her brethren who ARE magic, like the Tusks or the Snake People. Are the Hidden a different sort of spiritual entity from Bear, or that weird underground leper king Merlin steals from? And what even IS Merlin, anyway? I don’t know! A lot about the show is casually, nonchalantly presented (especially its own cast diversity), but that same attitude is applied to elements of the story I could have used a firmer grasp on. I will say, though, that if you manage to stick around to the last episode you’ll get the sort of finale that almost makes it all worth it. An ambush on a beach leads to a large-scale battle to save the Fae survivors, with Arthur leading the charge, while ten episodes worth of foreshadowing finally pays off as Nimue is confronted on a bridge by a religious zealot named Sister Iris (a seriously creeptastic Emily Coates) and shot full of arrows. As Nimue plunges into the lake below, Merlin finally — FINALLY — takes up his sword again and starts zapping all the Paladins with lighting from his fingertips, before he scoops up Widow Morgana and transports them both… somewhere.

So… is that all there is to it? Is Cursed over? Probably not. As expected, the season is faithful to the events of the novel, and I’m not sure if there’s a sequel novel in the works or not. Also, Netflix always waits a few weeks to announce whether they’ve renewed a season, and I doubt this will be any different. Still, I think Cursed made its intentions pretty clear in the very first episode, when Nimue encountered a baby dear that offers her a message of warning from the Hidden: “Death is not the end.” The fact is, we see Nimue plunge into the waters but we don’t really see her die. Why would she? She’s gonna be the Lady of the Lake! Merlin and Morgana are out there, all super-powered and angry and with a sword everyone is still going to want. Arthur has the Fae on his side but is nowhere close to be a King yet, and for that matter things aren’t exactly settled between Uther, Cumber, or the Church from what I can tell. Meanwhile, the Pope has anointed Sister Iris (scarred from Merlin’s bolts, but still very much alive) as his own avenging angel, and she’s all set to take over for Father Carden and continue trying to destroy all magic. Hell, we just barely found out that Lancelot is Lancelot! There is no way this show doesn’t continue, and based on that season one finale I’ll definitely tune back in to see more. However, if someone told me they’d given up on the show halfway through the season, or halfway through the pilot… I can’t say I’d blame them.