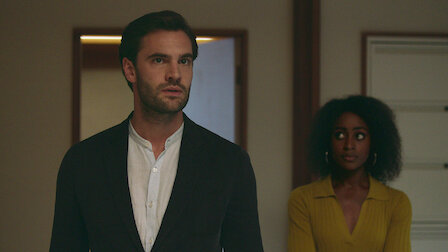 Netflix’s ‘Behind Her Eyes’ Review: This S*** is Bananas

The psycho-sexual thriller, once a mainstay in the 90s, hasn’t gotten quite as much recognition over the last ten years, especially as psychological thrillers/horror has trended more towards themes such as fame, parenthood, and race. There have only been a few recent notable entries that have gone on to gain any sort of popularity (the Netflix series You comes to mind, though I must admit to not having seen it) with most falling by the wayside, largely into the once-dreaded realm of VOD. In this regard, Netflix’s Behind Her Eyes, based on the 2017 book of the same name, is a fascinating entry into the genre. It was only made widely available for streaming on the 17th, but it’s already generating a lot of buzz and for good reason: It’s fucking bananas.

Before I try my best to package this shooting star of a spectacle, let’s get the summary out of the way: single mother Louise (Simona Brown) heads out for drinks with a friend who proceeds to cancel and winds up quite literally bumping into a man who looks like he stepped out of the pages of a romance novel. The two spend the night flirting before stealing a quick kiss, only for the mystery man to quickly depart, presumably never to be seen again. That is, of course, until the next day, when Louis arrives at her job where she works as a part-time secretary at a psychiatric office. The new doctor has arrived to tour the office and to not a single viewer’s shock, it is the same mysterious man who awkwardly fled their otherwise lovely evening. His name turns out to be David (Tom Bateman), and he is not alone, as he has also brought along his lovely young wife, Adele (Eve Hewson). Upon realizing that she has essentially had a date with her new, very married boss, Louise is understandably horrified. Once David realizes who his new secretary is, the two decide to simply write that night off as nothing more than a moment’s weakness and agree to move forward in a purely professional capacity.

Of course, these two are clearly fated to bone. The only surprising thing is how long it takes. Soon the two begin carrying on a torrid affair, but things get complicated early on when Louise bumps into (yes, another collision) Adele, who quickly takes a shine to her, much to Louise’s consternation. Soon Louise is spending as much time with Adele as she is with David and quickly finds herself enmeshed in their marriage. As the lies begin to grow, she becomes increasingly unsure of what the truth is, and as she falls deeper into their twisted past, her life begins to fall apart.

The show is engrossing from the start, due mostly to the fact that David and Louise’s blatant attraction for one another has a voyeuristic feel, especially once their relationship turns physical. Tom Bateman is alluring, though the prolonged smoldering eye contact is over-relied on, and the line between sexy and creepy is very blurred, even before things start going completely sideways. He’s effective when it comes to being terrifying when he sets that glare to ‘murderous’ and pairs it with his considerable height as he looms over others. Arguably, the most damning thing about the show is that it gives David far more grace than that character deserves.

Simona Brown is sweetly appealing as Louise (it’s cliché, but the camera honestly loves her), even though the show gives her little internal life; she’s a simple portrait of a loving mother who’s also deeply lonely, whose greatest pleasure in life comes from either her son or one of her (many) glasses of wine—no, seriously, I haven’t seen this much wine drinking since Scandal finished its run—and little else. It can be argued that this itself provides the necessary insight into why she becomes so involved with David and Adele. With that said, if there is any major takeaway from this series, it is that minding your own business goes a long way towards your own personal well-being.

Ultimately it’s Adele who’s the most interesting person to watch, though less so when the show goes into one of its many flashbacks, detailing Adele’s time in rehab a decade earlier and her relationship with Rob (Robert Aramayo), the friend she makes at the facility. Once in present day, much of the show’s intrigue comes from the challenge of pinning down whether she’s a fragile woman being gaslit by a controlling husband or a master manipulator. Hewson could easily have gone full ham in a role like this, but she thankfully gives a more measured performance instead, leaving the story to do the work of raising our collective eyebrows.

Speaking of eyebrow-raising, there’s the matter of that ending, which will surely go down in television infamy. It’s been sixteen hours since I’ve seen it, and I’m still wavering between utter bewilderment and begrudging admiration. It takes a lot to swing that hard for the fences and while it doesn’t work per se, it’s not every day we see this kind of daring. It would be interesting to see how it would work if some of the elements that led up to it were fleshed out a little more, but even then it would still be one of the most out-of-left-field developments I’ve ever seen.

If you’re curious about all hullabaloo around the ending, but have zero desire to watch or just enjoy spoilers for the hell of it, here it is (highlight white field below to read text):

Adele is aware of the affair because she has the ability to astral travel (i.e. as she sleeps, her consciousness can float around elsewhere). Louis inadvertently learns to do it due to the book Adele gave her to “help her sleep,” which was written by Adele’s old friend, Rob. In the finale, when Adele sends a text strongly implying that she’s going to kill herself, Louis races to stop her. Once outside the house, she calls upon her newly-acquired astral travel abilities to look in on Adele, who is laying in a heroin-induced stupor on the bed, as a fire begins to rage in another part of the house. That’s when Adele’s astral travel spirit rises upward and descends into Louise’s unoccupied body, which then forces Louise into Adele’s body. Adele-now-Louise then kills Louise-now-Adele via heroin overdose, takes over her life, and proceeds to get David back. Then in the last five minutes, it is revealed that Adele-now-Louise, is, in fact, ROB, who killed the original Adele in the exact same fashion, ten years earlier.

Granted, it’s only February, but Behind Her Eyes will almost sure be the year’s most WTF show. If you want logic and reasoning, I fiercely urge you to look elsewhere. But if you’re in the mood to crack open a bottle of wine, enjoy some steamy sex, and get your mind blown in one of the silliest ways possible, it’s a highly entertaining ride.

Behind Her Eyes is streaming now on Netflix.

Kaleena Rivera is a tv and film writer. When she’s not looking up Tom Bateman’s height (6’2”, huh, seems taller), you can find her on Twitter.

← 'The Silence Of The Lambs' 30th Anniversary Of When Hannibal Met Clarice | Regé-Jean Page Hosts 'SNL,' with 'Driver's License,' 'Loco,' and Pete Davidson Moves Out →