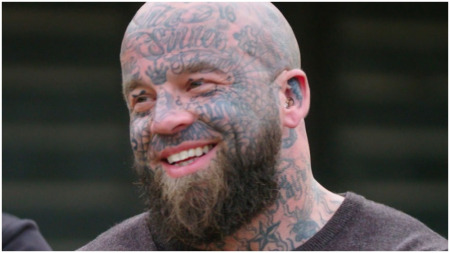 Sky History Cancels 'The Chop' Because Of The Nazi

After airing just one episode, The Chop: Britain’s Top Woodworker has been canceled because of the Nazi in its cast.

The English reality-TV competition was intended to spotlight 10 woodworkers and their talents in an entertaining series of challenges over nine episodes. However, Sky History screwed up royally when selecting Darren Lumsden as a contender. In a promo ad for the show, Sky History presented Lumsden as quirky because he’s friendly but COVERED IN TATTOOS! Immediately, people online began pointing out that several of the tattoos on Lumsden’s face were white power symbols. Sky History initially pushed back, basically insisting nuh-uh. Yet, audiences dared to believe their own eyes over the easily picked-apart lies of Lumsden and Sky History.

Now, Deadline reports “the series cannot return to screens because the symbols on Lumsden’s face ‘could be connected to far-right ideologies and could cause offence.’”

This story is one of profound ignorance and negligence on the part of Sky History. First off, Lumsden’s white power tattoos were prominent enough that viewers watching a brief promo on their phones could pick them out. Yet, the network didn’t think to run these symbols by anyone to make sure there wasn’t something concerning in the flesh mural? Then, when called out about the prominent “88” on his face, the network insisted they’d done background checks AND that Lumsden said the “88” did not mean “Heil Hitler,” but was a tribute to his father who’d died in 1988. Hilariously, news broke from the dad himself, who is not dead. Or even a hologram.

So, here we are, The Chop is chopped. That might mean Sky History learns a lesson about actually vetting the people it gives a platform. It might mean Lumsden actually comes to regret splashing hate symbols all over his face. However, I have sympathy for the other contenders. Their names have gotten way less press. IMDb doesn’t even have them listed. Now, they’ve been robbed of the chance to show their work to the world, and through no fault of their own.

It brings to mind Season 12 of RuPaul’s Drag Race, where a horrifying revelation about one of the queens came out after the show began airing. The producers pivoted hard, chopping Sherry Pie out of the show as much as possible. Considering she did well in the competition and had already been established as a contender to watch, this was no easy task. Frankly, sometimes these chops made for incoherent beats and a very clunky runway. However, the other queens weren’t punished for her sins. In fact, they arguably got more screentime as the editors cut away from her. On top of that, RuPaul’s Drag Race made a sizeable donation to the Trevor Project, in lieu of giving the disgraced queen prize money.

So, I’m left to wonder why Sky History went the route of canceling over recutting. Perhaps they felt this scandal had poisoned the well and there was no chance to recover. Perhaps they realized the cost of recutting the episode or attempting to blur out the offensive tattoos that litter Lumsden’s face wasn’t worth the cost. Perhaps Lumsden made it so far into the competition that it’d be too great a challenge to recut. Maybe he even won, which would make it impossible for Sky History to spin. For now, we’re left to wonder on all these points.

Still, the network should follow in the footsteps of Ru and crew and make a donation to charity. It’s the least they can do.

← Ray Fisher Calls Out Joss Whedon and Warner Bros. Once Again, This Time About Their Racism | Review: 'The Craft: Legacy' Is A Kinder, Gentler Sleepover Flick →