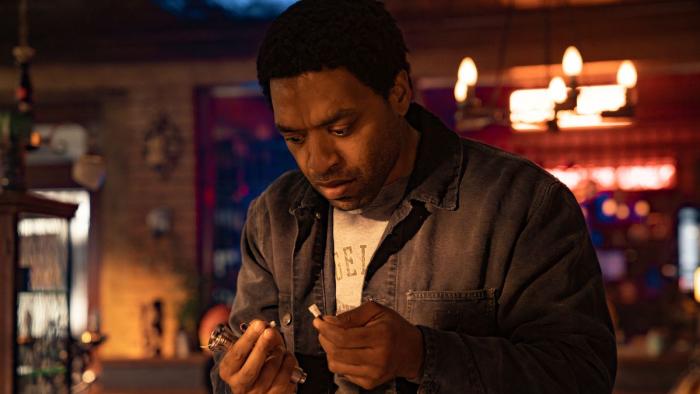 Showtime's 'The Man Who Fell To Earth' Fails to Land

Showtime’s new series, The Man Who Fell To Earth, continues the story of the 1976 Nicolas Roeg film of the same name, with a meta time jump forty-five years into the future. It isn’t necessary to have watched the original (its plot is summarized neatly in the third episode). It’s enough to know that, just as in the film, an endearing and well-meaning handsome alien lands on Earth, in search of water for his dying planet—and his strange mix of helplessness and technical brilliance becomes a mirror for the humans he meets and for humanity itself.

Chiwetel Ejiofor stars in the leading role as the alien explorer, who takes the name Faraday, with Naomie Harris as Justin Falls, a struggling single mother and the brilliant human destined to help Faraday in his world-saving quest. Bill Nighy appears as Thomas Newton, the character made iconic in the 1976 film by David Bowie. Clarke Peters and Annelle Olaleye light up the story as Falls’ ailing father and young daughter (respectively, obviously), and Jimmi Simpson and Kate Mulgrew are the shadowy CIA team on the alien’s trail.

It’s a crowded field that keeps growing as more faces join the ensemble episode by episode. But the number of new faces isn’t what stands in the show’s way. On the contrary, Ejiofor, Harris, and Peters (and later Rob Delaney) have fantastic presence and chemistry, with a comedic edge that ended up being my favorite part of the show overall.

The Man Who Fell To Earth, shepherded to the small screen by Alex Kurtzman and Jenny Lumet, has endless timely issues to confront: immigration, belonging, empathy, racism, climate change, imagination, police brutality, the healthcare system, god, and … the list goes on. If you’re losing track, so is the show. Simply put, there’s too much going on.

All the restraint of the original transforms into flash and drama — which isn’t necessarily a bad thing. I’m not here to bash the show for not aiming for the same strange beats as its cult-classic predecessor. But what beats is the sequel aiming for? I have the sense that the show wants to be much funnier than it is—but there are far too many weighty allegories standing in its way, begging to be hashed out but instead competing for airtime.

In one sequence, Sharon Jones & The Dap-Kings’ jazzy cover of “This Land Is Your Land” plays over Faraday wandering, entirely at loose ends, through a dusty American nowhere. Such moments give insight, at least to me, into the depths that the show was trying to illuminate. At times it gets so tangibly close: Justin and her daughter’s familial intimacy as Harris tucks the little girl in is more effective for the show’s purposes than its CGI visions of catastrophe on an alien world.

It’s in its funniest moments that The Man Who Fell To Earth is at its best and most touching. From Faraday playing improv at the senior care home to literally sniffing out emotions at inopportune times, Ejiofor is undeniably, softly, charmingly funny. As soon as Faraday’s most bumbling stage of assimilation is over, Rob Delaney enters the mix as Hatch Flood, one half of the dysfunctional tech-dynasty sibling duo with the ice-cold Edie Flood (Sonya Cassidy). Delaney’s comedy element is irresistible, comfortably filling out the core-cast dynamic.

Harris gets very few of these shining comedic moments, and Nighy just about none, which does feel like a disservice to their potential performances. (Peters, on the other hand, has an obvious blast making his scenes as raucous and playful as his lines permit.) Meanwhile, Simpson and Mulgrew are off in another world entirely, a shadowy, uber-serious, and sometimes gory spy caper of extremely dubious ethical grounding.

There’s so much about this show that is working: the visuals, for one, especially in the first episode are striking—at times jarringly excellent beside less-than-stellar moments in the writing. The story has an obviously vast imaginative scope that it isn’t afraid to explore. The cast hands in performances that does every one of them proud. But the whole package doesn’t land. There’s something too busy and slippery getting between the show and what it wants to say.

It’s more of a magical adventure than a deep introspective journey, more ET than Asimov: both too obvious and too messy to have the impact it’s looking to achieve. For all that, it isn’t at all bad. It’s simply too much and too out of balance, a well-crafted but unwieldy science-fiction journey.

The show isn’t what it set out to be, but that doesn’t mean it’s nothing. It’s delightful and expansive—and by turns, horrific. We’ve got a terrifying torture scene in the Alaska backwoods and a cutesy dancing scene with grandpa and granddaughter talking about making Eggos. That could work—but it doesn’t. The tonal management just isn’t there.

I’d describe the show very much like how the show describes Justin’s MIT dissertation: it doesn’t succeed at what it intended, but that doesn’t mean it’s necessarily a failure. The show is a worthwhile sequel, crafted with care, talent, and a budget—but it’s haunted by the towering potential of what it could have been.


← At 93, James Hong Received a Hollywood Star and Overdue Appreciation | Vanessa Bayer's Otherwise Promising 'I Love That For You' Can Only End in Disappointment →