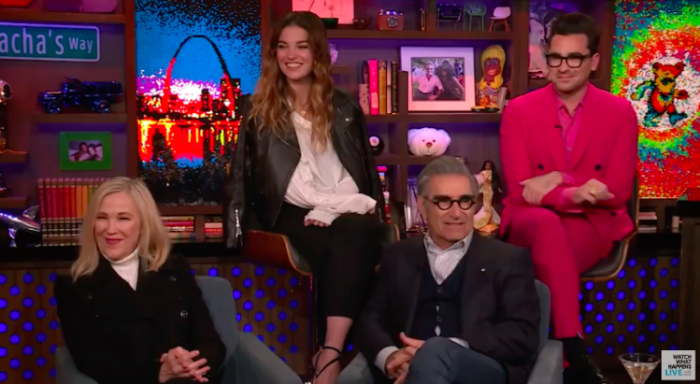 The final season of Schitts’s Creek continues to bestow treasures! We’ve seen the cast get quizzed, rock out with Kelly Clarkson, and now they’s spilling tea—professional and personal—on Watch What Happens Live with Andy Cohen.

The clip below begins with Eugene Levy and Catherine O’Hara reminiscing about their days on SCTV, which is a treat all its own. Next, the cast talks about their favorite episodes of Schitt’s Creek, which leads to Annie Murphy dropping some fun facts about her GALECA-nominated “A Little Bit Alexis.” Then the “iconic Dan Levy” was asked about the show’s proudly queer identity, which led to Levy sharing his story of coming out to his (on and offscreen) father.

ALSO - Dan Levy drops some trivia on us. Long before Kelly Clarkson professed her love for Schitt’s Creek while presenting at the Critics Choice Award or remixed “A Little Bit Alexis,” its co-creator and star appeared in her music video for “Behind These Hazel Eyes.”

Take a look and tell us if you can spot Dan Levy.

In case you missed it, here’s Clarkson calling out her love for the show during this year’s Critics Choice Awards:

One more fun fact for you: one of the people screaming when she says, “Schitt’s Creek is the jam,” it’s me.

← Twitter Reacts To News That Sam Raimi May Direct 'Doctor Strange 2' | Step Aside, Gwyneth: Erykah Badu is Releasing Incense That Smells Like Her Vagina! →