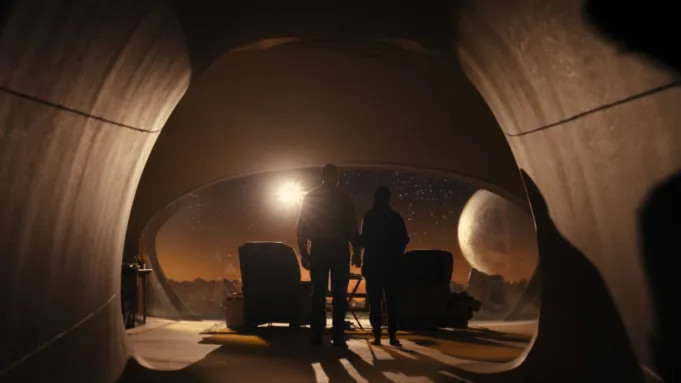 The first episode of The Night Sky is a vision of a much better show than the season ends up delivering. In that first episode, Irene (Sissy Spacek) and Franklin York (J.K. Simmons) are a slow-moving, much-in-love, small-town Indiana couple with one small secret: there’s a portal to another world in their backyard. They don’t know who built it or how it works—but for the last twenty years, they have stepped through the portal periodically to sit in silence and marvel at the sky of another world. It’s a simple, marvelous premise: two people at the end of their long life together, facing failing health and the vast mysteries of space with the humor and grace of people utterly comfortable with and devoted to one another.

There’s a powerful sequence in that first episode when Franklin has forgotten to pick up Irene from a doctor’s appointment—his memory is going, and she’s just gotten bad news that she doesn’t want to burden him with. While she waits, Irene wheels over to the nearby nursing home and visits an older friend with advanced dementia, a woman who can’t keep track of their conversation from one minute to the next. Realizing that, Irene makes a sudden, reckless confession: She knows, somehow, that she must be a very special person because of the wondrous things she’s been blessed to see. Somehow, her small life must have a deep and tremendous meaning.

The first episode is the story of lost souls insisting that they aren’t lost. And maybe they aren’t. It matters more that Franklin can joke about trading some of their many pills than it does that the mechanism of the portal hasn’t been explained. The richness of the story is in its absences, in the humanity of two rich characters facing the unknown.

After that first episode, the show takes a definite turn. Suddenly we’re following a mother and daughter (Julieta Zylberberg and Rocío Hernández) with a mysterious family legacy in the mountains of South America. Then there’s a secretive, dangerous organization of killers hovering in the margins. A beautiful stranger (Chai Hansen) appears through the portal and reveals literally earth-changing secrets. Then there’s gunfire and car chases. The ordinariness of the Yorks is less and less charming and meaningful as the audience pieces together the big picture while the Yorks stay peaceably in the dark—right up until they can’t, in an unsatisfying climax. In short, it goes right off the rails, becoming five shows in one. None of them have breathing room, and the promise of that first episode gets quickly buried.

The Night Sky is an undeniable misfire, but inside the slow first season is a gem of a story. I want to take the whole thing into Final Cut and chop it down to a short film: just Franklin and Irene, puzzling over the possible meaning of their backyard space portal, daring to come closer and closer to the emotional core of what that mystery represents. No cult, no bounty hunters, no strange religious crusades marked by clumsy violence. The beauty of the unknown is what made the first episode tick so damn well, the relation between this devoted, adorable couple marked by loss and its healed scars…and the vast potential for meaning that exists beyond the scope of their ordinary disasters.

That’s tried-and-true sci fi: the deep and most fundamental aspect of the genre. An imagining of an elsewhere, another way of being, that helps us to reimagine and deconceptualize who and what we are in the world we occupy.

As it is, the series so far is an awkward nonstarter with all the right ingredients but a lopsided outcome. But still, there’s something there. I think I’m going to clear out some space on my hard drive for Final Cut.


← Review: Penelope Cruz And Antonio Banderas Devour The Art-House In The Frantically Funny 'Official Competition' | Netflix Is a Joke Is a ... Joke →