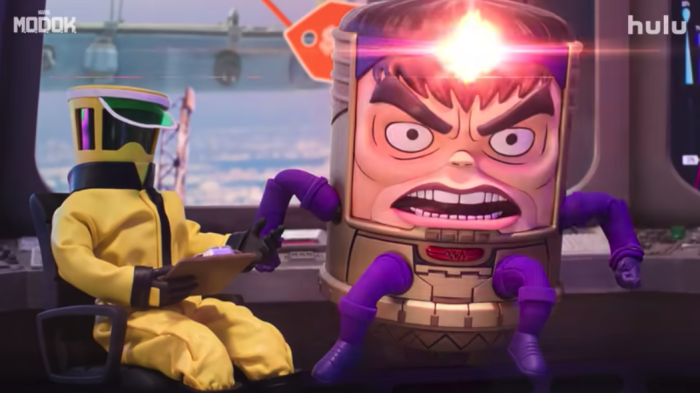 Let me get this out of the way up front: Marvel’s M.O.D.O.K. is no more and no less than it appears. The stop-motion animated supervillain riff, co-created by and starring Patton Oswalt, runs a broad swath of Marvel IP through a Robot Chicken blender. The result is too bloody and gross for kids and filled with the kind of deep-cuts humor that will earn a chuckle out of only the most die-hard comic book fans. None of which is a complaint, really! I’m a fan of Adult Swim and even have a Robot Chicken season on DVD somewhere, and this show is exactly that kinda thing — except that for corporate reasons it happens to be on Hulu (which, since their acquisition of Fox, is majority-controlled by Disney). In a way, the most interesting thing about Marvel’s M.O.D.O.K. is precisely the fact that it is so unapologetically niche, and still somehow came out of Marvel at all. I don’t just mean “niche” as code for “stoners,” either — I mean this show seems to be calibrated precisely to my age group, the “Geriatric Millennials” (thanks I hate it and also feel it in my bones). There’s a pivotal plot-line involving a Third Eye Blind concert, and a gag about the classic TV show Night Court. Even the choice to center a show on M.O.D.O.K., aka the Mental Organism Designed Only for Killing, feels like a targeted in-joke. He may have been introduced in the comics in the 1960s but he’s always looked like a rejected Teenage Mutant Ninja Turtles villain, and best of all he requires zero backstory. He’s a big-headed murdery science bro in a floating chair, ‘nuff said! If this is a sign of the not-so-family-friendly things to come as the Marvel brand spreads its IP onto the other streaming platform and gets weird, I’m cool with it.

The show may not be family-friendly, but it is about family, oddly enough. One of the biggest risks the show takes is focusing not on M.O.D.O.K.’s attempts at world domination but on his domestic life. His marriage to his wannabe lifestyle influencer wife Jodie (Aimee Garcia) is falling apart, and he’s struggling to connect with his kids. His teenage daughter Melissa (Melissa Fumero) is a little bit too much like dear ol’ daddy, while his awkward yet outgoing son Lou is… well, he’s voiced by Ben Schwartz and is the most Ben Schwartz-y character ever. Think Dewey Duck meets Jean-Ralphio, but wearing Crocs. I like the characters of the family, but I’ll be honest — the story felt unbalanced and overly complicated for the first half of the season. I went into the show expecting the humor to rely on M.O.D.O.K.’s megalomaniacal bent, but being a failure as a supervillain is a different flavor of funny than being a failure of a father. The show doesn’t ask you to pity him necessarily, but it does make him achingly, pants-sh*ttingly pathetic in ways that aren’t always amusing. It also takes some getting used to because unlike Robot Chicken, which wove bite-sized conceptual vignettes out of zippy references, M.O.D.O.K. is constructing a linear 10-episode story arc out of that same humor. The first few episodes flounder as the show treads through a Silicon Valley takeover of M.O.D.O.K.’s company, Advanced Idea Mechanics (A.I.M.), as well as his crumbling marriage, but hits its stride by episode six when it introduces… screaming goats. Yup, the first genuine laugh out loud reaction I had to this show, which up to this point had been merely chuckle-worthy, was over a running gag with screaming goats. I’m super mature.

Despite “screaming goats” being the distinct turning point for the season, the back half delivers some satisfying payoffs for our patience. It helps that Nathan Fillion pops up as the hunky Wonder Man, Jodie’s new superhero boyfriend, to make M.O.D.O.K. jealous, but I think the real difference is that M.O.D.O.K. finally starts winning for a change. Or at least not losing as devastatingly. He’s able to thwart the scheme behind the corporate takeover at A.I.M., forges a bond with his kids, and even starts to patch things up with Jodie — just in time for an evil M.O.D.O.K. from the past to show up and give M.O.D.O.K. the win he’s always wanted: World Domination. Turns out that, much like Endgame, there’s only one possible timeline where M.O.D.O.K. rules the world, and it’s the one where his family dies. If (when) there’s a season two, he’ll have to put his freakishly large brain to work trying to undo that tragedy without undoing his place on the throne. Can M.O.D.O.K. find a way to have it all? Would it be any fun if he did?

Marvel’s M.O.D.O.K. bears little to no resemblance to the MCU as we know it. Sure, Iron Man pops up (voiced with perfect cocky detachment by Jon Hamm) and at one point M.O.D.O.K. drops into Asgard through a wormhole, but beyond that, the show focuses on digging deep into the Marvel comics canon for laughs. Here there’s no reason not to mention the Avengers and the X-Men in the same breath, but despite the scope of the sandbox it could be playing in, the series tends to stick with the c-list references (Armadillo and Arcade make appearances, for example). The good news is that those references are mostly window dressing, and no barrier to entry for viewers who aren’t familiar with bottom-of-the-barrel Marvel villains. The bad news is that, without the weird supervillain antics we all came here for, the show is just another sitcom about a dude who isn’t a good boss or a good husband.

I came here for the wacky adventures of a big-headed murdery science bro in a floating chair trying to take over the world — I just didn’t expect it to take ten whole episodes for the show to finally deliver that. Luckily Patton Oswalt holds the whole thing together as a fantastic M.O.D.O.K., even as a sad-sack loser, and I just can’t get mad at a Marvel show that doesn’t take itself seriously.


← Review: "Plan B" Should Be Your Plan A For This Weekend | Jimmy Fallon Channels Guy Fieri In 'Tonight Show' BBQ Challenge →